Encyclopedia
Hearts is an "evasion-type" trick-taking
Trick-taking game
A trick-taking game is a card game or tile-based game in which play centers on a series of finite rounds or units of play, called tricks. The object of such games then may be closely tied to the number of tricks taken, as in plain-trick games such as Whist, Contract Bridge, Napoleon, Rowboat, and...
playing card
Playing card
A playing card is a piece of specially prepared heavy paper, thin cardboard, plastic-coated paper, cotton-paper blend, or thin plastic, marked with distinguishing motifs and used as one of a set for playing card games...
game for four players, although variations can accommodate 3–6 players. The game is also known as The Dirty, Black Lady, Chase the Lady, Crubs, and Black Maria, though any of these may refer to the similar but differently-scored game Black Lady
Black Lady
Black Lady is an extremely combative variant of the card game Whist, similar to the popular game Hearts, that is popular in the United Kingdom...
. The game is regarded as a member of the Whist
Whist
Whist is a classic English trick-taking card game which was played widely in the 18th and 19th centuries. It derives from the 16th century game of Trump or Ruff, via Ruff and Honours...
family of trick-taking games (which also includes Bridge
Contract bridge
Contract bridge, usually known simply as bridge, is a trick-taking card game using a standard deck of 52 playing cards played by four players in two competing partnerships with partners sitting opposite each other around a small table...
and Spades
Spades
Spades is a partnership trick-taking card game devised in the United States in the 1930s, in which the object is for each pair or partnership to take at least the number of tricks they bid on before play began. Spades is a descendant of the Whist family of card games, which also includes Bridge,...
), but the game is unique among Whist variants in that it is an evasion-type game.

The game of Hearts as currently known originated with a family of related games called Reversis
Reversis
Reversis, or more rarely, Réversi, is a very old trick-taking card game of the Hearts group whose origin is supposed to be Italian, transformed into Spain and then in France. It is considered one of the two probable ancestor of Hearts and Black Maria, the other being Conquimbert, or Losing Lodam...
, which became popular around 1750 in Spain. In this game, a penalty point was awarded for each trick won, plus additional points for capturing the Jack of Hearts or the Queen of Hearts. A similar game called Four Jacks centered around avoiding any trick containing a Jack, which were worth one penalty point, and the Jack of Spades worth two.

Over time, additional penalty cards were added to Reverse, and around 1850, the game gave way to a simple variant of Hearts, where each Heart was worth 1 point. The Queen of Spades was introduced in a variant called Black Maria which then became known as the standard Hearts game, and soon thereafter, the idea of "shooting the moon" was introduced to the game to add depth to the gameplay. In the 1920s, the Jack of Diamonds variation (ten positive points) was introduced, and some time later the scoring was reversed so that penalty points were expressed as positive instead of negative. Passing cards, breaking Hearts, and leading the Two of Clubs are more recent additions.

Recently the game has become popular in live play among grade school students in the United States, and is enjoying more widespread popularity through Internet gaming sites and due to a Microsoft
Microsoft
Microsoft Corporation is an American public multinational corporation headquartered in Redmond, Washington, USA that develops, manufactures, licenses, and supports a wide range of products and services predominantly related to computing through its various product divisions...
version of the game packaged with most workstation versions of its popular Windows
Microsoft Windows
Microsoft Windows is a series of operating systems produced by Microsoft.Microsoft introduced an operating environment named Windows on November 20, 1985 as an add-on to MS-DOS in response to the growing interest in graphical user interfaces . Microsoft Windows came to dominate the world's personal...
operating system, beginning in version 3.1 (see Hearts (Windows) for more information on the software game).

A standard deck of 52 playing card
Playing card
A playing card is a piece of specially prepared heavy paper, thin cardboard, plastic-coated paper, cotton-paper blend, or thin plastic, marked with distinguishing motifs and used as one of a set for playing card games...
s is used. The objective of the game is to have the fewest points at the completion of the game. Tricks containing any heart and the queen of spades give points to the winner of the trick. There is no trump
Trump
A trump is a type of card in some card games.Trump may also refer to:* Trump * Trump * Trumps * The Trump * HMS Trump , a British submarine* The Trump Organization, a business conglomerate...
; the highest card of the suit led wins each trick.

Thirteen cards are dealt singly in turn to each of the four players.

The basic game of Hearts does not include card passing, but the most common variants do. Before each hand begins, each player chooses three cards, which they do not want or which they think will be damaging to another player, and pass them to another player. There are many variations on passing; the most common in computer versions of the game (and thus popular in live games) rotates passing through four deals; on the first deal, players pass to the left, the second deal to the right, the third across the table. On the fourth deal no cards are passed; the cycle of four deals is then repeated.

Other variations on the passing rules include:


The play of the game 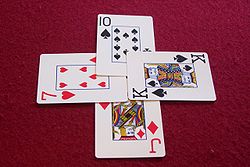 Each heart taken in a trick scores 1 penalty point against the player winning the trick, and taking the queen of spades costs 13 penalty points. There are thus 26 penalty points in each deal. The game ends either when one player reaches or exceeds 100 points, or after a predetermined number of deals or length of time has passed. In either case, the winning player is the one with the fewest penalty points.

Simplified scoring with chips is possible: all players contribute one chip to a central pool of chips and the pool is divided equally among those players taking no penalty cards on a deal; if all players take penalty cards, the pool remains on the table and is added to the next pool; once one player has won all available chips, or once another player has run out, the game ends.

There are many scoring variants including:

Shooting the moon, also known as getting control, capmangoe or running, is a very common scoring variant. If one player takes all the penalty cards on one deal, that player's score remains unchanged while 26 penalty points are added to the scores of each of the other three players. This is known as playing by "old moon" rules. Attempting to shoot the moon is often a risky strategy, as failure to capture even one of the penalty cards will result in the remaining penalty points (as many as 25) being added to one's score. An alternative rule allows giving a player who shoots the moon the option of subtracting 26 points from his or her own score instead of adding 26 to the opponents' scores; this variant is called "New Moon".

Four other sub-variations to the moon rule provide:


The game can easily be played this way with a standard deck. However, as Royal Hearts introduced these new effects in the first place, the variant is not commonly seen when playing with a standard deck. The main advantage to the commercial Royal Hearts deck is that the effects of each card are on their faces; with this new variant easily translating to a standard deck (at half the price), the Hasbro Royal Hearts game did not sell well and was discontinued as of the 2008 Hasbro catalog.
The source of this article is wikipedia, the free encyclopedia.  The text of this article is licensed under the GFDL.