For other uses, see headgear
Headgear
Headgear, headwear or headdress is the name given to any element of clothing which is worn on one's head.Headgear serve a variety of purposes:...
.

Headscarves or head scarves are scarves
Scarf
A scarf is a piece of fabric worn around the neck, or near the head or around the waist for warmth, cleanliness, fashion or for religious reasons. They can come in a variety of different colours.-History:...
covering most or all of the top of a woman's hair and her head. Headscarves may be worn for a variety of purposes, such as for warmth, for sanitation, for fashion
Fashion
Fashion, a general term for a currently popular style or practice, especially in clothing, foot wear, or accessories. Fashion references to anything that is the current trend in look and dress up of a person...
or social
Social
The term social refers to a characteristic of living organisms...
distinction; with religious significance, to hide baldness
Baldness
Baldness implies partial or complete lack of hair and can be understood as part of the wider topic of "hair thinning". The degree and pattern of baldness can vary greatly, but its most common cause is male and female pattern baldness, also known as androgenic alopecia, alopecia androgenetica or...
, out of modesty, or other forms of social convention.

Headscarves may have specific religious
Religion
Religion is a collection of cultural systems, belief systems, and worldviews that establishes symbols that relate humanity to spirituality and, sometimes, to moral values. Many religions have narratives, symbols, traditions and sacred histories that are intended to give meaning to life or to...
significance. Observant married Jewish women, for example, are required to cover their hair, often employing scarves, known as tichel
Tichel
The Tichel also called a Mitpachat is a headscarf worn by married Jewish women in compliance with the code of modesty known as Tzniut. Tichels can range from a very simple plain color cotton square with a simple tie in the back to very elaborate fabrics with very complex ties using multiple fabrics...
s or snoods
Snood (headgear)
A snood is historically a type of European female headgear, or in modern times a tubular neck scarf. In the most common form the headgear resembles a close-fitting hood worn over the back of the head...
, in compliance with the code of modesty known as tzniut
Tzniut
Tzniut is a term used within Judaism and has its greatest influence as a concept within Orthodox Judaism...
.

Headscarves were also worn by married Christian women in medieval Europe, and even by some of the unmarried. This headcovering habit is better known as a wimple
Wimple
A wimple is a garment worn around the neck and chin, and which usually covers the head. Its use developed among women in early medieval Europe . At many stages of medieval culture it was unseemly for a married woman to show her hair...
in English. 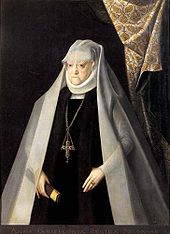 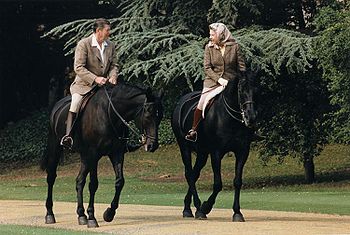 Headscarves and veils are most commonly used by Observant Muslim women. The Muslim religious dress
Islam and clothing
Adherents of Islam are concerned with clothing in two contexts: clothing for everyday wear, inside and outside the house; and clothing required in specifically religious contexts....
include burqa
Burqa
A burqa is an enveloping outer garment worn by women in some Islamic religion to cover their bodies in public places. The burqa is usually understood to be the woman's loose body-covering , plus the head-covering , plus the face-veil .-Etymology:A speculative and unattested etymology...
, chador
Chador
A chādor or chādar is an outer garment or open cloak worn by many Iranian women and female teenagers in public spaces. Wearing this garment is one possible way in which a Muslim woman can follow the Islamic dress code known as ḥijāb. A chador is a full-body-length semicircle of fabric that is...
, niqab
Niqab
A niqab is a cloth which covers the face, worn by some Muslim women as a part of sartorial hijāb...
,
dupatta
Dupatta
Dupatta Dupatta(Urdu: دوپٹا, Hindi: दुपट्टा, Bengali: ওড়না, Sindhi: پوتي, Tamil:துப்பட்ட) Dupatta(Urdu: دوپٹا, Hindi: दुपट्टा, Bengali: ওড়না, Sindhi: پوتي, Tamil:துப்பட்ட) (alternative names include chadar (in Pakistan), orni/odhni, chunri, chunni, orna, and pacheri, is a long,...
, and others. The Arabic word hijab
Hijab
The word "hijab" or "'" refers to both the head covering traditionally worn by Muslim women and modest Muslim styles of dress in general....
, which refers to modest behaviour or dress in general, is often used to describe the headscarf worn by Muslim women. The hijab is worn for religious purposes. Some reasons for Muslim women wearing the hijab would be for modesty and allowing a woman to be judged by her morals, character, and ideals instead of her appearance. A "head dress" could also be worn by men. The most common, keffiyeh
Keffiyeh
The keffiyeh/kufiya , also known as a ghutrah , ' , mashadah , shemagh or in Persian chafiye , Kurdish cemedanî and Turkish puşi, is a traditional Arab headdress fashioned from a square, usually cotton, scarf. It is typically worn by Arab men, as well as some Kurds...
, is worn by men (most commonly Middle Eastern) for cultural purposes rather than religious.

Some English speakers use the word "babushka" (grandma in Russian
Russian language
Russian is a Slavic language used primarily in Russia, Belarus, Uzbekistan, Kazakhstan, Tajikistan and Kyrgyzstan. It is an unofficial but widely spoken language in Ukraine, Moldova, Latvia, Turkmenistan and Estonia and, to a lesser extent, the other countries that were once constituent republics...
) to indicate the headscarf tied below the chin, as commonly worn in Eastern Europe
Eastern Europe
Eastern Europe is the eastern part of Europe. The term has widely disparate geopolitical, geographical, cultural and socioeconomic readings, which makes it highly context-dependent and even volatile, and there are "almost as many definitions of Eastern Europe as there are scholars of the region"...
. In most parts of Eastern Europe, headscarves are used mainly by elderly women (grandmothers) and this led to the use of the "babushka" term. Women in Russia show their convictions to Russian Orthodoxy by wearing headscarves to church. In Chile
Chile
Chile ,officially the Republic of Chile , is a country in South America occupying a long, narrow coastal strip between the Andes mountains to the east and the Pacific Ocean to the west. It borders Peru to the north, Bolivia to the northeast, Argentina to the east, and the Drake Passage in the far...
, Mapuche
Mapuche
The Mapuche are a group of indigenous inhabitants of south-central Chile and southwestern Argentina. They constitute a wide-ranging ethnicity composed of various groups who shared a common social, religious and economic structure, as well as a common linguistic heritage. Their influence extended...
women wear headscarves tied behind the head.

A plain red or scarlet headscarf was worn by female commissars and other women aligning themselves with Bolshevism in times of Russian revolution and civil war.

A head tie
Head tie
A head tie is a West and Southern African women’s cloth head scarf. It is known as a 'Duku' , 'Dhuku' , 'Tukwi' and 'Gele'...
is an elaborate ornamental head covering worn by women of western and southern Africa
Africa
Africa is the world's second largest and second most populous continent, after Asia. At about 30.2 million km² including adjacent islands, it covers 6% of the Earth's total surface area and 20.4% of the total land area...
.

Many women with medical hair loss, due to chemotherapy
Chemotherapy
Chemotherapy is the treatment of cancer with an antineoplastic drug or with a combination of such drugs into a standardized treatment regimen....
, alopecia
Alopecia
Alopecia means loss of hair from the head or body. Alopecia can mean baldness, a term generally reserved for pattern alopecia or androgenic alopecia. Compulsive pulling of hair can also produce hair loss. Hairstyling routines such as tight ponytails or braids may induce Traction alopecia. Both...
or other causes, utilize scarves as protective head coverings.