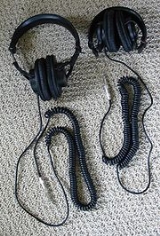 Overview
Headphones are a pair of small loudspeaker
Loudspeaker
A loudspeaker is an electroacoustic transducer that produces sound in response to an electrical audio signal input. Non-electrical loudspeakers were developed as accessories to telephone systems, but electronic amplification by vacuum tube made loudspeakers more generally useful...
s, or less commonly a single speaker, held close to a user's ear
Ear
The ear is the organ that detects sound. It not only receives sound, but also aids in balance and body position. The ear is part of the auditory system....
s and connected to a signal source such as an audio amplifier
Amplifier
Generally, an amplifier or simply amp, is a device for increasing the power of a signal.In popular use, the term usually describes an electronic amplifier, in which the input "signal" is usually a voltage or a current. In audio applications, amplifiers drive the loudspeakers used in PA systems to...
, radio
Radio
Radio is the transmission of signals through free space by modulation of electromagnetic waves with frequencies below those of visible light. Electromagnetic radiation travels by means of oscillating electromagnetic fields that pass through the air and the vacuum of space...
, CD player or portable Media Player
Portable media player
A portable media player or digital audio player, is a consumer electronics device that is capable of storing and playing digital media such as audio, images, video, documents, etc. the data is typically stored on a hard drive, microdrive, or flash memory. In contrast, analog portable audio...
. They are also known as stereophones, headsets or, colloquially, cans. The in-ear versions are known as earphones or earbuds. In the context of telecommunication
Telecommunication
Telecommunication is the transmission of information over significant distances to communicate. In earlier times, telecommunications involved the use of visual signals, such as beacons, smoke signals, semaphore telegraphs, signal flags, and optical heliographs, or audio messages via coded...
, the term headset is used to describe a combination of headphone and microphone
Microphone
A microphone is an acoustic-to-electric transducer or sensor that converts sound into an electrical signal. In 1877, Emile Berliner invented the first microphone used as a telephone voice transmitter...
used for two-way communication
Two-way communication
Two-way communication - uses communication to negotiate with the public, resolve conflict, and promote mutual understanding and respect between the organization and its public. Two-Way Communication in Public Relations...
, for example with a telephone
Telephone
The telephone , colloquially referred to as a phone, is a telecommunications device that transmits and receives sounds, usually the human voice. Telephones are a point-to-point communication system whose most basic function is to allow two people separated by large distances to talk to each other...
.
The telephone earpiece, such as the one pictured at the right, was common at the beginning of the 20th century.

Does the Second Amendment apply to the states because it is incorporated by the Fourteenth Amendment's Privileges and Immunities or Due Process clause...

It is seen that large loud speakers, with large diaphragms, are used for good reproduction of low frequency sound. This is because the resonant freque...
More

My neighbor uses her synthesizer late at night (turned down low, but still disturbing) to practice her singing. If she were to use a headset, would...
More
x