HCO houses a collection of approximately 500,000 astronomical plates taken between the mid-1880s and 1989 (with a gap from 1953–68). This 100-year coverage is a unique resource for studying temporal variations in the universe. A project currently is underway to digitally scan and archive these photographic plates. 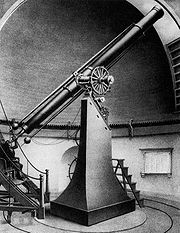 Between 1847 and 1852 Bond and pioneer photographer John Adams Whipple
John Adams Whipple
John Adams Whipple was an American inventor and early photographer. He was the first in the United States to manufacture the chemicals used for daguerreotypes; he pioneered astronomical and night photography; he was a prize-winner for his extraordinary early photographs of the moon; and he was the...
used the Great Refractor
Great refractor
Great refractor refers to a large telescope with a lens, usually the largest refractor at an observatory with an equatorial mount. The preeminence and success of this style in observational astronomy was an era in telescope use in the 19th and early 20th century. Great refractors were large...
telescope to produce images of the moon that are remarkable in their clarity of detail and aesthetic power. This was the largest telescope in North America at that time, and their images of the moon took the prize for technical excellence in photography at the 1851 Great Exhibition
The Great Exhibition
The Great Exhibition of the Works of Industry of all Nations or The Great Exhibition, sometimes referred to as the Crystal Palace Exhibition in reference to the temporary structure in which it was held, was an international exhibition that took place in Hyde Park, London, from 1 May to 15 October...
at The Crystal Palace
The Crystal Palace
The Crystal Palace was a cast-iron and glass building originally erected in Hyde Park, London, England, to house the Great Exhibition of 1851. More than 14,000 exhibitors from around the world gathered in the Palace's of exhibition space to display examples of the latest technology developed in...
in London
London
London is the capital city of :England and the :United Kingdom, the largest metropolitan area in the United Kingdom, and the largest urban zone in the European Union by most measures. Located on the River Thames, London has been a major settlement for two millennia, its history going back to its...
. On the night of July 16–17, 1850, Whipple and Bond made the first daguerreotype
Daguerreotype
The daguerreotype was the first commercially successful photographic process. The image is a direct positive made in the camera on a silvered copper plate....
of a star (Vega).

Harvard College Observatory is historically important to astronomy, as many women including Annie Jump Cannon
Annie Jump Cannon
Annie Jump Cannon was an American astronomer whose cataloging work was instrumental in the development of contemporary stellar classification. With Edward C...
, Henrietta Swan Leavitt
Henrietta Swan Leavitt
Henrietta Swan Leavitt was an American astronomer. A graduate of Radcliffe College, Leavitt went to work in 1893 at the Harvard College Observatory in a menial capacity as a "computer", assigned to count images on photographic plates...
, and Cecilia Payne-Gaposchkin
Cecilia Payne-Gaposchkin
-Further reading:*Rubin, Vera , "Cecilia Payne-Gaposchkin" in OUT OF THE SHADOWS: Contributions of 20th Century Women to Physics, Nina Byers and Gary Williams, ed., Cambridge University Press ....
performed pivotal stellar classification
Stellar classification
In astronomy, stellar classification is a classification of stars based on their spectral characteristics. The spectral class of a star is a designated class of a star describing the ionization of its chromosphere, what atomic excitations are most prominent in the light, giving an objective measure...
research. Cannon and Leavitt were hired initially as "computer
Human computer
The term "computer", in use from the mid 17th century, meant "one who computes": a person performing mathematical calculations, before electronic computers became commercially available....
s" to perform calculations and examine stellar photographs, but later made insightful connections in their research.