Encyclopedia
Harold F. Pitcairn was an American aviation inventor and pioneer. He played a key role in the development of the autogyro
Autogyro
An autogyro , also known as gyroplane, gyrocopter, or rotaplane, is a type of rotorcraft which uses an unpowered rotor in autorotation to develop lift, and an engine-powered propeller, similar to that of a fixed-wing aircraft, to provide thrust...
and founded the Autogiro Company of America. He invented many patents relating to rotary wing aircraft. 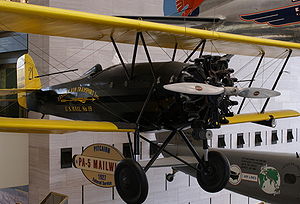 Pitcairn founded Pitcairn Aviation (later to become Eastern Airlines), and Pitcairn Aircraft Company
Pitcairn Aircraft Company
The Pitcairn Aircraft Company was an American aircraft manufacturer of light utility aircraft. An early proponent of the autogyro, the company, later known as the Autogyro Company of America among other names, would remain in business until 1948....
which manufactured efficient airmail biplanes, and autogyros. He bought the right to license Juan de la Cierva
Juan de la Cierva
Juan de la Cierva y Codorníu, 1st Count of De La Cierva was a Spanish civil engineer, pilot and aeronuatical engineer. His most famous accomplishment was the invention in 1920 of the Autogiro, a single-rotor type of aircraft that came to be called autogyro in the English language...
s patents for the United States for $300,000 in 1929.

He was awarded the Collier Trophy
Collier Trophy
The Collier Trophy is an annual aviation award administered by the U.S. National Aeronautics Association , presented to those who have made "the greatest achievement in aeronautics or astronautics in America, with respect to improving the performance, efficiency, and safety of air or space...
in 1930 for development of the autogyro. USA President Hoover
Herbert Hoover
Herbert Clark Hoover was the 31st President of the United States . Hoover was originally a professional mining engineer and author. As the United States Secretary of Commerce in the 1920s under Presidents Warren Harding and Calvin Coolidge, he promoted partnerships between government and business...
awarded the trophy on the lawn of the White House in 1931, where a Pitcairn PCA-2
Pitcairn PCA-2
-External links:*...
landed as the first aircraft ever.