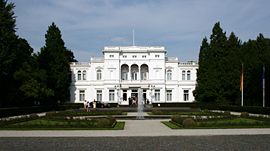 The villa is situated in the heart of the former government district of Bonn, bordering the river Rhine to the north and opposite the zoological Museum Koenig to the south. It is also adjacent to the secondary official residence of the Chancellor
Chancellor of Germany
The Chancellor of Germany is, under the German 1949 constitution, the head of government of Germany...
, the Palais Schaumburg
Palais Schaumburg
The Palais Schaumburg is a castle-like building in Bonn which has housed parts of the German Federal Chancellery since 1949 and from 1976 to reunification was the first official residence and office of the Chancellor...
, to the west.

The upper floor of the building houses a private apartment for the German President while the ground floor consists of state rooms which are used for ceremonial purposes.

Since its construction Villa Hammerschmidt has been owned by: