Encyclopedia
Hamburg-Mitte located in the Free and Hanseatic city of Hamburg
Hamburg
-History:The first historic name for the city was, according to Claudius Ptolemy's reports, Treva.But the city takes its modern name, Hamburg, from the first permanent building on the site, a castle whose construction was ordered by the Emperor Charlemagne in AD 808...
, Germany
Germany
Germany , officially the Federal Republic of Germany , is a federal parliamentary republic in Europe. The country consists of 16 states while the capital and largest city is Berlin. Germany covers an area of 357,021 km2 and has a largely temperate seasonal climate...
is one of the seven boroughs of Hamburg, covering mostly the urban center of the city of Hamburg. The quarters Hamburg-Altstadt (Rough translation: Hamburg old city) and Neustadt (Rough translation: new city) are the historical origin of Hamburg. In 2006 the population was 233,144.

In 1937 several settlements (e.g. Finkenwerder), villages and rural areas were passed into Hamburg enforced by the Greater Hamburg Act.

The borough severs Hamburg from the east to the west. In 2006, according to the statistical office of Hamburg and Schleswig-Holstein, Hamburg-Mitte has a total area of 107.1 square kilometres (41 sq mi).

In 2006 in the borough were living 233,144 people. The population density was 2177 PD/sqkm. 14.9% were children under the age of 18, and 15.6% were 65 years of age or older. 43% belong to ethnic minorities . 17,550 people were registered as unemployed and 72,608 were employees subject to social insurance
Social insurance
Social insurance is any government-sponsored program with the following four characteristics:* the benefits, eligibility requirements and other aspects of the program are defined by statute;...
contributions.


Diet of the borough

Simultaneously with elections to the state parliament (Bürgerschaft), the Bezirksversammlung is elected as representatives of the citizens. It consists of 53 representatives. 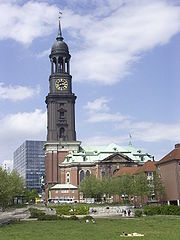 Planten un Blomen
Planten un Blomen
Planten un Blomen is a park with a size of 47 hectares in the center of Hamburg. The name is Low German for plants and flowers.-Overview:The first plant was a Platanus, planted by Johann Georg Christian Lehmann in November 1821...
(plants and flowers) is a park located in the quarter St. Pauli
St. Pauli
St. Pauli , located in the Hamburg-Mitte borough, is one of the 105 quarters of the city of Hamburg, Germany. Situated on the right bank of the Elbe river, the Landungsbrücken are a northern part of the port of Hamburg. St. Pauli contains a world famous red light district around the street Reeperbahn...
and Neustadt. Located in the quarter Billstedt
Billstedt
Billstedt is a quarter in the borough Hamburg-Mitte, in the eastern part of Hamburg, Germany. In 2007, the population was 68,936, it was the second-most populous quarter.-History:Schifbeck, Öjendorff, Steinbeck and Schlem are the old settlements....
is the lake Öjendorfer See
Öjendorfer See
Öjendorfer See is a lake in Billstedt , Hamburg, Germany. Its surface area is 460,000 m².- External links :...
.

The facilities of the port of Hamburg are located mostly in Hamburg-Mitte in the quarters Kleiner Grasbrook, Steinwerder, Veddel, Waltershof and Wilhelmsburg.

There were 125 day-care centers for children and 536 physicians in private practice and 72 pharmacies.
The Asklepios Klinik St. Georg located in the quarter St. Georg, is the main hospital in Hamburg-Mitte.

According to the Department of Motor Vehicles (Kraftfahrt-Bundesamt), in the borough Hamburg-Mitte were 66,831 private cars registered (290 cars/1000 people). There were 2,432 traffic accidents total, including 1,905 traffic accidents with damage to persons.