In August 1995, the Secretary of the Navy
United States Secretary of the Navy
The Secretary of the Navy of the United States of America is the head of the Department of the Navy, a component organization of the Department of Defense...
authorized the Marine Corps to upgrade its utility and attack helicopters as a bridge until the Joint Replacement Aircraft
Joint Replacement Aircraft
The Joint Replacement Aircraft was a US Defense Department project to build a common utility aircraft that would replace the UH-1N Twin Huey, AH-1 SuperCobra, all variants of the UH-60 and SH-60, and the AH-64 Apache. The project appears to have been canceled.-External links:*...
was available in 2020. In 1996, the Marine Corps launched the H-1 upgrade program by signing a contract with Bell for upgrading 180 AH-1Ws into AH-1Zs and upgrading 100 UH-1Ns into UH-1Ys. While the original contract called for upgrading existing airframes, it was later modified in 2008 to manufacture completely new aircraft. The program also includes aircraft simulators. Richard Aboulafia, an analyst at the Teal Group, suggests that the motivation to upgrade the H-1s instead of buying new Sikorsky UH-60 Black Hawk
Sikorsky UH-60 Black Hawk
The UH-60 Black Hawk is a four-bladed, twin-engine, medium-lift utility helicopter manufactured by Sikorsky Aircraft. Sikorsky submitted the S-70 design for the United States Army's Utility Tactical Transport Aircraft System competition in 1972...
and Boeing AH-64 Apache helicopters was to avoid risk to the Bell-Boeing V-22 Osprey program.

The AH-1Z completed sea-trial flight testing in May 2005. On 15 October 2005, the USMC, through the Naval Air Systems Command, accepted delivery of the first AH-1Z production helicopter to enter the fleet. During the first quarter of 2006, the first production model UH-1Y completed its first flight, and the aircraft were transferred to the Operational Test Unit at the NAS Patuxent River to began operational evaluation (OPEVAL) testing. In February 2008, Bell received a contract for the last 40 AH-1Zs to be built as new airframes instead of the previously planned rebuild of AH-1Ws. Also that same month, the AH-1Z and UH-1Y began the second and final portion of OPEVAL testing.

Bell delivered three upgraded H-1s to the Marine Corps in February 2008. In September 2008, the NAVAIR proposed adding 46 additional AH-1Zs bringing the total number ordered to 226. The additional aircraft will appear on the 2010 fiscal budget request. The final number of UH-1Y acquisitions was also set at 123. Full-rate production was approved in late 2008. 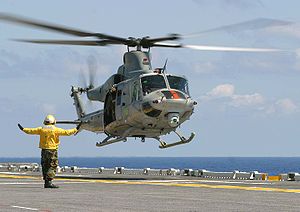 The stated mission of the H-1 upgrade program is to "resolve existing safety deficiencies, significantly improve operational capabilities, and reduce life-cycle costs. Commonality between aircraft will greatly enhance the maintainability and deployability of the systems with the capability to support and operate both aircraft within the same squadron structure." Reduced logistical
Military logistics
Military logistics is the discipline of planning and carrying out the movement and maintenance of military forces. In its most comprehensive sense, it is those aspects or military operations that deal with:...
burden, maintenance costs, and personnel requirements (all of which increase the expeditionary
Expeditionary warfare
Expeditionary warfare is used to describe the organization of a state's military to fight abroad, especially when deployed to fight away from its established bases at home or abroad. Expeditionary forces were in part the antecedent of the modern concept of Rapid Deployment Forces...
capabilities of the aircraft) are possible by the increased commonality of the two airframes, as well as increased reliability of individual components.

The AH-1Z and UH-1Y share a common tail boom, engines, rotor system, drive train, avionics architecture, software, controls and displays for over 84% identical components. Both aircraft use twin General Electric T700-GE-401C turboshaft
Turboshaft
A turboshaft engine is a form of gas turbine which is optimized to produce free turbine shaft power, rather than jet thrust...
outputting 1,800 shp (1,350 kW) each. Upgrades will also be made to the transmission
Transmission (mechanics)
A machine consists of a power source and a power transmission system, which provides controlled application of the power. Merriam-Webster defines transmission as: an assembly of parts including the speed-changing gears and the propeller shaft by which the power is transmitted from an engine to a...
(rated for 2350 hp) and skid landing gear.

The existing two-bladed semi-rigid, teetering rotor system is being replaced with a four-bladed, hingeless, bearingless composite rotor system. The improvement in flight characteristics provided by the four-bladed configuration has led to increases in flight envelope, maximum speed, vertical rate-of-climb, payload and reduced rotor vibration. The rotor system has 75% fewer parts than that of four-bladed articulated systems, and the improved yokes allow for weight saving with the elimination of all bearings, hinges, and vibration absorbers in the rotor hub. The blades are made of carbon fiber
Carbon fiber
Carbon fiber, alternatively graphite fiber, carbon graphite or CF, is a material consisting of fibers about 5–10 μm in diameter and composed mostly of carbon atoms. The carbon atoms are bonded together in crystals that are more or less aligned parallel to the long axis of the fiber...
-based composites, which have an increased ballistic survivability, and there is a semiautomatic folding system for stowage aboard Amphibious assault ship
Amphibious assault ship
An amphibious assault ship is a type of amphibious warfare ship employed to land and support ground forces on enemy territory by an amphibious assault...
s. Both helicopters will receive an upgraded, four blade tail rotor
Tail rotor
The tail rotor, or anti-torque rotor, is a smaller rotor mounted so that it rotates vertically or near-vertically at the end of the tail of a traditional single-rotor helicopter. The tail rotor's position and distance from the center of gravity allow it to develop thrust in the same direction as...
and drive system.

The new integrated avionics system (IAS) has been developed by Northrop Grumman
Northrop Grumman
Northrop Grumman Corporation is an American global aerospace and defense technology company formed by the 1994 purchase of Grumman by Northrop. The company was the fourth-largest defense contractor in the world as of 2010, and the largest builder of naval vessels. Northrop Grumman employs over...
. The system includes two mission computers, an automatic flight control system (reportedly "stops short of a fly-by-wire
Fly-by-wire
Fly-by-wire is a system that replaces the conventional manual flight controls of an aircraft with an electronic interface. The movements of flight controls are converted to electronic signals transmitted by wires , and flight control computers determine how to move the actuators at each control...
system"), and a glass cockpit
Glass cockpit
A glass cockpit is an aircraft cockpit that features electronic instrument displays, typically large LCD screens, as opposed to the traditional style of analog dials and gauges...
; Bell suggests the system can withstand 23 mm caliber fire. Each crew station has two 8 by multifunction liquid crystal display
Liquid crystal display
A liquid crystal display is a flat panel display, electronic visual display, or video display that uses the light modulating properties of liquid crystals . LCs do not emit light directly....
s (LCD) and one 4.2 by dual function LCD display. The communications suite combines a US Navy RT-1824 integrated radio, UHF/VHF, COMSEC, and modem in a single unit. The navigation suite includes an embedded GPS
Global Positioning System
The Global Positioning System is a space-based global navigation satellite system that provides location and time information in all weather, anywhere on or near the Earth, where there is an unobstructed line of sight to four or more GPS satellites...
inertial navigation system (EGI), a digital map system and a low-airspeed air data subsystem, which allows weapons delivery when hovering. The new cockpit systems will increase joint interoperability, now able to transmit and receive date from ground and air systems from other branches.
The Lockheed Martin
Lockheed Martin
Lockheed Martin is an American global aerospace, defense, security, and advanced technology company with worldwide interests. It was formed by the merger of Lockheed Corporation with Martin Marietta in March 1995. It is headquartered in Bethesda, Maryland, in the Washington Metropolitan Area....
target sight system (TSS) incorporates a third-generation FLIR sensor. The TSS provides target sighting in day, night or adverse weather conditions. The system has various view modes and can track with FLIR or by TV. It is also used on the KC-130J Harvest HAWK.
The pilot and copilot are equipped with the Thales
Thales Group
The Thales Group is a French electronics company delivering information systems and services for the aerospace, defense, transportation and security markets...
"Top Owl" helmet-mounted sight and display
Helmet mounted display
A helmet mounted display is a device used in some modern aircraft, especially combat aircraft. HMDs project information similar to that of head-up displays on an aircrew’s visor or reticle, thereby allowing him to obtain situational awareness and/or cue weapons systems to the direction his head...
system. The Top Owl has a 24-hour day/night capability and a binocular display with a 40° field of view. Its visor projection provides forward looking infrared
Forward looking infrared
Forward looking infrared cameras, typically used on military aircraft, use an imaging technology that senses infrared radiation.The sensors installed in forward looking infrared cameras, as well as those of other thermal imaging cameras, use detection of infrared radiation, typically emitted from a...
(FLIR) or video imagery. However, the Corps has decided to augment it with existing night vision devices.

Its two redesigned wing stubs are longer, with each adding a wing-tip station for a missile such as the AIM-9 Sidewinder
AIM-9 Sidewinder
The AIM-9 Sidewinder is a heat-seeking, short-range, air-to-air missile carried mostly by fighter aircraft and recently, certain gunship helicopters. The missile entered service with United States Air Force in the early 1950s, and variants and upgrades remain in active service with many air forces...
. Each wing has two other stations for 2.75 inches (69.9 mm) Hydra 70
Hydra 70
The Hydra 70 rocket is a weapon derived from the 70 mm Mk 4/Mk 40 Folding-Fin Aerial Rocket developed by the United States Navy for use as a free-flight aerial rocket in the late 1940s.-Overview:...
rocket pods, or AGM-114 Hellfire
AGM-114 Hellfire
The AGM-114 Hellfire is an air-to-surface missile developed primarily for anti-armor use. It has multi-mission, multi-target precision-strike capability, and can be launched from multiple air, sea, and ground platforms. The Hellfire missile is the primary 100 lb-class air-to-ground precision...
quad missile launchers. The Longbow radar can also be mounted on a wing tip station. It will be able to cruise at approximately 135 to 140 kn (264.6 to 274.4 km/h) and sprint at 180 knots (352.8 km/h) before suffering the limits of parasitic drag
Parasitic drag
Parasitic drag is drag caused by moving a solid object through a fluid medium . Parasitic drag is made up of many components, the most prominent being form drag...
.

One of the most critical UH-1Y upgrades is in its powertrain
Powertrain
In a motor vehicle, the term powertrain or powerplant refers to the group of components that generate power and deliver it to the road surface, water, or air. This includes the engine, transmission, drive shafts, differentials, and the final drive...
. The UH-1N gradually became burdened with various upgrades: avionics, radios, modern door guns, and safety upgrades; all increasing the UH-1N's empty weight. With a maximum speed of approximately 100 knots (196 km/h) and an inability to lift much more than its own crew, fuel and ammunition, the UH-1N became limited in its utility. However, the UH-1Y has upgraded engines and transmission, 170% increased payload, and almost 50% greater range and maximum speed. The fuselage has been lengthened by 21 inches (53.3 cm) just forward of the main door for more capacity.