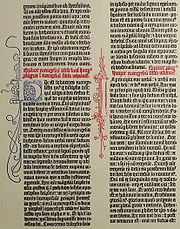 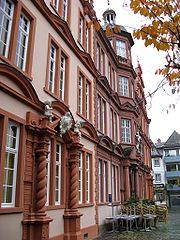 The Gutenberg Museum is one of the oldest museums of printing
Printing
Printing is a process for reproducing text and image, typically with ink on paper using a printing press. It is often carried out as a large-scale industrial process, and is an essential part of publishing and transaction printing....
in the world, located opposite the cathedral
Mainz Cathedral
Mainz Cathedral or St. Martin's Cathedral is located near the historical center and pedestrianized market square of the city of Mainz, Germany...
in the old part of Mainz
Mainz
Mainz under the Holy Roman Empire, and previously was a Roman fort city which commanded the west bank of the Rhine and formed part of the northernmost frontier of the Roman Empire...
, Germany
Germany
Germany , officially the Federal Republic of Germany , is a federal parliamentary republic in Europe. The country consists of 16 states while the capital and largest city is Berlin. Germany covers an area of 357,021 km2 and has a largely temperate seasonal climate...
. It is named after Johann Gutenberg, the inventor of printing from moveable metal type. The collections include printing equipment and examples of printed materials from many cultures.

A group of citizens founded the museum in 1900, 500 years after Johann Gutenberg’s birth, to honor the inventor and present his technical and artistic achievements to the public at large. They also aimed to exhibit the writing and printing of as many different cultures as possible.

Publishers, manufacturers of printing machines and printing houses donated books, apparatus and machines, which formed the basis of the collection. In its first few years the museum was part of the city library, meaning that the most beautiful and characteristic volumes from the library’s extensive collection could be requisitioned for the museum. Visitors were thus presented with a survey of almost 500 years of the printed book. In time the museum expanded to include sections on printing techniques, book art, job printing and ex-libris, graphics and posters, paper, the history of writing of all cultures of the world and modern artists’ books.

The Gutenberg Museum was originally laid out in two rooms at the Kurfürstliches Schloß (Electoral Palace Mainz
Electoral Palace Mainz
250 px|thumb|The Electoral Palace, from the southThe Electoral Palace in Mainz is the former city Residenz of the Archbishop of Mainz, who was also Prince-Elector of his electoral state within the Holy Roman Empire...
), which also accommodated the city library. The museum moved into the new library building on the Rheinallee in 1912. The same year, 1925, saw the installation of a reconstruction of Gutenberg’s workshop which soon became one of the museum’s main attractions. Type founding, typesetting and printing could now be demonstrated visually. The replica of Gutenberg’s printing press, rebuilt according 15th- and 16th-century woodcuts, proved an object of great interest to visitors and was henceforth shown at a large number of exhibitions all over the world.

In 1927 the museum was able to move into the Zum Römischen Kaiser (1664), one of the most beautiful buildings in Mainz. This is now where the museum’s administration, the restoration workshop, library and Gutenberg Society are housed. The Late Renaissance building was heavily bombed in 1945; the museum’s contents had been stored in a safe place and thus remained intact. In 1962, the restoration of the Römischer Kaiser was complete. A new, modern exhibition building was also opened in the place where once the guest house König von England stood.

The museum made several important acquisitions in the following years, among them a second Gutenberg Bible
Gutenberg Bible
The Gutenberg Bible was the first major book printed with a movable type printing press, and marked the start of the "Gutenberg Revolution" and the age of the printed book. Widely praised for its high aesthetic and artistic qualities, the book has an iconic status...
, the Shuckburgh Bible in two volumes (1978), and two block books printed using wooden formes and today extremely rare. Another major change was the introduction of the museum’s educational unit in 1989. In 2000, the old museum building was restored and extended.