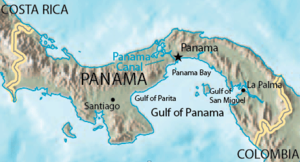 The Gulf of Panama is a gulf
Headlands and bays
Headlands and bays are two related features of the coastal environment.- Geology and geography :Headlands and bays are often found on the same coastline. A bay is surrounded by land on three sides, whereas a headland is surrounded by water on three sides. Headlands are characterized by high,...
in the Pacific Ocean
Pacific Ocean
The Pacific Ocean is the largest of the Earth's oceanic divisions. It extends from the Arctic in the north to the Southern Ocean in the south, bounded by Asia and Australia in the west, and the Americas in the east.At 165.2 million square kilometres in area, this largest division of the World...
, near the southern coast of Panama
Panama
Panama , officially the Republic of Panama , is the southernmost country of Central America. Situated on the isthmus connecting North and South America, it is bordered by Costa Rica to the northwest, Colombia to the southeast, the Caribbean Sea to the north and the Pacific Ocean to the south. The...
. It has a maximum width of 250 kilometres (155.3 mi), a maximum depth of 220 metres (721.8 ft) and the size of 2400 sqkm. The Panama Canal
Panama Canal
The Panama Canal is a ship canal in Panama that joins the Atlantic Ocean and the Pacific Ocean and is a key conduit for international maritime trade. Built from 1904 to 1914, the canal has seen annual traffic rise from about 1,000 ships early on to 14,702 vessels measuring a total of 309.6...
connects the Gulf of Panama with the Caribbean Sea
Caribbean Sea
The Caribbean Sea is a sea of the Atlantic Ocean located in the tropics of the Western hemisphere. It is bounded by Mexico and Central America to the west and southwest, to the north by the Greater Antilles, and to the east by the Lesser Antilles....
and the Atlantic Ocean
Atlantic Ocean
The Atlantic Ocean is the second-largest of the world's oceanic divisions. With a total area of about , it covers approximately 20% of the Earth's surface and about 26% of its water surface area...
. The Panamanian capital Panama City
Panama City
Panama is the capital and largest city of the Republic of Panama. It has a population of 880,691, with a total metro population of 1,272,672, and it is located at the Pacific entrance of the Panama Canal, in the province of the same name. The city is the political and administrative center of the...
is the main urban centre on the gulf shore.

The gulf itself also contains a few minor gulfs, with Panama Bay
Panama Bay
Panama Bay is a large body of water off the coast of southern Panama, at . It is a part of the greater Gulf of Panama....
to the north, Gulf of Parita
Gulf of Parita
Gulf of Parita or Parita Bay is a large body of water off the coast of Herrera Province, Panama, at . It forms the western side of the Gulf of Panama, between Puerto Obaldia, Coclé, and the mouth of the Rio Grande....
to the west and Gulf of San Miguel to the east. The gulf has a few islands and on the coast there are a few important ports, like Panama City, La Palma
La Palma, Panama
La Palma is located at the mouth of the Río Tuira, where the wide river meets the Golfo de San Miguel. The Chucunaque joins the Tuira farther south. La Palma is the provincial capital of Darién Province and the most populous town in the region. However, despite its lofty position as capital of the...
and Chitrè
Chitré
Chitré is the capital of the Panamanian province Herrera. Chitré is located about 7 km inland from the Gulf of Panama on the Azuero Peninsula The name Chitre comes from the native tribe Chitra . In the city, there is a district, also called Chitré, which is subdivided into five corregimientos...
. Pearl Islands
Pearl Islands
The Pearl Islands are a group of 100 or more islands lying about off the Pacific coast of Panama in the Gulf of Panama.- Islands :...
is a group of over two hundred islands situated to the east in the gulf.

Panama’s largest river, Tuira
Tuira River
The Tuira River is located in the Darién Province of eastern Panama. It flows into the Bay of San Miguel at the province capital of La Palma.It is the largest river in Panama, and one of its tributaries, the Chucunaque River, is the longeset river in Panama....
, flows south into the Gulf of San Miguel.
The source of this article is wikipedia, the free encyclopedia.  The text of this article is licensed under the GFDL.