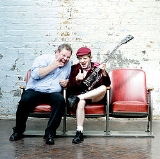 Encyclopedia
Guido Karp is a German
Germany
Germany , officially the Federal Republic of Germany , is a federal parliamentary republic in Europe. The country consists of 16 states while the capital and largest city is Berlin. Germany covers an area of 357,021 km2 and has a largely temperate seasonal climate...
music photographer.
Karp was born in Mayen
Mayen
Mayen is a town in the Mayen-Koblenz District of the Rhineland-Palatinate Federal State of Germany, in the eastern part of the Volcanic Eifel Region. As well as the main town, there are five further settlements which are part of Mayen, they are: Alzheim, Kürrenberg, Hausen-Betzing, Hausen and Nitztal...
, Germany and grew up in Koblenz
Koblenz
Koblenz is a German city situated on both banks of the Rhine at its confluence with the Moselle, where the Deutsches Eck and its monument are situated.As Koblenz was one of the military posts established by Drusus about 8 BC, the...
, Germany. He started concert photography early with regional bands, but had his first cover with a school-mate, Thomas Anders
Thomas Anders
Thomas Anders is a German singer, composer and record producer. Anders was the lead singer of Germany's popular pop-duo Modern Talking in 1984–1987 and in 1998–2003.-Early years:...
, who later came to fame as singer of the top-selling Euro-Band Modern Talking
Modern Talking
Modern Talking was a German dance pop duo consisting of Thomas Anders and Dieter Bohlen. Their music has often been classified as Europop. They have been referred to as Germany's most successful pop duo, and have had a number of hit singles, reaching the top 5 in many countries...
. Karp's photography has been used on many music CD and DVD covers, with top sellers as Robbie Williams
Robbie Williams
Robert Peter "Robbie" Williams is an English singer-songwriter, vocal coach and occasional actor. He is a member of the pop group Take That. Williams rose to fame in the band's first run in the early- to mid-1990s. After many disagreements with the management and certain group members, Williams...
"Live at the Albert
Live at the Albert
"Robbie Williams: Live at the Albert" is a DVD that was released in December 2001 of the show performed on 10 October 2001; concert that Robbie Williams gave at Royal Albert Hall a month before the release of the album Swing When You're Winning...
" (the best selling Music DVD of all times) or Elton John
Elton John
Sir Elton Hercules John, CBE, Hon DMus is an English rock singer-songwriter, composer, pianist and occasional actor...
's "Candle in the Wind
Candle in the Wind
"Candle in the Wind" is a song with music by Elton John and lyrics by Bernie Taupin. It was originally written in 1973, in honour of Marilyn Monroe, who had died 11 years earlier....
" (the best selling single record of all times). His most recent work is seen in AC/DC
AC/DC
AC/DC are an Australian rock band, formed in 1973 by brothers Malcolm and Angus Young. Commonly classified as hard rock, they are considered pioneers of heavy metal, though they themselves have always classified their music as simply "rock and roll"...
's 2008 release Black Ice
Black Ice (album)
Black Ice is the 15th Australian and 14th international studio album by the Australian hard rock band AC/DC. It was produced by Brendan O'Brien and released internationally on 17 October 2008. Guitarists Angus Young and Malcolm Young got together in London in 2003 to start composing tracks...
. The promotional shots from the session were featured in more than 10000 print publications since Oct 2008.

Before joining the AC/DC European tour in March, Karp toured Germany, Austria and Switzerland with the hugely successful beauty event "Princess for one day".

Karp is married to Nicole Karp since Dec 28, 2004 and owns homes in Hoehr-Grenzhausen, Germany and Los Angeles, CA.

Guido Karp was nominated as Music Photographer of the Year in 1987, 1988 and 1992, winning in 1988 and 1992 in the categories "Best Concert Photography" (Award Ceremony broadcasted live "Diamond Awards Festival in Antwerp, Belgium throughout Europe).