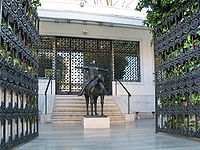 The Guggenheim family is an American family, of Swiss Jewish ancestry. Beginning with Meyer Guggenheim
Meyer Guggenheim
Meyer Guggenheim was the patriarch of what became known as the Guggenheim family. He was born in Lengnau, Aargau, Switzerland, was of German Jewish ancestry and emigrated to the United States in 1847...
, who arrived in America in 1847, the family were known for their global successes in mining
Mining
Mining is the extraction of valuable minerals or other geological materials from the earth, from an ore body, vein or seam. The term also includes the removal of soil. Materials recovered by mining include base metals, precious metals, iron, uranium, coal, diamonds, limestone, oil shale, rock...
and smelting
Smelting
Smelting is a form of extractive metallurgy; its main use is to produce a metal from its ore. This includes iron extraction from iron ore, and copper extraction and other base metals from their ores...
(including the American Smelting And Refining Company). During the 19th century, the family possessed one of the largest fortunes in the world. They later became known for their philanthropy
Philanthropy
Philanthropy etymologically means "the love of humanity"—love in the sense of caring for, nourishing, developing, or enhancing; humanity in the sense of "what it is to be human," or "human potential." In modern practical terms, it is "private initiatives for public good, focusing on quality of...
in diverse areas such as modern art
Modern art
Modern art includes artistic works produced during the period extending roughly from the 1860s to the 1970s, and denotes the style and philosophy of the art produced during that era. The term is usually associated with art in which the traditions of the past have been thrown aside in a spirit of...
and aviation
Aviation
Aviation is the design, development, production, operation, and use of aircraft, especially heavier-than-air aircraft. Aviation is derived from avis, the Latin word for bird.-History:...
, including several Guggenheim Museums as well as the Guggenheim Aeronautical Laboratory
Guggenheim Aeronautical Laboratory
The Guggenheim Aeronautical Laboratory at the California Institute of Technology , was a research institute created in 1926, at first specializing in aeronautics research. In 1930, Hungarian scientist Theodore von Kármán accepted the directorship of the lab and emigrated to the United States. Under...
and I. M. Pei's
I. M. Pei
Ieoh Ming Pei , commonly known as I. M. Pei, is a Chinese American architect, often called a master of modern architecture. Born in Canton, China and raised in Hong Kong and Shanghai, Pei drew inspiration at an early age from the gardens at Suzhou...
Guggenheim Pavilion at Mount Sinai Medical Center
Mount Sinai Hospital, New York
Mount Sinai Hospital, founded in 1852, is one of the oldest and largest teaching hospitals in the United States. In 2011-2012, Mount Sinai Hospital was ranked as one of America's best hospitals by U.S...
in New York City
New York City
New York is the most populous city in the United States and the center of the New York Metropolitan Area, one of the most populous metropolitan areas in the world. New York exerts a significant impact upon global commerce, finance, media, art, fashion, research, technology, education, and...
. They sold off their global mining interests following World War I, then later purchased nitrate mines in Chile. Subsequently, the family largely left business. However, one family investment company, Guggenheim Partners
Guggenheim Partners
Guggenheim Partners, LLC is a privately held, diversified financial services firm that engages in investment banking, capital markets services, investment management, and investment advisory. The firm is headquartered in Chicago and New York with over 1,400 professionals located in 20 cities...
, today manages over $100 billion assets. Another family vehicle, Guggenheim Investment Advisors, oversees about $50 billion in assets.
Members of the Meyer Guggenheim family include:
Barbara King-Farlowe
John King-Farlowe

It is alleged by the FBI that over 2010 and early 2011 three grifters by the names of Catarina Pietra Toumei Toumei, 45, David Birnbaum from Brooklyn, 67, and Vladimir Zuravel, 45, from Queens allegedly represented as members of the Guggenheim family and tried to swindle investors of billions of dollars as they tried to sell them $1bn of diamonds "from the private collection of the Guggenheim family", a batch of "Guggenheim Vodka", and $4bn worth of crude oil from a Guggenheim-owned refinery in China. Reports stated that the FBI are looking for the alleged criminals and quoted Preet Bharara
Preet Bharara
Preetinder S. Bharara , commonly known as Preet Bharara, is U.S. Attorney for the Southern District of New York.-Early life and education:Bharara was born in 1968 in Firozpur, Punjab, India, to a Sikh father and Hindu mother...
, U.S. Attorney for the Southern District of New York as saying "The defendants allegedly impersonated one of America's most famous families to fleece potential victims by pitching bogus investments,".

Toumei, of Rancho Santa Fe, California who later surrendered and was released on a bond of $200,000 is said to have claimed to have been married to John Ratzenberger
John Ratzenberger
John Deszo Ratzenberger is an American actor, voice actor, and entrepreneur. He is best known for his role as Cliff Clavin in Cheers.-Early life:...
, an actor with roles in the famous sitcom Cheers and in animation film Toy Story 3. Ratzenberger's publicist said they had a "short lived relationship" and that Ratzenberger was unaware of any criminal activity.

David Birnbaum and Vladimir Zuravel have been charged in the failed scheme. Zuravel claims that Birnbaum was a legitimate heir of the Guggenheim family.