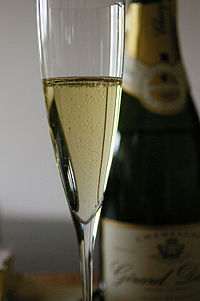 Grower Champagnes are sparkling wine
Sparkling wine
Sparkling wine is a wine with significant levels of carbon dioxide in it making it fizzy. The carbon dioxide may result from natural fermentation, either in a bottle, as with the méthode champenoise, in a large tank designed to withstand the pressures involved , or as a result of carbon dioxide...
s made in the Champagne region of France that are produced by the same estate that owns the vineyards from which the grapes come. While large Champagne houses, such as Mumm
Mumm
G. H. Mumm & Cie, situated in Reims in northern France, is one of the largest Champagne producers worldwide.- History :It was founded by three brothers, Jacobus, Gottlieb and Phillip Mumm, German winemakers from the Rhine valley and G. Heuser and Friedrich Giesler on March 1, 1827 as P. A. Mumm...
, may use grapes sourced from as many as 80 different vineyards, Grower Champagnes tend to be more terroir
Terroir
Terroir comes from the word terre "land". It was originally a French term in wine, coffee and tea used to denote the special characteristics that the geography, geology and climate of a certain place bestowed upon particular varieties...
focused, being sourced from single or closely located vineyards around a village. Today there are over 19,000 independent growers in the Champagne region, accounting for nearly 88% of all vineyard land in the region. Around 5000 of these growers produce wine from their own grapes. A Grower Champagne can be identified by the initials RM (meaning Récoltant-Manipulant) on the wine label
Wine label
Wine labels are important sources of information for consumers since they tell the type and origin of the wine. The label is often the only resource a buyer has for evaluating the wine before purchasing it...
.

Grower Champagnes have been described as "artisanal winemaking
Winemaking
Winemaking, or vinification, is the production of wine, starting with selection of the grapes or other produce and ending with bottling the finished wine. Although most wine is made from grapes, it may also be made from other fruit or non-toxic plant material...
" with terroir being at the forefront for each wine, rather than an emphasis on a consistent "house style" that can be made year after year. While large Champagne houses, such as Moët et Chandon
Moët et Chandon
Moët & Chandon , or Moët, is a French winery and co-owner of the luxury goods company Moët-Hennessy • Louis Vuitton. Moët et Chandon is one of the world's largest champagne producers and a prominent champagne house. The company holds a Royal Warrant to supply champagne to Elizabeth II...
may source grapes from the entire Champagne region, the vineyards owned by a Grower Champagne maker are generally clustered around a single village. Some growers will craft their wine to reflect the terroir of that village, especially if they own vineyards in one of Champagne's Grand crus. Grower Champagnes are often released younger than their large house counterparts due, in part, to the greater financial resources that would be needed for long term aging and storage. Many also show a lower dosage, and occasionally no dosage at all, than most negociant manipulant bottlings.

The popularity of Grower Champagne is a relatively recent phenomenon. Since the 18th century, Champagne houses have dominated the business dynamic in the region. These private houses or negociant
Négociant
A négociant is the French term for a wine merchant who assembles the produce of smaller growers and winemakers and sells the result under its own name....
s would buy grapes from the owners of several vineyards to blend and make Champagne. As of 2003, there were over 3,700 brands of Grower Champagnes available for purchase within France
France
The French Republic , The French Republic , The French Republic , (commonly known as France , is a unitary semi-presidential republic in Western Europe with several overseas territories and islands located on other continents and in the Indian, Pacific, and Atlantic oceans. Metropolitan France...
but only around 130 brands in the United States
United States
The United States of America is a federal constitutional republic comprising fifty states and a federal district...
. As of 2008, these wines accounted for less than 3% of Champagne market, with that market growing as the wines continue to increase in popularity. Distributors and wine retailers tend to tout the comparative value and lower cost of Grower Champagnes versus the wines of larger Champagne houses, due to the larger Champagne houses' costs of mass market advertising. The smaller Growers leave it up to the importer and wine retailer to market their wines.

A common criticism of Grower Champagnes is the potential for variable quality, especially from vintage
Vintage
Vintage, in wine-making, is the process of picking grapes and creating the finished product . A vintage wine is one made from grapes that were all, or primarily, grown and harvested in a single specified year. In certain wines, it can denote quality, as in Port wine, where Port houses make and...
to vintage. While the larger Champagne houses and negociants have the flexibility to buy grapes from all over the Champagne region, Grower Champagne makers are limited to only their vineyard holdings. Conversely, advocates of Grower Champagnes say that the blending of many terroirs by the larger houses makes those wines "underflavored" and non-distinctive.

Today there are over 19,000 independent growers in the Champagne region, accounting for nearly 88% of all vineyard land in the region. Around 5000 of these growers produce wine from their own grapes. The larger Champagne houses have holdings in only 12% of the region's vineyards, making it a necessity for them to buy grapes from independent growers. Under current Appellation d'origine contrôlée
Appellation d'Origine Contrôlée
Appellation d’origine contrôlée , which translates as "controlled designation of origin", is the French certification granted to certain French geographical indications for wines, cheeses, butters, and other agricultural products, all under the auspices of the government bureau Institut National...
(AOC) regulations, there are strict limitations on planting. Some growers are seeing an economic advantage in making wine from their own grapes, especially if they have land in one of Champagne's Grand cru villages, rather than selling them to the larger houses where they become part of a generic blend.