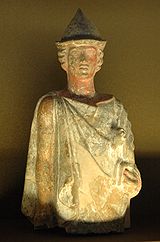 Terracotta figurines are a mode of artistic and religious expression frequently found in Ancient Greece. Cheap and easily produced, these figurines abound and provide an invaluable testimony to the everyday life and religion of the Ancient Greeks. 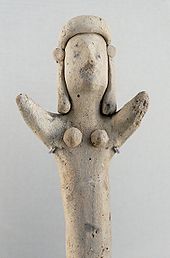 Modelling is the most common and simplest technique. It is also used for the realization of bronzes: the prototypes are made out of raw clay
Clay
Clay is a general term including many combinations of one or more clay minerals with traces of metal oxides and organic matter. Geologic clay deposits are mostly composed of phyllosilicate minerals containing variable amounts of water trapped in the mineral structure.- Formation :Clay minerals...
. The small sizes are directly worked with the hand. For the larger models, the coroplath (or koropláthos, manufacturer of figurines) presses the clay pellets or wads against a wooden restraint. 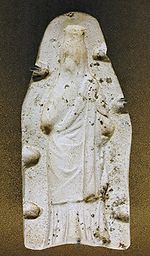 The mould is obtained by application of a bed of clay or plaster on the prototype. Simple moulds, used by the Greeks of the continent until the 4th century BC, are simply dried. Bivalvular moulds, borrowed by the insular Greeks from the Egyptians, require cutting to obtain an obverse and a reverse, with which "keys" are sometimes associated protuberances allowing the two parts to fit better. When the piece becomes complicated, with important projections (arm, legs, head, clothing), the craftsman can cut out the mould in smaller parts. The piece is then dried.

The second phase consists of applying a layer of raw clay inside the mould, which can be incised beforehand in order to obtain effects of relief. The thinness of the layer varies according to the type of object to be realized. The faces of the mould are joined together, the object is then unmoulded, and the craftsman can proceed to the final improvements, typically smoothing the junction. The craftsman also creates a small opening, a vent hole that allows steam to escape during the firing. The vent can also be used for assembly, allowing intervention inside the piece. The limbs are then joined to the body either by pasting them with barbotine (clay mixed with water), or by mortice and tenon joint.

The piece is then fired in the kiln
Kiln
A kiln is a thermally insulated chamber, or oven, in which a controlled temperature regime is produced. Uses include the hardening, burning or drying of materials...
, with the temperature ranging from 600 to 800°C. The kiln used is the same as the potter's. Once the figurine is fired, slip
Slip (ceramics)
A slip is a suspension in water of clay and/or other materials used in the production of ceramic ware. Deflocculant, such as sodium silicate, can be added to the slip to disperse the raw material particles...
can be applied. The slip is sometimes itself fired at low temperature. In the beginning, the range of colors available is rather reduced: red, yellow, black and blue. From the Hellenistic era on, orange, pink mauve, and green are added to that repertoire. The pigments are natural mineral dyes: ochre for yellow and red, coal
Coal
Coal is a combustible black or brownish-black sedimentary rock usually occurring in rock strata in layers or veins called coal beds or coal seams. The harder forms, such as anthracite coal, can be regarded as metamorphic rock because of later exposure to elevated temperature and pressure...
for black, malachite
Malachite
Malachite is a copper carbonate mineral, with the formula Cu2CO32. This green-colored mineral crystallizes in the monoclinic crystal system, and most often forms botryoidal, fibrous, or stalagmitic masses. Individual crystals are rare but do occur as slender to acicular prisms...
for green, etc.

Thanks to their low cost, the figurines make perfect religious offerings. That is indeed their primary purpose, the decorative aspect coming only later. This explains why the Greek temples host abundant quantities of votive or funerary figurines and why there is almost no document written on their subject.

These figurines can present identification issues. Admittedly, the attributes make it possible to recognize a particular god in an unquestionable way, such as the bow for Artemis. Moreover, certain types of statuettes correspond to a precise form of worship related to a specific divinity. Sometimes, however, "visiting gods" complicate matters: these are figurines dedicated to a god who is not of that sanctuary. In addition, the great majority of the figurines simply represent a woman upright, without attribute. These latter figurines are offered in all sanctuaries, independently of the divinity.

The gift of figurines accompanies every moment of life. During pregnancy, future mothers had care to offer a figurine to Ilithyia
Ilithyia
Eileithyia or Ilithyia , was the Cretan goddess adopted into ancient Greek religion and myth as the goddess of childbirth and midwifery.-Etymology and cult:...
, goddess of childbirth: the statuette represents a woman squatting, in full work, according to the Eastern practice. Certain statuettes include a small cavity intended to receive smaller figurines, representative of their babies. During early childhood, one gives figurines of squatting children—a representation of Eastern origin, arrived in Greece via Rhodes
Rhodes
Rhodes is an island in Greece, located in the eastern Aegean Sea. It is the largest of the Dodecanese islands in terms of both land area and population, with a population of 117,007, and also the island group's historical capital. Administratively the island forms a separate municipality within...
and Cyprus
Cyprus
Cyprus , officially the Republic of Cyprus , is a Eurasian island country, member of the European Union, in the Eastern Mediterranean, east of Greece, south of Turkey, west of Syria and north of Egypt. It is the third largest island in the Mediterranean Sea.The earliest known human activity on the...
. The so-called "temple boys" seem to protect the children. Similar representations are also found in tombs. These figurines are of variable size, perhaps to indicate the age of the dead child. Indeed, the habit is to bury the dead accompanied by objects of daily custom: jewels, combs, figurines for the women; weapons and strigil
Strigil
A strigil was a small, curved, metal tool used in ancient Greece and Rome to scrape dirt and sweat from the body before effective soaps became available. First perfumed oil was applied to the skin, and then it would be scraped off, along with the dirt. For wealthier people, this process was often...
s for the men; figurines and toys for the children. Figurines are often voluntarily broken before being placed in the tomb.

The terracotta figurines are often purchased at the entry of the sanctuary. They are the offerings of the common people, who cannot afford to dedicate more valuable objects. They are also used to replace offerings in kind, like animals or food. They were placed on the benches of the temples or close to the cult statue. They were also deposited in places of worship outdoors: Socrates
Socrates
Socrates was a classical Greek Athenian philosopher. Credited as one of the founders of Western philosophy, he is an enigmatic figure known chiefly through the accounts of later classical writers, especially the writings of his students Plato and Xenophon, and the plays of his contemporary ...
recognized a sacred spring on seeing figurines on the ground (Phaedrus
Phaedrus (Plato)
The Phaedrus , written by Plato, is a dialogue between Plato's main protagonist, Socrates, and Phaedrus, an interlocutor in several dialogues. The Phaedrus was presumably composed around 370 BC, around the same time as Plato's Republic and Symposium...
230B). Figurines were dedicated to ask favours from a god as well as to thank him. When the figurines were too numerous in a temple, they were thrown in a "sacred dump". In that case, they are frequently broken to avoid recovery.

From the 4th century BC, the figurines acquire a decorative function. Thus, figurines represent theatrical characters, such as Julius Pollux
Julius Pollux
Julius Pollux was a Greek or Egyptian grammarian and sophist from Alexandria who taught at Athens, where he was appointed professor of rhetoric at the Academy by the emperor Commodus — on account of his melodious voice, according to Philostratus' Lives of the Sophists. Nothing of his...
recounts in his Onomasticon (2nd century CE): the slave, the peasant, the nurse, the fat woman, the satyr from the satyr play
Satyr play
Satyr plays were an ancient Greek form of tragicomedy, similar in spirit to burlesque. They featured choruses of satyrs, were based on Greek mythology, and were rife with mock drunkenness, brazen sexuality , pranks, sight gags, and general merriment.Satyric drama was one of the three varieties of...
, etc. The features are readily caricatured and distorted. By the Hellenistic era, the figurines become grotesques: deformed beings with disproportionate heads, sagging breasts or prominent bellies, hunchbacks and bald men. Grotesques are a specialty of the city of Smyrna
Smyrna
Smyrna was an ancient city located at a central and strategic point on the Aegean coast of Anatolia. Thanks to its advantageous port conditions, its ease of defence and its good inland connections, Smyrna rose to prominence. The ancient city is located at two sites within modern İzmir, Turkey...
, even if produced everywhere in the Greek world, for instance, in Tarsus
Tarsus (city)
Tarsus is a historic city in south-central Turkey, 20 km inland from the Mediterranean Sea. It is part of the Adana-Mersin Metropolitan Area, the fourth-largest metropolitan area in Turkey with a population of 2.75 million...
or Alexandria
Alexandria
Alexandria is the second-largest city of Egypt, with a population of 4.1 million, extending about along the coast of the Mediterranean Sea in the north central part of the country; it is also the largest city lying directly on the Mediterranean coast. It is Egypt's largest seaport, serving...
.

Lastly, the terracotta is often used to manufacture dolls and other children's toys. Thus, we find articulated figurines or small horses, easy to manipulate for small hands. Sometimes, the nature of a figurine is difficult to determine, such as the curious bell-idols from Boeotia, which appear at the end of the 8th century BC. They are equipped with a long neck and a disproportionate body, cylindrical and lathe-shaped. The arms are atrophied and the legs are mobile. Lastly, the head is pierced with a hole to hang them. It is uncertain if they were toys or votive offerings.
The source of this article is wikipedia, the free encyclopedia.  The text of this article is licensed under the GFDL.