Encyclopedia
Greater Finland was an idea which was born in some irredentist
Irredentism
Irredentism is any position advocating annexation of territories administered by another state on the grounds of common ethnicity or prior historical possession, actual or alleged. Some of these movements are also called pan-nationalist movements. It is a feature of identity politics and cultural...
movements emphasizing pan-Finnicism and expressed a Finnish version of pre-World War II
World War II
World War II, or the Second World War , was a global conflict lasting from 1939 to 1945, involving most of the world's nations—including all of the great powers—eventually forming two opposing military alliances: the Allies and the Axis...
European nationalism
Nationalism
Nationalism is a political ideology that involves a strong identification of a group of individuals with a political entity defined in national terms, i.e. a nation. In the 'modernist' image of the nation, it is nationalism that creates national identity. There are various definitions for what...
. It was imagined to include Finland
Finland
Finland , officially the Republic of Finland, is a Nordic country situated in the Fennoscandian region of Northern Europe. It is bordered by Sweden in the west, Norway in the north and Russia in the east, while Estonia lies to its south across the Gulf of Finland.Around 5.4 million people reside...
as well as territories inhabited by ethnically-related Finnic peoples
Finnic peoples
The Finnic or Fennic peoples were historic ethnic groups who spoke various languages traditionally classified as Finno-Permic...
: Finns, Karelians
Karelians
The Karelians are a Baltic-Finnic ethnic group living mostly in the Republic of Karelia and in other north-western parts of the Russian Federation. The historic homeland of Karelians includes also parts of present-day Eastern Finland and the formerly Finnish territory of Ladoga Karelia...
, Estonians
Estonians
Estonians are a Finnic people closely related to the Finns and inhabiting, primarily, the country of Estonia. They speak a Finnic language known as Estonian...
, Ingrians
Ingrians
The term Ingrians may refer to one of the following.*Inhabitants of Ingria in general.*Izhorians, Finnic indigenous people of Ingria.*Ingrian Finns, the descendants of Lutheran emigrants from present-day Finland in the 17th century....
, and Kvens. The Greater Finland idea gained dramatically in popularity and influence in 1917, and lost its ground and support after World War II and the Continuation War
Continuation War
The Continuation War was the second of two wars fought between Finland and the Soviet Union during World War II.At the time of the war, the Finnish side used the name to make clear its perceived relationship to the preceding Winter War...
.

The most coined version of "Greater Finland" was thought to be limited by so-called natural borders encompassing the territories inhabited by Finns and Karelians, ranging from the White Sea
White Sea
The White Sea is a southern inlet of the Barents Sea located on the northwest coast of Russia. It is surrounded by Karelia to the west, the Kola Peninsula to the north, and the Kanin Peninsula to the northeast. The whole of the White Sea is under Russian sovereignty and considered to be part of...
to Lake Onega
Lake Onega
Lake Onega is a lake in the north-west European part of Russia, located on the territory of Republic of Karelia, Leningrad Oblast and Vologda Oblast. It belongs to the basin of Baltic Sea, Atlantic Ocean, and is the second largest lake in Europe after Lake Ladoga...
and along the Svir River
Svir River
Svir is a river in the north-east of Leningrad Oblast, Russia. It flows from Lake Onega west to Lake Ladoga, thus connecting the two largest lakes of Europe. It is the largest river flowing into Lake Ladoga....
and Neva River
Neva River
The Neva is a river in northwestern Russia flowing from Lake Ladoga through the western part of Leningrad Oblast to the Neva Bay of the Gulf of Finland. Despite its modest length , it is the third largest river in Europe in terms of average discharge .The Neva is the only river flowing from Lake...
– or, more modestly, the Sestra River
Sestra River (Leningrad Oblast)
Sestra River is a river in Saint Petersburg and Leningrad Oblast, Russia.The length of the river is 74 km . The area of its basin is 393 km² . The Sestra River flows over the Karelian Isthmus. It used to fall into the Gulf of Finland until the early 18th century...
– to the Gulf of Finland
Gulf of Finland
The Gulf of Finland is the easternmost arm of the Baltic Sea. It extends between Finland and Estonia all the way to Saint Petersburg in Russia, where the river Neva drains into it. Other major cities around the gulf include Helsinki and Tallinn...
. Some proponents also included Ingria
Ingria
Ingria is a historical region in the eastern Baltic, now part of Russia, comprising the southern bank of the river Neva, between the Gulf of Finland, the Narva River, Lake Peipus in the west, and Lake Ladoga and the western bank of the Volkhov river in the east...
, Estonia
Estonia
Estonia , officially the Republic of Estonia , is a state in the Baltic region of Northern Europe. It is bordered to the north by the Gulf of Finland, to the west by the Baltic Sea, to the south by Latvia , and to the east by Lake Peipsi and the Russian Federation . Across the Baltic Sea lies...
, Finnmark
Finnmark
or Finnmárku is a county in the extreme northeast of Norway. By land it borders Troms county to the west, Finland to the south and Russia to the east, and by water, the Norwegian Sea to the northwest, and the Barents Sea to the north and northeast.The county was formerly known as Finmarkens...
, and the Torne Valley
Torne Valley
The Torne Valley or Torne River Valley lies at the border of Sweden and Finland. In 2009 it became one of the Sub-regions of Finland. It is named after the Torne River flowing through the valley and into the Gulf of Bothnia...
.

In some utopian or humorous mind-sets the most extended Greater Finland included the entire area from the Gulf of Bothnia
Gulf of Bothnia
The Gulf of Bothnia is the northernmost arm of the Baltic Sea. It is situated between Finland's west coast and Sweden's east coast. In the south of the gulf lie the Åland Islands, between the Sea of Åland and the Archipelago Sea.-Name:...
to the Ural Mountains
Ural Mountains
The Ural Mountains , or simply the Urals, are a mountain range that runs approximately from north to south through western Russia, from the coast of the Arctic Ocean to the Ural River and northwestern Kazakhstan. Their eastern side is usually considered the natural boundary between Europe and Asia...
and even beyond to the areas of western Siberia
Siberia
Siberia is an extensive region constituting almost all of Northern Asia. Comprising the central and eastern portion of the Russian Federation, it was part of the Soviet Union from its beginning, as its predecessor states, the Tsardom of Russia and the Russian Empire, conquered it during the 16th...
, where some Uralic speakers live also today. 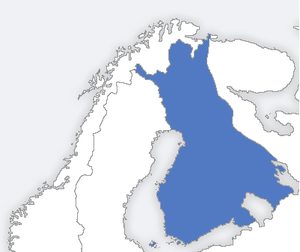 In Finland, interest in the landscape and the culture of Karelia
Karelia
Karelia , the land of the Karelian peoples, is an area in Northern Europe of historical significance for Finland, Russia, and Sweden...
was first expressed in a 19th century cultural phenomenon called Karelianism
Karelianism
Karelianism was a late 19th century cultural phenomenon in the Grand Duchy of Finland and involved writers, painters, poets and sculptors. Since the publishing of the Finnish national epic Kalevala in 1835, compiled from Karelian folk lore, culture spheres in Finland became increasingly curious...
, a form of Finnish national romanticism. Later, some of the ideas included in Karelianism were taken over by proponents of a greater Finland.

Wars in the beginning of the 20th century

After Finland's declaration of independence
Finland's declaration of independence
The Finnish declaration of independence was adopted by the Parliament of Finland on 6 December 1917. It declared Finland an independent and sovereign nation state rather than an autonomous Russian Grand duchy.-Revolution in Russia:...
in 1917, in connection with the October Revolution
October Revolution
The October Revolution , also known as the Great October Socialist Revolution , Red October, the October Uprising or the Bolshevik Revolution, was a political revolution and a part of the Russian Revolution of 1917...
and the Russian Civil War
Russian Civil War
The Russian Civil War was a multi-party war that occurred within the former Russian Empire after the Russian provisional government collapsed to the Soviets, under the domination of the Bolshevik party. Soviet forces first assumed power in Petrograd The Russian Civil War (1917–1923) was a...
, the situation in the Finnic
Finnic peoples
The Finnic or Fennic peoples were historic ethnic groups who spoke various languages traditionally classified as Finno-Permic...
inhabited areas adjacent to Finland's eastern border was considered unstable and exploitable by Nationalist activism
Nationalist activism
The Nationalist activism was an elitist political movement of the early 20th century in Scandinavia, Finland and the Baltic countries. The Activists advocated in brief a close cooperation with Imperial Germany, and active support of Germany's military aims — primarily directed against...
. For example, some Finnish volunteer troops carried out operations across the border into Russian territory. These activities, along with the participation of Finnish volunteer troops in the Estonian Liberation War
Estonian Liberation War
The Estonian War of Independence , also known as the Estonian Liberation War, was a defensive campaign of the Estonian Army and its allies, most notably the White Russian Northwestern Army, Latvia, and the United Kingdom, against the Soviet Western Front offensive and the aggression of the...
(1918-1920) are known in Finland's history as heimosodat
Heimosodat
The term in Finnish historiography heimosodat in English literally "Kindred Nations Wars", "Wars for kindred peoples" or "Kinship Wars" for Finnic kinship. It is often erroneously translated as "Tribal Wars"...
("kindred peoples wars," in the sense of wars related to the Finnic
Finnic peoples
The Finnic or Fennic peoples were historic ethnic groups who spoke various languages traditionally classified as Finno-Permic...
kinship).
The source of this article is wikipedia, the free encyclopedia.  The text of this article is licensed under the GFDL.