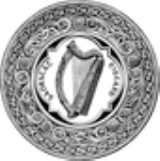 Both sides of the Great Seal feature an image of the harp
Harp
The harp is a multi-stringed instrument which has the plane of its strings positioned perpendicularly to the soundboard. Organologically, it is in the general category of chordophones and has its own sub category . All harps have a neck, resonator and strings...
surrounded by the words "SAORSTÁT ÉIREANN" in Gaelic script
Gaelic script
Gaelic type, sometimes called Irish character, Irish type, or Gaelic script, is a family of insular typefaces devised for printing Irish and used between the 16th and 20th centuries. Sometimes all Gaelic typefaces are called Celtic or uncial, though most Gaelic types are not uncials...
. One side is engraved in silver, the other in copper.

As early as August 1922 civil servants in the Provisional Government
Provisional Government of Southern Ireland
The provisional Government of Southern Ireland was the provisional government for the administration of Southern Ireland between 16 January 1922 and 6 December 1922. The government was effectively a transitional administration for the period between the ratifying of the Anglo-Irish Treaty and the...
sought Ministerial approval to adopt a seal. It was thought a seal was necessary for legal reasons. An approach was made by Hugh Kennedy
Hugh Kennedy
Hugh Kennedy was the only Attorney-General of Southern Ireland and the first Attorney-General of the Irish Free State, and later the first Chief Justice of the Irish Free State. As a member of the Irish Free State Constitution Commission, he was also one of the constitutional architects of the...
, the Attorney General
Attorney General
In most common law jurisdictions, the attorney general, or attorney-general, is the main legal advisor to the government, and in some jurisdictions he or she may also have executive responsibility for law enforcement or responsibility for public prosecutions.The term is used to refer to any person...
to Thomas Sadleir
Thomas Sadleir
Thomas Ulick Sadleir was an Irish genealogist and heraldic expert. He was successively registrar of the Order of St Patrick, Deputy Ulster King of Arms and Acting Ulster King of Arms....
, Registrar of the Office of Arms at Dublin Castle
Dublin Castle
Dublin Castle off Dame Street, Dublin, Ireland, was until 1922 the fortified seat of British rule in Ireland, and is now a major Irish government complex. Most of it dates from the 18th century, though a castle has stood on the site since the days of King John, the first Lord of Ireland...
. In his reply Sadlier noted that he was “satisfied that the harp was very early in the 12th century an Irish badge…” In December 1922, George Sigerson
George Sigerson
George Sigerson was an Irish physician, scientist, writer, politician and poet. He was a leading light in the Irish Literary Revival of the late 19th century in Ireland.-Doctor and Scientist:...
, the President of the National Literary Society, recommended to Tim Healy
Timothy Michael Healy
Timothy Michael Healy, KC , also known as Tim Healy, was an Irish nationalist politician, journalist, author, barrister and one of the most controversial Irish Members of Parliament in the House of Commons of the United Kingdom of Great Britain and Ireland...
, the Governor-General of the Irish Free State
Governor-General of the Irish Free State
The Governor-General was the representative of the King in the 1922–1937 Irish Free State. Until 1927 he was also the agent of the British government in the Irish state. By convention the office of Governor-General was largely ceremonial...
that the harp should be adopted as the symbol of the Free State. His view was that:

On 28 December 1922 a meeting of the Executive Council of the Irish Free State
Executive Council of the Irish Free State
The Executive Council was the cabinet and de facto executive branch of government of the 1922–1937 Irish Free State. Formally, the role of the Executive Council was to "aid and advise" the Governor-General who would exercise the executive authority on behalf of the King...
decided that the Celtic Harp should be adopted. Later, in August 1923 the Executive Council determined that the “Brian Ború Harp
Coat of arms of Ireland
The arms of Ireland is blazoned as Azure a harp Or, stringed Argent . These arms have long been Ireland's heraldic emblem. References to them as being the arms of the king of Ireland can be found as early as the 13th century...
” would be the basis of the new seal. Archibald McGoogan of the Art Department of the National Museum perfected the design. Elements of the Ardagh Chalice
Ardagh Chalice
The Ardagh Hoard, best known for the Ardagh Chalice, is a hoard of metalwork from the 8th and 9th centuries, found in 1868 and now in the National Museum of Ireland in Dublin...
were incorporated into the design of the Great Seal. Final authorisation was given by the Executive Council on 17 October 1924 for the provision of the various seals. These included Ministerial Seals, using the ‘Brian Ború’ Harp and with “Saorstát Éireann” and the Ministerial title arranged around the harp in both Irish and English. The rope pattern was a direct copy of the base of the Ardagh Chalice.

Announcing the changes, the Irish Free State stated that the sealing of international documents with the Great Seal of the Realm had caused confusion in the minds of foreign Governments and that the decision would bring constitutional forms into conformity with the constitutional position now existing.
The source of this article is wikipedia, the free encyclopedia.  The text of this article is licensed under the GFDL.