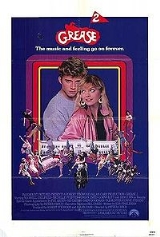 Overview
Grease 2 is a 1982 American musical film
Musical film
The musical film is a film genre in which songs sung by the characters are interwoven into the narrative, sometimes accompanied by dancing. The songs usually advance the plot or develop the film's characters, though in some cases they serve merely as breaks in the storyline, often as elaborate...
and sequel to Grease
Grease (film)
Grease is a 1978 American musical film directed by Randal Kleiser and based on Warren Casey's and Jim Jacobs's 1971 musical of the same name about two lovers in a 1950s high school. The film stars John Travolta, Olivia Newton-John, Stockard Channing, and Jeff Conaway...
, which is based upon the musical
Grease (musical)
Grease is a 1971 musical by Jim Jacobs and Warren Casey. The musical is named for the 1950s United States working-class youth subculture known as the greasers. The musical, set in 1959 at fictional Rydell High School , follows ten working-class teenagers as they navigate the complexities of love,...
of the same name by Jim Jacobs
Jim Jacobs
Jim Jacobs is an American composer, lyricist, and writer for the theatre. He is known for writing the book, lyrics and music, with Warren Casey, for the stage and film musical Grease.-Career:...
and Warren Casey
Warren Casey
Warren Casey was an American theatre composer, lyricist, writer, and actor. He is best known for being the writer and composer, with Jim Jacobs of the stage and film musical Grease.-Career:...
. Grease 2 was produced by Allan Carr
Allan Carr
Allan Carr was an American producer and manager of stage and screen. Carr was nominated for numerous awards, winning a Tony Award and two People's Choice Awards, and was named Producer of the Year by the National Association of Theatre Owners.-Early career:Born Allan Solomon in Chicago, Illinois,...
and Robert Stigwood
Robert Stigwood
Robert Stigwood is an impresario and entertainment entrepreneur who relocated to England in 1954...
, and directed and choreographed by Patricia Birch
Patricia Birch
Patricia Birch is an American choreographer and director for musical theatre and film.Born in Englewood, New Jersey, Birch began her career as a dancer in Broadway musicals, including Brigadoon, Goldilocks, and West Side Story . She has directed and choreographed music videos for Cyndi Lauper, the...
, who also choreographed the first film. It takes place two years after the original film at Rydell High School, with an almost entirely new cast, led by actors Maxwell Caulfield
Maxwell Caulfield
Maxwell Caulfield is a British film, stage, and television actor who is based in the United States, known for his roles as Michael Carrington in Grease 2 and as Miles Colby in The Colbys and its parent show Dynasty . He has more than 70 film, stage and television credits. He starred in Ronald F...
and Michelle Pfeiffer
Michelle Pfeiffer
Michelle Marie Pfeiffer is an American actress. She made her film debut in 1980 in The Hollywood Knights, but first garnered mainstream attention with her performance in Brian De Palma's Scarface . Pfeiffer has won numerous awards for her work...
.
It is 1961, two years after the original Grease gang became seniors and a new academic year is just beginning at Rydell High School (Back to School Again).

[singing] I want a whole lot more than the boy next door. I want hell on wheels.

Louis: [holding a rabbit] See what happens when a boy and a girl don't know how to play it safe!

Grease is still the word!

The music and feeling go on forever.