Encyclopedia
Grande Comore is an island in the Indian Ocean
Indian Ocean
The Indian Ocean is the third largest of the world's oceanic divisions, covering approximately 20% of the water on the Earth's surface. It is bounded on the north by the Indian Subcontinent and Arabian Peninsula ; on the west by eastern Africa; on the east by Indochina, the Sunda Islands, and...
off the coast of Africa
Africa
Africa is the world's second largest and second most populous continent, after Asia. At about 30.2 million km² including adjacent islands, it covers 6% of the Earth's total surface area and 20.4% of the total land area...
. It is the largest island in the Comoros
Comoros
The Comoros , officially the Union of the Comoros is an archipelago island nation in the Indian Ocean, located off the eastern coast of Africa, on the northern end of the Mozambique Channel, between northeastern Mozambique and northwestern Madagascar...
nation. Most of its population is of the Comorian ethnic group. Its population as of 2006 is about 316,600. The island's capital is Moroni
Moroni, Comoros
-References:...
, which is also the national capital. The island is made up of two shield volcano
Shield volcano
A shield volcano is a type of volcano usually built almost entirely of fluid lava flows. They are named for their large size and low profile, resembling a warrior's shield. This is caused by the highly fluid lava they erupt, which travels farther than lava erupted from more explosive volcanoes...
es, with Mount Karthala
Mount Karthala
Karthala is an active volcano and the highest point of the Comoros at above sea level. It is the southernmost and larger of the two shield volcanoes forming Grande Comore island, the largest island in the nation of Comoros. The Karthala volcano is notoriously active, having erupted more than 20...
being the country's highest point at 2361 m (7,746 ft) above sea level. According to the 2009 revision of the constitution of 2002, it is governed by an elected Governor, as are the other islands, with the federal government being much reduced in power. 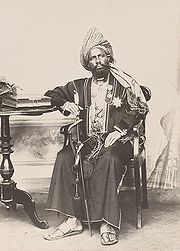 For several centuries, Grande Comore was divided into a number of sultan
Sultan
Sultan is a title with several historical meanings. Originally, it was an Arabic language abstract noun meaning "strength", "authority", "rulership", and "dictatorship", derived from the masdar سلطة , meaning "authority" or "power". Later, it came to be used as the title of certain rulers who...
ates, including Bambao, Itsandra, Mitsamihuli, Mbajini, Hambuu, Washili, Hamahame, Mbwankuu, Mbude and Domba. The sultans were also known as mfaume. In 1886 the ruler of Bambao
Sultanate of Bambao
The Sultanate of Bambao was a state on the island of Grande Comore. Its capital was the town of Iconi. In 1886, Sultan Said Ali bin Said Omar of Bambao united the sultanates of Grand Comore into the state of Ngazidja.-References:*...
, Sultan Said Ali bin Said Omar
Said Ali bin Said Omar of Grande Comore
Said Ali bin Said Omar , was the Sultan or King of Bambao. He unified the eleven sultanates of the island of Grande Comore and became the first and last Sultan tibe or paramount king....
, united the sultanates of Grande Comore into the state of Ngazidja, with the other sultanates maintaining autonomy. That same year, France
France
The French Republic , The French Republic , The French Republic , (commonly known as France , is a unitary semi-presidential republic in Western Europe with several overseas territories and islands located on other continents and in the Indian, Pacific, and Atlantic oceans. Metropolitan France...
established a protectorate over the island. In 1893 Sultan Said Ali was sent into exile on Réunion
Réunion
Réunion is a French island with a population of about 800,000 located in the Indian Ocean, east of Madagascar, about south west of Mauritius, the nearest island.Administratively, Réunion is one of the overseas departments of France...
. In 1908 France annexed the island and the sultanates were abolished. In 1975 Grande Comore Anjouan
Anjouan
Anjouan is an autonomous island, part of the Union of Comoros. The island is located in the Indian Ocean. Its capital is Mutsamudu and its population as of 2006 is about 277,500. The total area of the island is 424 sq. kilometers Anjouan (also known as Ndzuwani or Nzwani) is an autonomous island,...
and Mohéli
Mohéli
Mohéli, also known as Mwali, is one of the three islands which make up the nation of Comoros. Mohéli is located in the Indian Ocean off the coast of Africa. It is by far the smallest of the Comoros islands. Its population, as of 2006, is about 38,000. Its capital city is Fomboni...
declared independence as the nation of Comoros.