Encyclopedia
La Grande Arche de la Défense (la gʁɑ̃d aʁʃ də la defɑ̃s; also La Grande Arche de la Fraternité) is a monument
Monument
A monument is a type of structure either explicitly created to commemorate a person or important event or which has become important to a social group as a part of their remembrance of historic times or cultural heritage, or simply as an example of historic architecture...
and building in the business district of La Défense
La Défense
La Défense is a major business district of the Paris aire urbaine. With a population of 20,000, it is centered in an orbital motorway straddling the Hauts-de-Seine département municipalities of Nanterre, Courbevoie and Puteaux...
and in the commune of Puteaux
Puteaux
Puteaux is a commune in the western suburbs of Paris, France. It is located in the heart of the Hauts-de-Seine department from the center of Paris....
, to the west of Paris
Paris
Paris is the capital and largest city in France, situated on the river Seine, in northern France, at the heart of the Île-de-France region...
, France
France
The French Republic , The French Republic , The French Republic , (commonly known as France , is a unitary semi-presidential republic in Western Europe with several overseas territories and islands located on other continents and in the Indian, Pacific, and Atlantic oceans. Metropolitan France...
. It is usually known as the Arche de la Défense or simply as La Grande Arche. 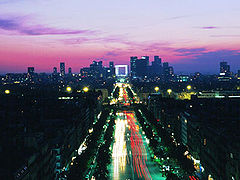 A great national design competition
Architectural design competition
An architectural design competition is a special type of competition in which an organization or government body that plans to build a new building asks for architects to submit a proposed design for a building. The winning design is usually chosen by an independent panel of design professionals...
was launched in 1982 as the initiative of French president François Mitterrand
François Mitterrand
François Maurice Adrien Marie Mitterrand was the 21st President of the French Republic and ex officio Co-Prince of Andorra, serving from 1981 until 1995. He is the longest-serving President of France and, as leader of the Socialist Party, the only figure from the left so far elected President...
. Danish
Denmark
Denmark is a Scandinavian country in Northern Europe. The countries of Denmark and Greenland, as well as the Faroe Islands, constitute the Kingdom of Denmark . It is the southernmost of the Nordic countries, southwest of Sweden and south of Norway, and bordered to the south by Germany. Denmark...
architect Johann Otto von Spreckelsen
Johann Otto von Spreckelsen
Johann Otto von Spreckelsen was a Danish architect.He was born in Viborg and studied at the Viborg Katedralskole and Royal Academy of Arts in Copenhagen, and later served as director up to his death....
(1929–1987) and Danish engineer Erik Reitzel
Erik Reitzel
Erik Reitzel was for many years a professor at the Royal Danish Academy of Fine Arts and at the Technical University of Denmark, in the disciplines of bearing structures and structural design....
designed the winning entry to be a 20th-century version of the Arc de Triomphe
Arc de Triomphe
-The design:The astylar design is by Jean Chalgrin , in the Neoclassical version of ancient Roman architecture . Major academic sculptors of France are represented in the sculpture of the Arc de Triomphe: Jean-Pierre Cortot; François Rude; Antoine Étex; James Pradier and Philippe Joseph Henri Lemaire...
: a monument to humanity and humanitarian ideals rather than military victories. The construction of the monument began in 1985. Spreckelsen resigned on July 1986 and ratified the transfer of all his architectural responsibilities to his associate, French architect Paul Andreu
Paul Andreu
Paul Andreu is a renowned French architect. He is best known for having planned numerous airports worldwide, notably Ninoy Aquino International Airport , Soekarno-Hatta International Airport , Shanghai Pudong International Airport Abu Dhabi International Airport, Dubai International Airport,...
. Reitzel continued his work until the monument was completed in 1989.

The Arche is in the approximate shape of a cube (width: 108m, height: 110m, depth: 112m); it has been suggested that the structure looks like a hypercube
Hypercube
In geometry, a hypercube is an n-dimensional analogue of a square and a cube . It is a closed, compact, convex figure whose 1-skeleton consists of groups of opposite parallel line segments aligned in each of the space's dimensions, perpendicular to each other and of the same length.An...
(a tesseract
Tesseract
In geometry, the tesseract, also called an 8-cell or regular octachoron or cubic prism, is the four-dimensional analog of the cube. The tesseract is to the cube as the cube is to the square. Just as the surface of the cube consists of 6 square faces, the hypersurface of the tesseract consists of 8...
) projected onto the three-dimensional world. It has a prestressed concrete
Prestressed concrete
Prestressed concrete is a method for overcoming concrete's natural weakness in tension. It can be used to produce beams, floors or bridges with a longer span than is practical with ordinary reinforced concrete...
frame covered with glass
Glass
Glass is an amorphous solid material. Glasses are typically brittle and optically transparent.The most familiar type of glass, used for centuries in windows and drinking vessels, is soda-lime glass, composed of about 75% silica plus Na2O, CaO, and several minor additives...
and Carrara
Carrara
Carrara is a city and comune in the province of Massa-Carrara , notable for the white or blue-grey marble quarried there. It is on the Carrione River, some west-northwest of Florence....
marble
Marble
Marble is a metamorphic rock composed of recrystallized carbonate minerals, most commonly calcite or dolomite.Geologists use the term "marble" to refer to metamorphosed limestone; however stonemasons use the term more broadly to encompass unmetamorphosed limestone.Marble is commonly used for...
from Italy
Italy
Italy , officially the Italian Republic languages]] under the European Charter for Regional or Minority Languages. In each of these, Italy's official name is as follows:;;;;;;;;), is a unitary parliamentary republic in South-Central Europe. To the north it borders France, Switzerland, Austria and...
and was built by the French
France
The French Republic , The French Republic , The French Republic , (commonly known as France , is a unitary semi-presidential republic in Western Europe with several overseas territories and islands located on other continents and in the Indian, Pacific, and Atlantic oceans. Metropolitan France...
civil engineering company Bouygues
Bouygues
Bouygues S.A. is a French industrial group headquartered in the 8th arrondissement of Paris, France. Bouygues is listed on Euronext Paris exchange and is a blue chip in the CAC 40 stock market index. The company was founded in 1952 by Francis Bouygues and since 1989 has been led by his son Martin...
.
La Grande Arche was inaugurated in July 1989, with grand military parades that marked the bicentennial of the French revolution
French Revolution
The French Revolution , sometimes distinguished as the 'Great French Revolution' , was a period of radical social and political upheaval in France and Europe. The absolute monarchy that had ruled France for centuries collapsed in three years...
. It completed the line of monuments that forms the Axe historique
Axe historique
The Axe historique is a line of monuments, buildings and thoroughfares that extends from the centre of Paris, France, to the west. It is also known as the "Voie Triomphale" ....
running through Paris. The Arche is turned at an angle of 6.33° on this axis. The most important reason for this turn was technical: With a métro
Paris Métro
The Paris Métro or Métropolitain is the rapid transit metro system in Paris, France. It has become a symbol of the city, noted for its density within the city limits and its uniform architecture influenced by Art Nouveau. The network's sixteen lines are mostly underground and run to 214 km ...
station, an RER
RER
The RER is a rapid transit system in France serving Paris and its suburbs. The RER is an integration of a modern city-centre underground rail and a pre-existing set of commuter rail lines. It has several connections with the Paris Métro within the city of Paris. Within the city, the RER...
station, and a motorway all situated directly underneath the Arche, the angle was the only way to accommodate the structure's giant foundations. From an architectural point of view, the turn emphasizes the depth of the monument, and is similar to the turn of the Louvre
Louvre
The Musée du Louvre – in English, the Louvre Museum or simply the Louvre – is one of the world's largest museums, the most visited art museum in the world and a historic monument. A central landmark of Paris, it is located on the Right Bank of the Seine in the 1st arrondissement...
at the other end of the Axe historique.
In addition, the Arche is placed so that it forms a secondary axe (axis) with the two highest buildings in Paris, the Tour Eiffel
Eiffel Tower
The Eiffel Tower is a puddle iron lattice tower located on the Champ de Mars in Paris. Built in 1889, it has become both a global icon of France and one of the most recognizable structures in the world...
and the Tour Montparnasse
Tour Montparnasse
Tour Maine-Montparnasse , also commonly named Tour Montparnasse, is a tall office skyscraper located in Paris, France, in the area of Montparnasse. Constructed from 1969 to 1972, it was the tallest skyscraper in France until 2011, when it was surpassed in height by the Tour First...
.

The two sides of the Arche house government offices. The roof section is an exhibition centre. The vertical structure visible in the photograph is the lift scaffolding
Scaffolding
Scaffolding is a temporary structure used to support people and material in the construction or repair of buildings and other large structures. It is usually a modular system of metal pipes or tubes, although it can be from other materials...
. Views of Paris
Paris
Paris is the capital and largest city in France, situated on the river Seine, in northern France, at the heart of the Île-de-France region...
are to be had from the lifts taking visitors to the roof. (After a non-injury accident in the elevators in April 2010, the Department of Ecology, owner of the roof of the Grande Arche, has decided to permanently close the computer museum, restaurant, and viewing deck. Access to the roof is still possible via the elevators in the north and south walls, but they are closed to the public.)