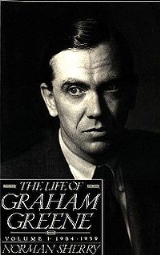 Overview
Henry Graham Greene, OM
Order of Merit
The Order of Merit is a British dynastic order recognising distinguished service in the armed forces, science, art, literature, or for the promotion of culture...
, CH
Order of the Companions of Honour
The Order of the Companions of Honour is an order of the Commonwealth realms. It was founded by King George V in June 1917, as a reward for outstanding achievements in the arts, literature, music, science, politics, industry or religion....
(2 October 1904 – 3 April 1991) was an English
English people
The English are a nation and ethnic group native to England, who speak English. The English identity is of early mediaeval origin, when they were known in Old English as the Anglecynn. England is now a country of the United Kingdom, and the majority of English people in England are British Citizens...
author
Author
An author is broadly defined as "the person who originates or gives existence to anything" and that authorship determines responsibility for what is created. Narrowly defined, an author is the originator of any written work.-Legal significance:...
, playwright
Playwright
A playwright, also called a dramatist, is a person who writes plays.The term is not a variant spelling of "playwrite", but something quite distinct: the word wright is an archaic English term for a craftsman or builder...
and literary critic. His works explore the ambivalent moral and political issues of the modern world. Greene was notable for his ability to combine serious literary acclaim with widespread popularity.

Have you seen a room from which faith has gone?...Like a marriage from which love has gone...And patience, patience everywhere like a fog.

The economy of a novelist is a little like that of a careful housewife who is unwilling to throw away anything that might perhaps serve its turn. Perhaps the comparison is closer to the Chinese cook who leaves hardly any part of a duck unserved.

It is the story-teller's task to elicit sympathy and a measure of understanding for those who lie outside the boundaries of State approval.

Speech on receiving the Shakespeare Prize awarded by the University of Hamburg, Germany (1969)

Morality comes with the sad wisdom of age, when the sense of curiosity has withered.

My two fingers on a typewriter have never connected with my brain. My hand on a pen does. A fountain pen, of course. Ball-point pens are only good for filling out forms on a plane.

The world is not black and white. More like black and grey.

That instinct for human character that is perhaps inherent in an imaginative writer.

A major character has to come somehow out of the unconscious.

The moment comes when a character does or says something you hadn't thought about. At that moment he's alive and you leave it to him.