The Governor serves a four year term which begins on the second day of January after the year of his election and ends on the date his successor takes office. Consecutive service is unlimited, according to the Constitution of the Island. As an example Luis Muñoz Marín, its first elected governor, served for four consecutive terms from 1949 to 1965; the Constitution of the Commonwealth was ratified by the people of Puerto Rico in 1952.

The Governor is elected by a direct vote from the people. The Constitution states that if the margin of victory of a candidate is less than .5% of the votes a full recount of the election must take place. So far, only in the elections of 1980 and 2004 has a recount taken place.


Powers of the governor 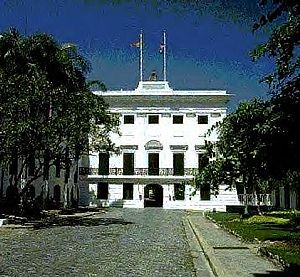 Quincentenary Commission of the Governorship of Puerto Rico

On April 13, 2010, Governor Luis Fortuño
Luis Fortuño
Luis Guillermo Fortuño Burset is the governor of the Commonwealth of Puerto Rico, a territory of the United States of America. Fortuño is also the president of the New Progressive Party of Puerto Rico , a member of the Republican National Committee, and will be president of the Council of State...
and Secretary of State Kenneth McClintock
Kenneth McClintock
Kenneth D. McClintock-Hernández is the current Secretary of State of Puerto Rico. Mr. McClintock served as co-chair of Hillary Clinton presidential campaign's National Hispanic Leadership Council in 2008, co-chaired Clinton's successful Puerto Rico primary campaign that year and served as the...
signed an Executive Order providing for the celebration of the 500th Anniversary of the Governorship of Puerto Rico, recognizing that although it appears that Juan Ponce de León
Juan Ponce de León
Juan Ponce de León was a Spanish explorer. He became the first Governor of Puerto Rico by appointment of the Spanish crown. He led the first European expedition to Florida, which he named...
was appointed in 1508, the first references to him as Governor "of the island of San Juan" (as Puerto Rico was then named) do not appear under King Ferdinand's signature until 1510, according to Puerto Rico's Official Historian, doctor Luis González-Vale. Fortuño appointed Dr. González-Vale to chair the newly-created Quincentenary Commission of the Governorship of Puerto Rico. Members include, among others, Secretary McClintock, Sacred Heart University President José Jaime Rivera, Interamerican University of Puerto Rico President Manuel Fernós, San Juan Mayor Jorge Santini
Jorge Santini
Jorge Santini Padilla in San Juan, Puerto Rico) is an Puerto Rican Politician and current Mayor of San Juan City.-Biography:...
, Guaynabo Mayor Hector O'Neill and Institute of Puerto Rican Culture (IPC) Executive Director Mercedes Gómez. The Governor also appointed an advisory board which includes legendary former IPC Executive Director and anthropologist, don Ricardo Alegría
Ricardo Alegría
Ricardo Alegría was a Puerto Rican scholar, cultural anthropologist and archeologist known as the "Father of Modern Puerto Rican Archaeology".-Early years:...
.

Governor Fortuño held a ceremony on October 12, 2010 at Plaza San José in Old San Juan inaugurating the 13-month official celebration of the Quincentenary, and a commemorative event at Ponce De León's birthplace, Santervas del Campo, Spain in January, 2011. An academic congress on the early centuries of the institution of the governorship was held in San Juan, Ponce and San Germán
San Germán, Puerto Rico
San Germán is a municipality located in the southwestern region of Puerto Rico, south of Mayagüez and Maricao; north of Lajas; east of Hormigueros and Cabo Rojo; and west of Sabana Grande. San Germán is spread over 18 wards and San Germán Pueblo...
in the spring of 2011.