Encyclopedia
Gornje Podunavlje Special Nature Reserve is a large protected area of wetland
Wetland
A wetland is an area of land whose soil is saturated with water either permanently or seasonally. Wetlands are categorised by their characteristic vegetation, which is adapted to these unique soil conditions....
in the northwest of Serbia
Serbia
Serbia , officially the Republic of Serbia , is a landlocked country located at the crossroads of Central and Southeast Europe, covering the southern part of the Carpathian basin and the central part of the Balkans...
(Vojvodina
Vojvodina
Vojvodina, officially called Autonomous Province of Vojvodina is an autonomous province of Serbia. Its capital and largest city is Novi Sad...
province). It comprises two big marshes along the left bank of the Danube
Danube
The Danube is a river in the Central Europe and the Europe's second longest river after the Volga. It is classified as an international waterway....
River - the Monostor and Apatin
Apatin
Apatin is a town and municipality in the Vojvodina administrative region of Serbia, located in the West Bačka District, at . The town of Apatin is the administrative, economic, cultural, educational and tourist centre of the municipality of Apatin...
marsh, including 66 km (41 mi) of the Danube course (1366 – 1433 km).

The first designation as a protected area dates back to 1955, when an area of 10 square kilometres (3.9 sq mi) was proposed as an important habitat for the White-tailed Eagle
White-tailed Eagle
The White-tailed Eagle , also known as the Sea Eagle, Erne , or White-tailed Sea-eagle, is a large bird of prey in the family Accipitridae which includes other raptors such as hawks, kites, and harriers...
and the Black Stork
Black Stork
The Black Stork Ciconia nigra is a large wading bird in the stork family Ciconiidae. It is a widespread, but rare, species that breeds in the warmer parts of Europe, predominantly in central and eastern regions. This is a shy and wary species, unlike the closely related White Stork. It is seen in...
. Since then, the area included and the level of protection has been gradually increased. Gornje Podunavlje was designated as a Special Nature Reserve in 2001, with a total size of 19,648 ha
Hectare
The hectare is a metric unit of area defined as 10,000 square metres , and primarily used in the measurement of land. In 1795, when the metric system was introduced, the are was defined as being 100 square metres and the hectare was thus 100 ares or 1/100 km2...
(48,551 acres).

Within the reserve, there is a three-level zonation system established: protection regimes of category I (1.3 %), II (24.7 %) and III (74.0 %). There is a huge biodiversity of Gornje Podunavlje Reserve. More than 150 bird species occur regularly in the reserve, amongst which a lot of threatened ones. It is an area of important aquatic and semi-aquatic vegetation, wet meadows and native lowland forests composed of willow
Willow
Willows, sallows, and osiers form the genus Salix, around 400 species of deciduous trees and shrubs, found primarily on moist soils in cold and temperate regions of the Northern Hemisphere...
, poplar
Poplar
Populus is a genus of 25–35 species of deciduous flowering plants in the family Salicaceae, native to most of the Northern Hemisphere. English names variously applied to different species include poplar , aspen, and cottonwood....
, ash
Ash tree
Fraxinus is a genus flowering plants in the olive and lilac family, Oleaceae. It contains 45-65 species of usually medium to large trees, mostly deciduous though a few subtropical species are evergreen. The tree's common English name, ash, goes back to the Old English æsc, while the generic name...
and oak
Oak
An oak is a tree or shrub in the genus Quercus , of which about 600 species exist. "Oak" may also appear in the names of species in related genera, notably Lithocarpus...
trees. The area is rich in fish species, as one of the most important spawning areas along the Danube River.

Gornje Podunavlje is also an important trans-boundary area, creating a vast Central Danube Floodplains, the large trans-boundary floodplain in the middle Danube, along the route of the southern European Green Belt
European Green Belt
The European Green Belt initiative is a grass-roots movement for nature conservation and sustainable development in the area of the former Iron Curtain. The term refers to both an environmental initiative as well as the area it concerns. The initiative is carried out under the patronage of the IUCN...
. It is one of the best preserved wetlands in the Danube River Basin area. A natural complex of more than 700 square kilometres (270.3 sq mi) embraces three protected areas: the Kopački rit
Kopacki Rit
Kopački Rit , is a nature park in eastern Croatia. It is located northwest of the confluence of the Drava and the Danube, situated at the border with Serbia. It comprises many backwaters and ponds along the Danube...
Nature Park in Croatia
Croatia
Croatia , officially the Republic of Croatia , is a unitary democratic parliamentary republic in Europe at the crossroads of the Mitteleuropa, the Balkans, and the Mediterranean. Its capital and largest city is Zagreb. The country is divided into 20 counties and the city of Zagreb. Croatia covers ...
, the Danube-Drava National Park in Hungary
Hungary
Hungary , officially the Republic of Hungary , is a landlocked country in Central Europe. It is situated in the Carpathian Basin and is bordered by Slovakia to the north, Ukraine and Romania to the east, Serbia and Croatia to the south, Slovenia to the southwest and Austria to the west. The...
and the Gornje Podunavlje Special Nature Reserve in Serbia. 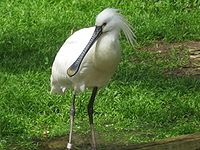 As one of the last integral floodplains of the Danube, it contains some of the most valuable wetland habitats and therefore is a sanctuary for many species, which with their lifecycles, is inherently connected to the river. Natural poplar, oak and willow forests and occasionally flooded wet meadows or numerous oxbow lake
Oxbow lake
An oxbow lake is a U-shaped body of water formed when a wide meander from the main stem of a river is cut off to create a lake. This landform is called an oxbow lake for the distinctive curved shape, named after part of a yoke for oxen. In Australia, an oxbow lake is called a billabong, derived...
s and swamps, which were once widespread in the Danube wetlands, are today rare and fragmented habitats.

The area is home to some important species such as White-tailed Eagle
White-tailed Eagle
The White-tailed Eagle , also known as the Sea Eagle, Erne , or White-tailed Sea-eagle, is a large bird of prey in the family Accipitridae which includes other raptors such as hawks, kites, and harriers...
(Haliaeetus albicilla) or Black Stork
Black Stork
The Black Stork Ciconia nigra is a large wading bird in the stork family Ciconiidae. It is a widespread, but rare, species that breeds in the warmer parts of Europe, predominantly in central and eastern regions. This is a shy and wary species, unlike the closely related White Stork. It is seen in...
(Ciconia nigra), numerous fish species which find ideal spawning conditions in the oxbows and shallow shoals of the emanated river or rare and endangered mammals like European Otter
European Otter
The European Otter , also known as the Eurasian otter, Eurasian river otter, common otter and Old World otter, is a European and Asian member of the Lutrinae or otter subfamily, and is typical of freshwater otters....
(Lutra lutra) and Wild Cat
Wild cat
The wildcat is a small cat with several subspecies and a very broad distribution, found throughout most of Africa, Europe, and southwest and central Asia into India, China, and Mongolia. It is a hunter of small mammals, birds, and other creatures of a similar or smaller size. Sometimes included is...
(Felis silvestris). Although suffers a certain pressure from numerous human activities, this area still remains an unspoilt natural environment for the many species which inhabit it.