Encyclopedia
The Goodyear Airdock is an airship
Airship
An airship or dirigible is a type of aerostat or "lighter-than-air aircraft" that can be steered and propelled through the air using rudders and propellers or other thrust mechanisms...
storage and construction hangar
Hangar
A hangar is a closed structure to hold aircraft or spacecraft in protective storage. Most hangars are built of metal, but other materials such as wood and concrete are also sometimes used...
in Akron, Ohio
Akron, Ohio
Akron , is the fifth largest city in the U.S. state of Ohio and the county seat of Summit County. It is located in the Great Lakes region approximately south of Lake Erie along the Little Cuyahoga River. As of the 2010 census, the city had a population of 199,110. The Akron Metropolitan...
.

Built and previously owned by the Goodyear-Zeppelin Corporation, later Goodyear Aerospace
Goodyear Aerospace
Goodyear Aerospace Corporation was the aerospace and defense subsidiary of Goodyear.-Early Years:The company began as Goodyear Tire & Rubber Co.’s Aeronautics Department and renamed in 1917 as the Goodyear Zeppelin Corporation set up to construct dirigibles for the US military...
, it was constructed from April 20, 1929 to November 25, 1929, at a cost of $2.2 million (26.4 million 2007 US Dollars adjusted for inflation). The building was designed by Karl Arnstein
Karl Arnstein
Karl Arnstein was one of the most important 20th century airship engineers and designers in Germany and the United States of America. He was born in Prague, Bohemia to Jewish parents. He developed stress analysis methods that have been incorporated into airships and airplane materials...
of the Wilbur Watson Engineering Company of Cleveland, Ohio
Cleveland, Ohio
Cleveland is a city in the U.S. state of Ohio and is the county seat of Cuyahoga County, the most populous county in the state. The city is located in northeastern Ohio on the southern shore of Lake Erie, approximately west of the Pennsylvania border...
. At the time it was built, it was the largest building in the world without interior supports, and provided a huge structure in which "lighter-than-air" ships (later known as airship
Airship
An airship or dirigible is a type of aerostat or "lighter-than-air aircraft" that can be steered and propelled through the air using rudders and propellers or other thrust mechanisms...
s, dirigibles, and blimps) could be constructed.
The first two airships to be constructed and launched at the Airdock were USS Akron (ZRS-4)
USS Akron (ZRS-4)
USS Akron was a helium-filled rigid airship of the United States Navy that was lost in a weather-related accident off the New Jersey coast early on April 4, 1933, killing 73 of the 76 crew and passengers on board...
and its sister ship, USS Macon (ZRS-5)
USS Macon (ZRS-5)
USS Macon was a rigid airship built and operated by the United States Navy for scouting. She served as a "flying aircraft carrier", launching Curtiss F9C Sparrowhawk biplane fighters. In service for less than two years, in 1935 Macon was damaged in a storm and lost off California's Big Sur coast,...
, built in 1931 and 1933, respectively. These first two airships were approximately 785 feet (239.27 m) in length.

The building has a unique shape which has been described as "half a silkworm's cocoon, cut in half the long way." It is 1,175 feet (358.14 m) long, 325 feet (99.06 m) wide, and 211 feet (64.31 m) high, supported by 13 steel arches. There is 364,000 square feet (34 000 m²) of unobstructed floor space, or an area larger than 8 football fields side-by-side. The Airdock has a volume of 55 million cubic feet (or about 1.5 million cubic meters). At the northeast end of the building a control tower and radio aerial are on top of the airdock. At each end of the building are two huge semi-spherical doors that each weigh 600 tons (544 000 kg). At the top, the doors are fastened by hollow forged pins 17 inches (43 cm) in diameter and six feet (1.83 m) long. The doors roll on forty wheels on specially-designed curved railroad tracks, powered by an individual power plant each, which can open the doors in about 5 minutes.

The Airdock is so large that temperature changes within the structure could be very different from that on the outside of the structure. To accommodate these fluctuations which could potentially cause structural damage, a row of 12 windows 100 feet (30.48 m) off the ground were installed. Furthermore, the entire structure is mounted on rollers to compensate for expansion or contraction resulting from temperature changes. Rumors (dating back to 1930) state that it actually rains inside the structure. When the humidity
Humidity
Humidity is a term for the amount of water vapor in the air, and can refer to any one of several measurements of humidity. Formally, humid air is not "moist air" but a mixture of water vapor and other constituents of air, and humidity is defined in terms of the water content of this mixture,...
is high in the Airdock, a sudden change in temperature causes condensation
Condensation
Condensation is the change of the physical state of matter from gaseous phase into liquid phase, and is the reverse of vaporization. When the transition happens from the gaseous phase into the solid phase directly, the change is called deposition....
. This condensation falls in a mist, creating the illusion of rain, according to the designer.

When World War II
World War II
World War II, or the Second World War , was a global conflict lasting from 1939 to 1945, involving most of the world's nations—including all of the great powers—eventually forming two opposing military alliances: the Allies and the Axis...
broke out, enclosed production areas were desperately needed, and the Airdock was used for building airships. The last airship built in the Airdock was the U.S. Navy's ZPG-3W, built in 1960. The building later housed the photographic division of the Goodyear Aerospace Corporation. 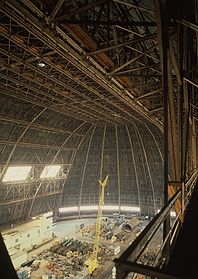 The Airdock has more recently served as the site of the 1986 kickoff rally for the United Way of Summit County
Summit County, Ohio
Summit County is an urban county located in the state of Ohio, United States. As of the 2000 census, the population was 542,899. In the 2010 Census the population was 541,781. Its county seat is Akron...
, where 200,000 members of the public visited. Bill Clinton
Bill Clinton
William Jefferson "Bill" Clinton is an American politician who served as the 42nd President of the United States from 1993 to 2001. Inaugurated at age 46, he was the third-youngest president. He took office at the end of the Cold War, and was the first president of the baby boomer generation...
spoke during his 1992 election campaign
United States presidential election, 1992
The United States presidential election of 1992 had three major candidates: Incumbent Republican President George Bush; Democratic Arkansas Governor Bill Clinton, and independent Texas businessman Ross Perot....
, bringing some 30,000 visitors to the site.

In 1987, the Loral Corporation
Loral Corporation
Loral Corporation was a defense contractor founded in 1948 in New York by William Lorenz and Leon Alpert as Loral Electronics Corporation. The company's name was taken from the first letters of each founder's surname....
purchased Goodyear Aerospace and the Goodyear Airdock as a result of James Goldsmith
James Goldsmith
Sir James Michael "Jimmy" Goldsmith was an Anglo-French billionaire financier and tycoon. Towards the end of his life, he became a magazine publisher and a politician. In 1994, he was elected to represent France as a Member of the European Parliament and he subsequently founded the short-lived...
's greenmail
Greenmail
Greenmail or greenmailing is the practice of purchasing enough shares in a firm to threaten a takeover and thereby forcing the target firm to buy those shares back at a premium in order to suspend the takeover....
ing of Goodyear. The Loral Corporation (and its holdings, such as the Goodyear Airdock) was purchased by Lockheed Martin
Lockheed Martin
Lockheed Martin is an American global aerospace, defense, security, and advanced technology company with worldwide interests. It was formed by the merger of Lockheed Corporation with Martin Marietta in March 1995. It is headquartered in Bethesda, Maryland, in the Washington Metropolitan Area....
in 1996. The Airdock is not open to the public, but it can be seen by those traveling on U.S. Route 224
U.S. Route 224
U.S. Route 224 is a spur of U.S. Route 24. It currently runs for 289 miles from New Castle, Pennsylvania at Pennsylvania Route 18 to Huntington, Indiana at U.S. Route 24. It passes through the states of Pennsylvania, Ohio and Indiana...
east of downtown Akron.

In more recent years, the airdock has been used for the construction of military blimps by Lockheed Martin. It has also been the subject of a number of conspiracy theories in recent years, since it is usually lit up every night, and its doors open and close at random times and are next to a rarely used runway that is well maintained for the little use it receives publicly.