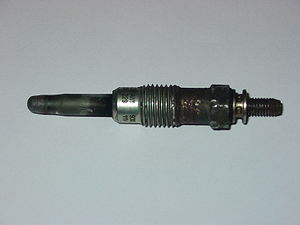 A glowplug is a heating device used to aid starting diesel engine
Diesel engine
A diesel engine is an internal combustion engine that uses the heat of compression to initiate ignition to burn the fuel, which is injected into the combustion chamber...
s. 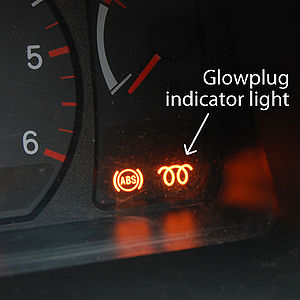 In an older generation diesel-engine vehicles, unlike in a gasoline-engine vehicle, the operator did not simply turn the key to the "start" position and have the engine immediately start. Instead, the operator turned the key to the "on" position for a long duration; the glowplug relay switches the glowplugs on, and a light (see picture at right) on the instrument cluster illuminates. This process is called "pre-heating" or "glowing".

If the car had been running very recently, or if the ambient temperature was hot, the "wait to start" light might not come on; in this case, the operator may proceed to turn the key to the "start" position and start the engine without having to wait.

A glow plug is a pencil-shaped piece of metal with a heating element
Heating element
A heating element converts electricity into heat through the process of Joule heating. Electric current through the element encounters resistance, resulting in heating of the element....
at the tip; that heating element, when electrified, heats due to its electrical resistance
Electrical resistance
The electrical resistance of an electrical element is the opposition to the passage of an electric current through that element; the inverse quantity is electrical conductance, the ease at which an electric current passes. Electrical resistance shares some conceptual parallels with the mechanical...
and begins to emit light in the visible spectrum, hence the term "glow" plug; the effect is very similar to that of a toaster
Toaster
The toaster is typically a small electric kitchen appliance designed to toast multiple types of bread products. A typical modern two-slice toaster draws anywhere between 600 and 1200 W and makes toast in 1 to 3 minutes...
. The heat generated by the glowplugs is directed into the cylinders, and serves to warm the engine block immediately surrounding the cylinders. This aids in reducing the amount of thermal diffusion
Heat transfer
Heat transfer is a discipline of thermal engineering that concerns the exchange of thermal energy from one physical system to another. Heat transfer is classified into various mechanisms, such as heat conduction, convection, thermal radiation, and phase-change transfer...
which will occur when the engine attempts to start.

When internal sensors detect that the core of the engine block has reached a certain designated temperature, or when a certain amount of time elapses, the glowplug relay switches off the "wait-to-start" light. A pre-heating cycle usually lasts for 2 to 5 seconds. The operator then proceeds to turn the key to the "start" position, as in a gasoline engine. The glowplug relay switches off the glowplugs after the engine is running (or, in older cars, at the same time the "wait to start" light goes out). In some newer cars, glow plugs continue to operate for up to 180 seconds after engine start to keep the engine within emissions regulations, as combustion efficiency is greatly reduced when the engine is very cold.

A glowplug resembles a short metal pencil
Pencil
A pencil is a writing implement or art medium usually constructed of a narrow, solid pigment core inside a protective casing. The case prevents the core from breaking, and also from marking the user’s hand during use....
. The heating filament is fitted into its tip. Glowplug filaments must be made of certain materials, such as platinum
Platinum
Platinum is a chemical element with the chemical symbol Pt and an atomic number of 78. Its name is derived from the Spanish term platina del Pinto, which is literally translated into "little silver of the Pinto River." It is a dense, malleable, ductile, precious, gray-white transition metal...
and iridium
Iridium
Iridium is the chemical element with atomic number 77, and is represented by the symbol Ir. A very hard, brittle, silvery-white transition metal of the platinum family, iridium is the second-densest element and is the most corrosion-resistant metal, even at temperatures as high as 2000 °C...
, that are resistant to both oxidation and high levels of heat.
The source of this article is wikipedia, the free encyclopedia.  The text of this article is licensed under the GFDL.