Encyclopedia
Glorietta is a large shopping mall in the Ayala Center
Ayala Center
The Ayala Center is a commercial complex operated by Ayala Land Incorporated located in the central business district of Makati in Metro Manila, Philippines.-About the Center:...
in Makati City
Makati City
The City of Makati is one of the 17 cities that make up Metro Manila, one of the most populous metropolitan areas in the world. Makati is the financial center of the Philippines and one of the major financial, commercial and economic hubs in Asia...
, Metro Manila
Metro Manila
Metropolitan Manila , the National Capital Region , or simply Metro Manila, is the metropolitan region encompassing the City of Manila and its surrounding areas in the Philippines...
, Philippines
Philippines
The Philippines , officially known as the Republic of the Philippines , is a country in Southeast Asia in the western Pacific Ocean. To its north across the Luzon Strait lies Taiwan. West across the South China Sea sits Vietnam...
. The mall is owned by the Zobel de Ayala family
Zobel de Ayala family
The Zóbel de Ayala clan is a Filipino business family of German-Spanish ancestry. Since the 19th century, they have created the Ayala Corporation, a holding company for a combination of businesses related to the heart of Philippines business, industry and finance.-History:The Ayala ancestors were...
and its holding company, Ayala Corporation
Ayala Corporation
Ayala Corporation is a holding company for the diversified interests of the Ayala Group. Founded in the Philippines by the Spanish and German Ayala, Roxas, and Zobel families during colonial rule, it is the country's oldest and largest conglomerate...
. The mall is divided into five sections (named Glorietta 1–5) and contains many shops and restaurants, as well as cinema screens, a gym, arcades and a large central atrium often used to stage special events. It has an activity center, located at the heart of the mall. It is also integrated between Greenbelt Mall, SM Makati, Rustan's Makati and The Landmark, a department store. Ayala Center has constructed Glorietta 5, which is located in front of Hotel Intercontinental Manila and beside Rustans Department Store, as part of the Ayala Land's plan of redeveloping Glorietta. The tenants affected by the October 19, 2007 explosion
2007 Glorietta explosion
The 2007 Glorietta explosion occurred in the Glorietta 2 section of the Glorietta shopping complex at Ayala Center in Makati, Metropolitan Manila, in the Philippines on October 19, 2007 at around 1:25 PM PST. Initial reports indicated that the explosion originated from an LPG tank explosion in an...
will be given an option to relocate there. 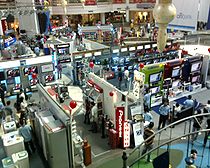 Glorietta was originally a park surrounded by establishments; in fact it was used as a location by Viva Films for its youth-oriented movie Hotshots. But in the early 1990s the Zobel De Ayala family decided to renovate Glorietta, Quad, Greenbelt and the whole of the Makati Commercial Center to a whole new mall which will carry the name Ayala Center
Ayala Center
The Ayala Center is a commercial complex operated by Ayala Land Incorporated located in the central business district of Makati in Metro Manila, Philippines.-About the Center:...
.

The plan was to recreate Glorietta to an indoor facility and integrate it with the remaining buildings surrounding it as well as the newly-constructed buildings that replaced the ones that's been torn-down namely the QUAD cinemas, By the mid and late 90s Glorietta reached its popularity as a premier mall.

The Glorietta mall was opened in 1991 having a gross leasable area of 250,000 m², envisioned as one of the largest malls in the Philippines. Still today, Glorietta Mall remains as one of the biggest in Metro Manila. Glorietta offers shopping and dining options ranging from apparel, accessories, home furniture, appliances to specialty brands. It has an air-conditioned atrium with water features, an indoor playground for children, and an activity center that hosts concerts and shows.

Other new buildings were also constructed in between 1999 and 2005, making Glorietta bigger than its original construction plan.

• Shopping Center of the Year (Philippine Retailer's Association and Department of Trade & Industry, 2002 & 2004)

On May 17, 2000, thirteen people were injured in an explosion at Glorietta. Police said the blast originated from a comfort room of a restaurant and affected a nearby video game arcade (Timezone
Timezone (video arcades)
Timezone is a chain of amusement arcade centres owned by Australian company Leisure and Allied Industries, with stores in Australia, New Zealand, Vietnam, India, Indonesia, Singapore and the Philippines.- Powercard :...
). Two rival "hip-hop" gangs were seen fighting near the restaurant shortly before the blast occurred.

On July 27, 2003, Magdalo soldiers led by Lt Sr Grade Antonio Trillanes
Antonio Trillanes IV
Antonio "Sonny" Fuentes Trillanes IV is a former Navy Lieutenant Senior Grade and concurrently serving as a senator of the Philippines since 2007....
took control of the Oakwood apartments in Makati City. Glorietta, where the Oakwood Premier stood, was also closed during the siege.

On February 14, 2005, a passenger bus was bombed in Makati City, near Glorietta. Four people were killed and 36 injured. On the same day, a mall in General Santos City was also bombed. Abu Sayyaf
Abu Sayyaf
Abu Sayyaf also known as al-Harakat al-Islamiyya is one of several military Islamist separatist groups based in and around the southern Philippines, in Bangsamoro where for almost 30 years various Muslim groups have been engaged in an insurgency for an independent province in the country...
claimed responsibility, with spokesperson Abu Solaiman saying on a radio interview: "This is our Valentine gift to Gloria
Gloria Macapagal-Arroyo
Gloria Macapagal-Arroyo is a Filipino politician who served as the 14th President of the Philippines from 2001 to 2010, as the 12th Vice President of the Philippines from 1998 to 2001, and is currently a member of the House of Representatives representing the 2nd District of Pampanga...
."

On October 19, 2007, an explosion in Glorietta 2 killed eleven people and injured a hundred others. Initially, authorities termed it a LPG explosion in a restaurant, but later began investigating the probability that the cause of the explosion was a C-4 bomb
C-4 (explosive)
C4 or Composition C4 is a common variety of the plastic explosive known as Composition C.-Composition and manufacture:C4 is made up of explosives, plastic binder, plasticizer and usually marker or odorizing taggant chemicals such as 2,3-dimethyl-2,3-dinitrobutane to help detect the explosive and...
. The explosion destroyed much of Glorietta 2's main lobby and vehicles parked outside.

Several days later, October 23, 2007, senior government officials expressed "a high level of certainty" that the explosion was an accident, but the bomb theory has not been totally ruled out. This was brought on by the inability of experts to find bomb components after four days of rigorous investigation. It is believed that the explosion was caused by underground structures in the mall that might have triggered the blast, pending further investigation.

Two days after the explosion, October 21, a fire broke out at around noon in the kitchen of one of the restaurants in Glorietta 4. It was put out by firemen an hour later. The authorities announced that this incident was in no way associated with the earlier Glorietta blast. Glorietta 4 was closed, right after this disaster, while the authority said that the open areas that is not affected by the disasters are business as usual.