Encyclopedia
Glasgow School of Art is one of only two independent art schools in Scotland, situated in the Garnethill
Garnethill
Garnethill is a predominantly residential area of the city of Glasgow, Scotland.-Geography:Located in the city centre, the area borders Cowcaddens to its north, Sauchiehall Street to its south, Cambridge Street to its east and the M8 motorway to its west....
area of Glasgow
Glasgow
Glasgow is the largest city in Scotland and third most populous in the United Kingdom. The city is situated on the River Clyde in the country's west central lowlands...
.

It was founded in 1845 as the Glasgow Government School of Design. In 1853, it changed its name to The Glasgow School of Art. Initially it was located at 12 Ingram Street, but in 1869 it moved to the McLellan Galleries
McLellan Galleries
The McLellan Galleries are an exhibition space in the city of Glasgow, Scotland. Built in 1856, the Galleries are named after their founder, Archibald McLellan , a coach builder, councillor and patron of the arts...
. In 1897, work started on a new building to house the school on Renfrew Street. The building was designed by Charles Rennie Mackintosh
Charles Rennie Mackintosh
Charles Rennie Mackintosh was a Scottish architect, designer, watercolourist and artist. He was a designer in the Arts and Crafts movement and also the main representative of Art Nouveau in the United Kingdom. He had a considerable influence on European design...
, chosen for the commission by the school's director, Francis Newbery
Francis Henry Newbery
Francis Henry Newbery or Fra Newbery was a painter and art educationist, best known as director of the Glasgow School of Art between 1885 and 1917. Under his leadership the School developed an international reputation and was associated with the flourishing of Glasgow Style and the work of Charles...
, who oversaw a period of expansion and fast-growing reputation. The first half of the building was completed in 1899 and the second in 1909. The School's campus has grown since that time and in 2009, an international architectural competition was held to find an architect-led design team who would develop the Campus Masterplan and design the Phase 1 building. The Phase 1 building is opposite the Mackintosh Building on a site now occupied by the Foulis, Assembly and Newbery Tower Buildings. The competition was won by New York based Steven Holl
Steven Holl
Steven Holl is an American architect and watercolorist, perhaps best known for the 1998 Kiasma Contemporary Art Museum in Helsinki, Finland, the 2003 Simmons Hall at MIT in Cambridge, Massachusetts, the celebrated 2007 Bloch Building addition to the Nelson-Atkins Museum of Art in Kansas City,...
Architects working with Glasgow based JM Architects.

Departments include Fine Art Photography, founded by Thomas Joshua Cooper
Thomas Joshua Cooper
Thomas Joshua Cooper is an American photographer of Cherokee descent. He is considered amongst the premier contemporary landscape photographers....
in 1982, Painting and Printmaking, Sculpture and Environmental Art, Product Design, Product Design Engineering, Textiles, Silversmithing and Jewellery, Interior Design, Visual Communication and Architecture. The School of Architecture is named after GSA's most famous alumnus, Charles Rennie Mackintosh
Charles Rennie Mackintosh
Charles Rennie Mackintosh was a Scottish architect, designer, watercolourist and artist. He was a designer in the Arts and Crafts movement and also the main representative of Art Nouveau in the United Kingdom. He had a considerable influence on European design...
, and is highly rated by the architecture profession. 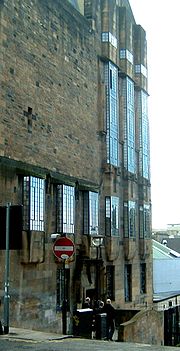 The school currently has two separate campuses, with Fine Art, MFA, Sculpture and Environmental Art being located in the vicinity of the Mackintosh building, and Textiles, Jewellery & Silversmithing, Product Design Engineering, Product Design, Visual Communications departments,the Centre for Advanced Textiles and the Refectory cafeteria, a second branch of Where the Monkey Sleeps, a city centre cafe and restaurant run by three ex-graduates are located in a new, temporary, campus
Campus
A campus is traditionally the land on which a college or university and related institutional buildings are situated. Usually a campus includes libraries, lecture halls, residence halls and park-like settings...
the Sky Park, in Finnieston
Finnieston
Finnieston is an area of Glasgow, Scotland, situated on the North bank of the River Clyde and between the city's West End and the city centre. It is home to the SECC, where many musical concerts and important conferences are held...
whilst the developing the current Garnethill
Garnethill
Garnethill is a predominantly residential area of the city of Glasgow, Scotland.-Geography:Located in the city centre, the area borders Cowcaddens to its north, Sauchiehall Street to its south, Cambridge Street to its east and the M8 motorway to its west....
campus is on going.

The Mackintosh Building is the heart of the campus and continues to be a functioning part of the school. It primarily houses the Fine Art
Fine art
Fine art or the fine arts encompass art forms developed primarily for aesthetics and/or concept rather than practical application. Art is often a synonym for fine art, as employed in the term "art gallery"....
Painting department, the Interior Design department, first year studios and administrative staff. It also houses the Mackintosh gallery which holds many different exhibitions throughout the year. The gallery is the only part of the Mackintosh building open to the general public; all other areas are of the school are only viewable by guided tour. An exception to this rule is the Degree Show where all the studios within the Mackintosh building are opened to allow people to view the graduating year's final artworks.

The Barnes Building on West Graham Street is the base for the MFA and Sculpture and environmental art studios.

After the regeneration The Mackintosh building will still be centrepiece of the campus, though there are plans to sell off some of the more peripheral buildings and to redevelop the Newbery site. The building which houses the Assembly Building adjacent to the Mackintosh Building will be redeveloped and retain its existing facade. As part of the planned expansion, the art school has taken control of Glasgow City Council's McLellan Galleries
McLellan Galleries
The McLellan Galleries are an exhibition space in the city of Glasgow, Scotland. Built in 1856, the Galleries are named after their founder, Archibald McLellan , a coach builder, councillor and patron of the arts...
.

An international architectural competition was launched in March 2009 to find the design team to prepare a campus masterplan and detailed design of the first new building phase.

GSA has a research and postgraduate Digital Design Studio
Digital Design Studio
The Digital Design Studio is a research and postgraduate centre of Glasgow School of Art, specialising in 3D digital visualisation and interaction technologies.-History:...
(DDS) based on the southside of Glasgow in a new facility at Pacific Quay
Pacific Quay
Pacific Quay is an area south of the River Clyde in Glasgow, Scotland. It is located at the former Plantation Quay and Princes' Dock Basin. The Princes' Dock Basin was the largest on the River Clyde when it was opened in 1900. It ceased to be used in the 1970s as the volume of Shipping using the...
by the River Clyde
River Clyde
The River Clyde is a major river in Scotland. It is the ninth longest river in the United Kingdom, and the third longest in Scotland. Flowing through the major city of Glasgow, it was an important river for shipbuilding and trade in the British Empire....
in a building called The Hub.

Of its 1,900 students, almost 20 per cent are from outside the UK and approximately 20% are postgraduate.

HESA statistics show GSA to have one of the lowest student drop-out rates in the UK.

The GSA has been ranked eleventh of 32 specialist educational institutions in terms of teaching quality.

The Assembly Building houses the Glasgow School of Art Student Association's (GSASA) administrative offices. These are known by many of the staff and students as "The Vic" due to the remains of a Victorian cafe, called The Victoria cafe, saved from beneath a condemned building in the 1960s.

The GSASA also has different societies including the Mural society, LGBT society, Cinema Society and the Real Ale Appreciation Society.

The Vic is also a venue which hosts many popular club nights. 'R-P-Z' (formerly known as 'Record Playerz') host their nightclub every Thursday.

The SRC is a body of students elected by fellow students. meet once a month with different sections of the school to discuss issues affecting the students.