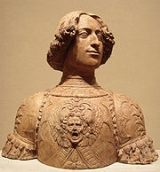 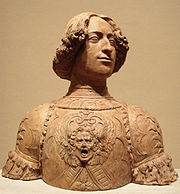 Giuliano de' Medici was the second son of Piero de' Medici
Piero di Cosimo de' Medici
Piero di Cosimo de' Medici , , was the de facto ruler of Florence from 1464 to 1469, during the Italian Renaissance. He was the father of Lorenzo the Magnificent and Giuliano de' Medici-Biography:Piero was born in Florence, the son of Cosimo de' Medici the Elder and Contessina de' Bardi...
(the Gouty) and Lucrezia Tornabuoni
Lucrezia Tornabuoni
Lucrezia Tornabuoni was a daughter of Francesco di Simone Tornabuoni and Nanna di Niccolo di Luigi Guicciardini. Her brother was Giovanni Tornabuoni.- Biography :...
. As co-ruler of Florence
Florence
Florence is the capital city of the Italian region of Tuscany and of the province of Florence. It is the most populous city in Tuscany, with approximately 370,000 inhabitants, expanding to over 1.5 million in the metropolitan area....
, with his brother Lorenzo the Magnificent
Lorenzo de' Medici
Lorenzo de' Medici was an Italian statesman and de facto ruler of the Florentine Republic during the Italian Renaissance. Known as Lorenzo the Magnificent by contemporary Florentines, he was a diplomat, politician and patron of scholars, artists and poets...
, he complemented his brother's image as the "patron of the arts" with his own image as the handsome, sporting, "golden boy."

As the opening stroke of the Pazzi Conspiracy, he was assassinated
Assassination
To carry out an assassination is "to murder by a sudden and/or secret attack, often for political reasons." Alternatively, assassination may be defined as "the act of deliberately killing someone, especially a public figure, usually for hire or for political reasons."An assassination may be...
on 26 April 1478 in the Duomo of Florence, Santa Maria del Fiore
Santa Maria del Fiore
The Basilica di Santa Maria del Fiore is the cathedral church of Florence, Italy. The Duomo, as it is ordinarily called, was begun in 1296 in the Gothic style to the design of Arnolfo di Cambio and completed structurally in 1436 with the dome engineered by Filippo Brunelleschi...
, by Francesco de' Pazzi and Bernardo Bandini. He was killed by a sword wound to the head and was stabbed 19 times.

Giuliano was buried in his father's tomb in the Church of San Lorenzo
Basilica di San Lorenzo di Firenze
The Basilica di San Lorenzo is one of the largest churches of Florence, Italy, situated at the centre of the city’s main market district, and the burial place of all the principal members of the Medici family from Cosimo il Vecchio to Cosimo III...
but later, with his brother Lorenzo, was reinterred in the Medici Chapel
Medici Chapel
The Medici Chapels is a structure in the Basilica of San Lorenzo, Florence, Italy. It comprises two structures added to Brunelleschi's original design, each intended to celebrate the power of the Medici as Grand Dukes of Tuscany. One is the Sagrestia Nuova, the "New Sacristy", designed by...
of the same church, in an unmarked tomb surmounted by a statue of the Madonna and Child of Michelangelo
Michelangelo
Michelangelo di Lodovico Buonarroti Simoni , commonly known as Michelangelo, was an Italian Renaissance painter, sculptor, architect, poet, and engineer who exerted an unparalleled influence on the development of Western art...
.