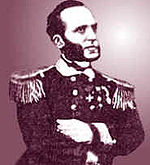 Giovanni Biagio Luppis von Rammer (27 August 1813 – 11 January 1875) was an officer of the Austrian Navy
Austro-Hungarian Navy
The Austro-Hungarian Navy was the naval force of Austria-Hungary. Its official name in German was Kaiserliche und Königliche Kriegsmarine , abbreviated as k.u.k. Kriegsmarine....
who had the idea of the first self-propelled torpedo
Torpedo
The modern torpedo is a self-propelled missile weapon with an explosive warhead, launched above or below the water surface, propelled underwater towards a target, and designed to detonate either on contact with it or in proximity to it.The term torpedo was originally employed for...
.

Giovanni Luppis (or Lupis) was born in the city of Rijeka
Rijeka
Rijeka is the principal seaport and the third largest city in Croatia . It is located on Kvarner Bay, an inlet of the Adriatic Sea and has a population of 128,735 inhabitants...
(Fiume) in 1813, which was at the time part of the Illyrian Provinces
Illyrian provinces
The Illyrian Provinces was an autonomous province of the Napoleonic French Empire on the north and east coasts of the Adriatic Sea between 1809 and 1816. Its capital was established at Laybach...
, but soon passed back to Austria. His parents where Ferdinando Carlo, nobleman of Poreč
Porec
Poreč is a town and municipality on the western coast of the Istrian peninsula, in Istria County, Croatia. Its major landmark is the 6th century Euphrasian Basilica, a UNESCO World Heritage Site since 1997....
(Parenzo) and Vis
Vis (island)
Vis is the most outerly lying larger Croatian island in the Adriatic Sea, and is part of the Central Dalmatian group of islands, with an area of 90.26 km² and a population of 3,617 . Of all the inhabited Croatian islands, it is the farthest from the coast...
(Lissa) and Giovanna Parich, noble of Dubrovnik
Dubrovnik
Dubrovnik is a Croatian city on the Adriatic Sea coast, positioned at the terminal end of the Isthmus of Dubrovnik. It is one of the most prominent tourist destinations on the Adriatic, a seaport and the centre of Dubrovnik-Neretva county. Its total population is 42,641...
(Ragusa). In the city of Rijeka, Giovanni Luppis's family has been powerful shipowners. Lupis attended a gymnasium
Gymnasium (school)
A gymnasium is a type of school providing secondary education in some parts of Europe, comparable to English grammar schools or sixth form colleges and U.S. college preparatory high schools. The word γυμνάσιον was used in Ancient Greece, meaning a locality for both physical and intellectual...
in Rijeka and the Collegio di marina, the Austrian naval academy
Military academy
A military academy or service academy is an educational institution which prepares candidates for service in the officer corps of the army, the navy, air force or coast guard, which normally provides education in a service environment, the exact definition depending on the country concerned.Three...
in Venice
Venice
Venice is a city in northern Italy which is renowned for the beauty of its setting, its architecture and its artworks. It is the capital of the Veneto region...
. Then he married a noblewoman, the Baroness Elisa de Zotti.

He served in the Venezianisch-Österreichische Kriegsmarine
Austro-Hungarian Navy
The Austro-Hungarian Navy was the naval force of Austria-Hungary. Its official name in German was Kaiserliche und Königliche Kriegsmarine , abbreviated as k.u.k. Kriegsmarine....
(after 1849 K.u.K Kriegsmarine ) and rose up the ranks to the position of Frigate
Frigate
A frigate is any of several types of warship, the term having been used for ships of various sizes and roles over the last few centuries.In the 17th century, the term was used for any warship built for speed and maneuverability, the description often used being "frigate-built"...
Captain
Captain (naval)
Captain is the name most often given in English-speaking navies to the rank corresponding to command of the largest ships. The NATO rank code is OF-5, equivalent to an army full colonel....
(Fregattenkapitan). In 1848/1849 he was an officer on the ships that blocked Venice
Venice
Venice is a city in northern Italy which is renowned for the beauty of its setting, its architecture and its artworks. It is the capital of the Veneto region...
.

About the middle in the 19th century, an officer of the Austrian Marine Artillery conceived the idea of employing a small boat carrying a large charge of explosives, powered by a steam or an air engine and remotely steered by cable to be used against enemy ships. Upon his death, before he had perfected his invention or made it public, the papers of this anonymous officer came into the possession of Capt. Giovanni Luppis. 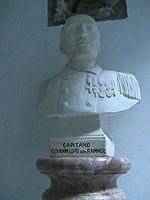 He envisioned a floating device for destroying ships that would be unmanned and controlled from land, while the explosive charges would detonate at the moment of impact. His first prototype was one metre long, had glass wings, and was controlled via long ropes from the coast. It didn't succeed due to primitive implementation.

The second model was built with a clock mechanism as the engine for the propeller
Propeller
A propeller is a type of fan that transmits power by converting rotational motion into thrust. A pressure difference is produced between the forward and rear surfaces of the airfoil-shaped blade, and a fluid is accelerated behind the blade. Propeller dynamics can be modeled by both Bernoulli's...
. The explosives were in the stern
Stern
The stern is the rear or aft-most part of a ship or boat, technically defined as the area built up over the sternpost, extending upwards from the counter rail to the taffrail. The stern lies opposite of the bow, the foremost part of a ship. Originally, the term only referred to the aft port section...
and were ignited through a pistol-like control, which in turn was activated through the bow, the sides or the mast. It had two rudder
Rudder
A rudder is a device used to steer a ship, boat, submarine, hovercraft, aircraft or other conveyance that moves through a medium . On an aircraft the rudder is used primarily to counter adverse yaw and p-factor and is not the primary control used to turn the airplane...
s: one turned to the right, the other to the left, that were moved by ropes/wires from land. After numerous experiments, this design, marked '6 m', finally performed well enough. He nicknamed it 'Salvacoste', Italian for "Coastsaver".

In 1860, after Luppis had retired from the Navy, he managed to demonstrate the '6 m' design to the emperor Franz Joseph, and it was a success, but the naval commission refused to accept it without better propulsion and control systems.


The meeting with Robert Whitehead

In 1864 Fiume/Rijeka the future mayor Giovanni de Ciotta
Giovanni de Ciotta
Giovanni de Ciotta was the first-born son of Lorenzo de Ciotta and Adriana Maria de Adamich, daughter of the foremost Fiuman merchant and father of modernisation in Fiume Andrea Lodovico de Adamich. The family de Ciotta originated from Livorno where Giovanni served the Austrian army in quality of...
introduced Luppis to the British machine engineer Robert Whitehead
Robert Whitehead
Robert Whitehead was an English engineer. He developed the first effective self-propelled naval torpedo. His company, located in the Austrian naval centre in Fiume, was the world leader in torpedo development and production up to the First World War.- Early life:He was born the son of a...
, manager of the local factory 'Stabilimento Tecnico Fiumano', with whom he signed a contract to develop the 'salvacoste' further.

Whitehead built a model but decided that the idea was not viable. He did however start to think about the problem of setting off explosive charges remotely below a ship's waterline, this being far more effective than above-water bombardment. Whitehead made a device running under water and installed an engine running on compressed air, as well as automatic guidances for the depth and direction.

Whitehead had significantly altered the original design, but always credited Lupis with the invention.

On 21 December 1866 the first automobile torpedo, now named Minenschiff, was officially demonstrated in front of the Austro-Hungarian state commission for evaluation. This model was 355 mm in diameter and 3.35 m in length, weighing 136 kg with 8 kg of explosives. The naval commission accepted it, and subsequently on 6 March 1867 the government contracted the inventors for a test production and agreed to pay all the production costs.

Whitehead retained the copyrights and even negotiated a new contract with Luppis which gave Whitehead full control of all future sales.

On 27 May 1867, the navy paid 200,000 forints
Hungarian forint
The forint is the currency of Hungary. It is divided into 100 fillér, although fillér coins are no longer in circulation. The introduction of the forint on 1 August 1946 was a crucial step of the post-WWII stabilization of the Hungarian economy, and the currency remained relatively stable until...
in royalties to the inventor.
The invention was generally regarded as a promising one, but in the first years of production there were not enough orders, so 'Stabilimento' went through a crisis and went bankrupt in 1873. R. Whitehead took it over and at the beginning of 1875 transformed it into a private company called 'Torpedo-Fabrik von Robert Whitehead'.

Giovanni Luppis was given the noble title of Baron von Rammer ('the sinker') on 1 August 1869. He died in the borough (frazione) of Torriggia, in the municipality of Laglio
Laglio
Laglio is a small comune on the western shore of the south-western branch of Lake Como. Administratively it falls within the Province of Como in the northern Italian region of Lombardy...
, near Como
Como
Como is a city and comune in Lombardy, Italy.It is the administrative capital of the Province of Como....
on 11 January 1875.