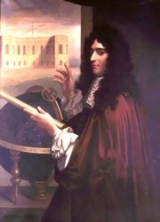 Overview
This article is about the Italian-born astronomer. For his French-born great-grandson, see Jean-Dominique Cassini
Dominique, comte de Cassini
This article is about the French astronomer. For his Italian-born great-grandfather, see Giovanni Domenico Cassini.Jean-Dominique, comte de Cassini was a French astronomer, son of César-François Cassini de Thury....
.

Giovanni Domenico Cassini (June 8, 1625 – September 14, 1712) was an Italian
Italy
Italy , officially the Italian Republic languages]] under the European Charter for Regional or Minority Languages. In each of these, Italy's official name is as follows:;;;;;;;;), is a unitary parliamentary republic in South-Central Europe. To the north it borders France, Switzerland, Austria and...
/French
France
The French Republic , The French Republic , The French Republic , (commonly known as France , is a unitary semi-presidential republic in Western Europe with several overseas territories and islands located on other continents and in the Indian, Pacific, and Atlantic oceans. Metropolitan France...
mathematician
Mathematician
A mathematician is a person whose primary area of study is the field of mathematics. Mathematicians are concerned with quantity, structure, space, and change....
, astronomer
Astronomer
An astronomer is a scientist who studies celestial bodies such as planets, stars and galaxies.Historically, astronomy was more concerned with the classification and description of phenomena in the sky, while astrophysics attempted to explain these phenomena and the differences between them using...
, engineer
Engineer
An engineer is a professional practitioner of engineering, concerned with applying scientific knowledge, mathematics and ingenuity to develop solutions for technical problems. Engineers design materials, structures, machines and systems while considering the limitations imposed by practicality,...
, and astrologer
Astrologer
An astrologer practices one or more forms of astrology. Typically an astrologer draws a horoscope for the time of an event, such as a person's birth, and interprets celestial points and their placements at the time of the event to better understand someone, determine the auspiciousness of an...
. Cassini, also known as Giandomenico Cassini or Jean-Dominique Cassini, was born in Perinaldo
Perinaldo
Perinaldo is a comune in the Province of Imperia in the Italian region Liguria, located about 120 km southwest of Genoa and about 30 km west of Imperia....
, near Sanremo
Sanremo
Sanremo or San Remo is a city with about 57,000 inhabitants on the Mediterranean coast of western Liguria in north-western Italy. Founded in Roman times, the city is best known as a tourist destination on the Italian Riviera. It hosts numerous cultural events, such as the Sanremo Music Festival...
, at that time in the Republic of Genova.
Cassini was an astronomer at the Panzano Observatory
Panzano Observatory
The Panzano Observatory was an observatory in the village of Panzano about to the NNW of the centre of the comune of Castelfranco Emilia, near Bologna, Italy, where Giovanni Cassini worked....
, from 1648 to 1669.