Encyclopedia
The 15th German federal election, 2002 was conducted on 22 September 2002, to elect members to the Bundestag
Bundestag
The Bundestag is a federal legislative body in Germany. In practice Germany is governed by a bicameral legislature, of which the Bundestag serves as the lower house and the Bundesrat the upper house. The Bundestag is established by the German Basic Law of 1949, as the successor to the earlier...
(lower house) of Germany
Germany
Germany , officially the Federal Republic of Germany , is a federal parliamentary republic in Europe. The country consists of 16 states while the capital and largest city is Berlin. Germany covers an area of 357,021 km2 and has a largely temperate seasonal climate...
.

Several issues dominated the campaign, with the opposition CDU/CSU attacking the government's performance on the economy as well as campaigning on family values issues and against taxes (particularly on fuel). The government, on the other hand, was helped by broad support for its opposition to the Iraq War
2003 invasion of Iraq
The 2003 invasion of Iraq , was the start of the conflict known as the Iraq War, or Operation Iraqi Freedom, in which a combined force of troops from the United States, the United Kingdom, Australia and Poland invaded Iraq and toppled the regime of Saddam Hussein in 21 days of major combat operations...
and by Gerhard Schröder
Gerhard Schröder
Gerhard Fritz Kurt Schröder is a German politician, and was Chancellor of Germany from 1998 to 2005. A member of the Social Democratic Party of Germany , he led a coalition government of the SPD and the Greens. Before becoming a full-time politician, he was a lawyer, and before becoming Chancellor...
's personal popularity relative to the opposition's candidate for Chancellor, CSU leader Edmund Stoiber
Edmund Stoiber
Edmund Rüdiger Stoiber is a German politician, former minister-president of the state of Bavaria and former chairman of the Christian Social Union...
.

Early in the campaign, Guido Westerwelle
Guido Westerwelle
Guido Westerwelle [] is a German liberal politician, who, since 28 October 2009, has been serving as the Foreign Minister in the second cabinet of Chancellor Angela Merkel, and who was Vice Chancellor of Germany from 2009 to 2011. He is the first openly gay person to hold either of those positions...
, leader of the Free Democrats
Free Democratic Party (Germany)
The Free Democratic Party , abbreviated to FDP, is a centre-right classical liberal political party in Germany. It is led by Philipp Rösler and currently serves as the junior coalition partner to the Union in the German federal government...
, declared himself a "Chancellor Candidate," usually a title reserved for the main election leaders of the SDP and CDU/CSU. This was met with general derision.

Although the opposition gained seats, and the result was in doubt for most of the election night, the governing coalition retained a narrow majority. In particular, the SPD was able to partially offset declines in their vote share in the West with an increase in the East, with the PDS falling below both the 5% threshold and the 3-seat threshold, either of which is required to qualify a party for top-up seats. Consequently the PDS held only two directly-elected seats. 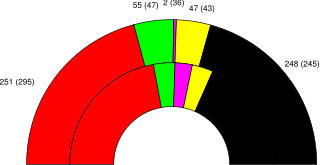 The coalition between the SPD and the Greens continued in government with Gerhard Schröder
Gerhard Schröder
Gerhard Fritz Kurt Schröder is a German politician, and was Chancellor of Germany from 1998 to 2005. A member of the Social Democratic Party of Germany , he led a coalition government of the SPD and the Greens. Before becoming a full-time politician, he was a lawyer, and before becoming Chancellor...
as chancellor.