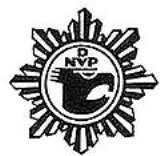 Encyclopedia
The German National People's Party was a national conservative
National conservatism
National conservatism is a political term used primarily in Europe to describe a variant of conservatism which concentrates more on national interests than standard conservatism as well as upholding cultural and ethnic identity, while not being outspokenly nationalist or supporting a far-right...
party in Germany
Germany
Germany , officially the Federal Republic of Germany , is a federal parliamentary republic in Europe. The country consists of 16 states while the capital and largest city is Berlin. Germany covers an area of 357,021 km2 and has a largely temperate seasonal climate...
during the time of the Weimar Republic
Weimar Republic
The Weimar Republic is the name given by historians to the parliamentary republic established in 1919 in Germany to replace the imperial form of government...
. Before the rise of the NSDAP it was the main nationalist
Nationalism
Nationalism is a political ideology that involves a strong identification of a group of individuals with a political entity defined in national terms, i.e. a nation. In the 'modernist' image of the nation, it is nationalism that creates national identity. There are various definitions for what...
party in Weimar Germany composed of nationalists, reactionary monarchists
Monarchism
Monarchism is the advocacy of the establishment, preservation, or restoration of a monarchy as a form of government in a nation. A monarchist is an individual who supports this form of government out of principle, independent from the person, the Monarch.In this system, the Monarch may be the...
, völkisch
Völkisch movement
The volkisch movement is the German interpretation of the populist movement, with a romantic focus on folklore and the "organic"...
, and antisemitic elements, and supported by the Pan-German League
Pan-German League
The Pan-German League was an extremist, ultra-nationalist political interest organization which was officially founded in 1891, a year after the Zanzibar Treaty was signed. It was concerned with a host of issues, concentrating on imperialism, anti-semitism, the so called Polish Question, and...
.

The party was formed in 1918 by a merger of the German Conservative Party
German Conservative Party
The German Conservative Party was a right-wing political party of the German Empire, founded in 1876.- Policies :It was generally seen as representing the interests of the German nobility, the East Elbian Junkers and the Evangelical Church of the Prussian Union, and had its political stronghold...
, the Free Conservative Party
Free Conservative Party
The Free Conservative Party was a right-wing political party in Prussia and the German Empire, which emerged from the Conservatives in the Prussian Landtag in 1866...
and a section of the National Liberal Party
National Liberal Party (Germany)
The National Liberal Party was a German political party which flourished between 1867 and 1918. It was formed by Prussian liberals who put aside their differences with Bismarck over domestic policy due to their support for his highly successful foreign policy, which resulted in the unification of...
of the old monarchic German Empire
German Empire
The German Empire refers to Germany during the "Second Reich" period from the unification of Germany and proclamation of Wilhelm I as German Emperor on 18 January 1871, to 1918, when it became a federal republic after defeat in World War I and the abdication of the Emperor, Wilhelm II.The German...
.
Generally hostile towards the republican Weimar constitution
Weimar constitution
The Constitution of the German Reich , usually known as the Weimar Constitution was the constitution that governed Germany during the Weimar Republic...
, the DNVP spent most of the inter-war period in opposition. Largely supported by landowners and wealthy industrialists, it favoured a monarchist platform and was strongly opposed to the Treaty of Versailles
Treaty of Versailles
The Treaty of Versailles was one of the peace treaties at the end of World War I. It ended the state of war between Germany and the Allied Powers. It was signed on 28 June 1919, exactly five years after the assassination of Archduke Franz Ferdinand. The other Central Powers on the German side of...
.

Extremely nationalistic and reactionary and originally favouring restoration of German monarchy, it later supported creation of an authoritarian state. Its supporters came from dedicated nationalists, the aristocracy, parts of the middle class and big business. While it sought the ultimate demise of Weimar Republic, it participated in its politics and ruling government to keep Socialists out of power. Before its alliance with Nazis, the party sought support of the national liberal German People's Party
German People's Party
The German People's Party was a national liberal party in Weimar Germany and a successor to the National Liberal Party of the German Empire.-Ideology:...
.

Between 1925 and 1928, the party slightly moderated its tone and actively cooperated in successive governments. In 1928, however, after a disastrous showing at the polls (the party's share of votes fell from 21% in 1924 to 14%), Alfred Hugenberg
Alfred Hugenberg
Alfred Ernst Christian Alexander Hugenberg was an influential German businessman and politician. Hugenberg, a leading figure within nationalist politics in Germany for the first few decades of the twentieth century, became the country's leading media proprietor within the inter-war period...
, leader of the party's hardliner wing, became chairman. Hugenberg returned the party to a course of fundamental opposition against the Republic, but abandoned its previous monarchism in favour of more hardline nationalism
Nationalism
Nationalism is a political ideology that involves a strong identification of a group of individuals with a political entity defined in national terms, i.e. a nation. In the 'modernist' image of the nation, it is nationalism that creates national identity. There are various definitions for what...
and reluctant co-operation with the National Socialist German Workers Party
National Socialist German Workers Party
The National Socialist German Workers' Party , commonly known in English as the Nazi Party, was a political party in Germany between 1920 and 1945. Its predecessor, the German Workers' Party , existed from 1919 to 1920...
(NSDAP), better known as the Nazi Party. In 1929, this resulted in the former chairman Kuno Graf von Westarp and other members leaving the party and forming the more moderate Conservative People's Party
Conservative People's Party (Germany)
The Conservative People's Party was a short-lived German political party of the moderate right. Breaking away from the German National People's Party in the late 1920s as a result of that party's increasing radicalization under the leadership of Alfred Hugenberg...
. The DNVP was declining rapidly as many workers and peasants began to support the more populist and less aristocratic NSDAP, leaving the party with mostly upper middle class and upper class support. 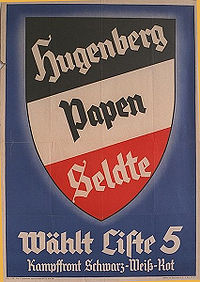 In 1931, the DNVP, the NSDAP and the Stahlhelm paramilitary organisation briefly formed an uneasy alliance known as the Harzburger Front. The DNVP hoped to control the NSDAP through this coalition and to curb the Nazis' extremism, but the pact only served to strengthen the NSDAP by giving it access to funding and political respectability while obscuring the DNVP's own less extreme platform.

The following year, the DNVP became the only significant party to support Franz von Papen
Franz von Papen
Lieutenant-Colonel Franz Joseph Hermann Michael Maria von Papen zu Köningen was a German nobleman, Roman Catholic monarchist politician, General Staff officer, and diplomat, who served as Chancellor of Germany in 1932 and as Vice-Chancellor under Adolf Hitler in 1933–1934...
in his short tenure as Chancellor. Performing badly in subsequent elections, the party ended up as junior coalition partners to the NSDAP in the so-called, short-lived Regierung der nationalen Konzentration (Government of National Concentration) on Adolf Hitler
Adolf Hitler
Adolf Hitler was an Austrian-born German politician and the leader of the National Socialist German Workers Party , commonly referred to as the Nazi Party). He was Chancellor of Germany from 1933 to 1945, and head of state from 1934 to 1945...
's appointment as Chancellor in 1933, supporting the Enabling Act that authorised Hitler's government with legislative powers.

Hitler's patience with his conservative allies was limited, and the DNVP representatives in his first Cabinet were quickly bullied into resignation. Shortly thereafter, DNVP members were coerced into joining the NSDAP or retiring from political life altogether. The party dissolved itself and shortly after this the founding of political parties was outlawed in 1933.