Encyclopedia
The German Chancellery is a federal agency
Federal agency (Germany)
Federal agencies in Germany are established to assist the country's executive branch on the federal level according to of the Basic Law for the Federal Republic of Germany...
serving the executive office of the Chancellor
Chancellor of Germany
The Chancellor of Germany is, under the German 1949 constitution, the head of government of Germany...
, the head of the German
Germany
Germany , officially the Federal Republic of Germany , is a federal parliamentary republic in Europe. The country consists of 16 states while the capital and largest city is Berlin. Germany covers an area of 357,021 km2 and has a largely temperate seasonal climate...
federal government. The chief of the Chancellery (Chef des Bundeskanzleramtes) holds the rank of either a Secretary of State
Secretary of State
Secretary of State or State Secretary is a commonly used title for a senior or mid-level post in governments around the world. The role varies between countries, and in some cases there are multiple Secretaries of State in the Government....
(Staatssekretär) or a Federal Minister (Bundesminister). The agency's primary function is to assist the Chancellor in coordinating the activities of the Federal Government. The current chief of the Chancellery is Minister Ronald Pofalla
Ronald Pofalla
Ronald Pofalla is a German politician, currently serving as the Chief of Staff of the German Chancellery and a Federal Minister for Special Affairs in the Second Cabinet Merkel....
.

Bundeskanzleramt is also the name of the building in Berlin
Berlin
Berlin is the capital city of Germany and is one of the 16 states of Germany. With a population of 3.45 million people, Berlin is Germany's largest city. It is the second most populous city proper and the seventh most populous urban area in the European Union...
that houses the personal offices of the Chancellor and the Chancellery staff. 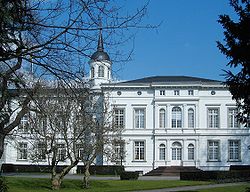 The current Chancellery building (opened in the spring of 2001) was designed by Charlotte Frank and Axel Schultes and was built by a joint venture of Royal BAM Group's subsidiary Wayss & Freytag and the Spanish Acciona
Acciona
Acciona, S.A., is a Spanish conglomerate group dedicated to civil engineering, construction and infrastructure.The company was founded in 1997 through the merger of Entrecanales y Tavora and Cubiertas y MZOV. The company's headquarters is in Alcobendas, Community of Madrid, Spain. The company's U.S...
from concrete and glass in an essentially postmodern
Postmodern architecture
Postmodern architecture began as an international style the first examples of which are generally cited as being from the 1950s, but did not become a movement until the late 1970s and continues to influence present-day architecture...
style, though some elements of modernist
Modern architecture
Modern architecture is generally characterized by simplification of form and creation of ornament from the structure and theme of the building. It is a term applied to an overarching movement, with its exact definition and scope varying widely...
style are evident. Occupying 12,000 square meters (129,166 square feet), it is also one of the largest government headquarters buildings in the world. By comparison, the new Chancellery building is eight times the size of the White House
White House
The White House is the official residence and principal workplace of the president of the United States. Located at 1600 Pennsylvania Avenue NW in Washington, D.C., the house was designed by Irish-born James Hoban, and built between 1792 and 1800 of white-painted Aquia sandstone in the Neoclassical...
. A semi official Chancellor apartment is located on the top floor of the building. The 200 square meters two-room flat was only occupied by Gerhard Schröder. Mrs. Merkel uses her private apartment in Berlin.
Because of its distinctive but controversial architecture, journalists, tourist guides and some locals refer to the buildings as Kohllosseum (as a mix of collosseum and former chancellor Helmut Kohl
Helmut Kohl
Helmut Josef Michael Kohl is a German conservative politician and statesman. He was Chancellor of Germany from 1982 to 1998 and the chairman of the Christian Democratic Union from 1973 to 1998...
under whom it was built), Bundeswaschmaschine (federal laundry machine; because of the round-shaped windows and its cubic form), or Elefantenklo (elephant loo).


Heads of the Chancellery

Chiefs (Directors) of the Chancellery attend Cabinet meetings. They may also sit as members of the Cabinet if they are also given the position of Minister for Special Affairs
Minister without Portfolio
A minister without portfolio is either a government minister with no specific responsibilities or a minister that does not head a particular ministry...
(Minister für besondere Aufgaben). They are often called "Kanzleramtsminister" (chancellery minister).