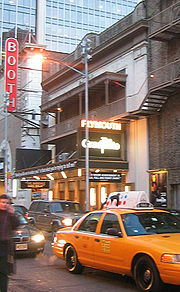 The Gerald Schoenfeld Theatre is a Broadway
Broadway theatre
Broadway theatre, commonly called simply Broadway, refers to theatrical performances presented in one of the 40 professional theatres with 500 or more seats located in the Theatre District centered along Broadway, and in Lincoln Center, in Manhattan in New York City...
theatre located at 236 West 45th Street (George Abbott Way
George Abbott Way
George Abbott Way is a section of West 45th Street northwest of Times Square in New York City, named for famed Broadway producer and director George Abbott...
) in midtown-Manhattan
Manhattan
Manhattan is the oldest and the most densely populated of the five boroughs of New York City. Located primarily on the island of Manhattan at the mouth of the Hudson River, the boundaries of the borough are identical to those of New York County, an original county of the state of New York...
named for Gerald Schoenfeld
Gerald Schoenfeld
Gerald Schoenfeld was chairman of the Shubert Organization from 1972 until his death....
.

Designed by architect
Architect
An architect is a person trained in the planning, design and oversight of the construction of buildings. To practice architecture means to offer or render services in connection with the design and construction of a building, or group of buildings and the space within the site surrounding the...
Herbert J. Krapp
Herbert J. Krapp
Herbert J. Krapp was a theatre architect and designer in the early part of the twentieth century.Krapp was an apprentice with the Herts & Tallant firm, where he was involved with designing the plans for the Lyceum, Shubert, Booth, New Amsterdam and Longacre Theatres, among others. He departed the...
to resemble the neighboring Shubert
Shubert Theatre
Shubert Theatre or Shubert Theater may refer to:Theatres*Shubert Theatre , New York City, built in 1913.*Shubert Theatre , Connecticut, built in 1914.*Shubert Theatre , California, demolished in 2002....
and Booth
Booth Theatre
The Booth Theatre is a Broadway theatre located at 222 West 45th Street in midtown-Manhattan, New York City.Architect Henry B. Herts designed the Booth and its companion Shubert Theatre as a back-to-back pair sharing a Venetian Renaissance-style façade...
theatres designed by Henry B. Herts, the building was constructed by the Shubert brothers
Shubert family
The Shubert family of New York City, New York was responsible for the establishment of the Broadway district, in New York City, as the hub of the theatre industry in the United States...
in 1917-18, christened the Plymouth Theatre, and leased to producer Arthur Hopkins. He intended it to be a venue for legitimate plays starring notable actors like John
John Barrymore
John Sidney Blyth , better known as John Barrymore, was an acclaimed American actor. He first gained fame as a handsome stage actor in light comedy, then high drama and culminating in groundbreaking portrayals in Shakespearean plays Hamlet and Richard III...
and Lionel Barrymore
Lionel Barrymore
Lionel Barrymore was an American actor of stage, screen and radio. He won an Academy Award for Best Actor for his performance in A Free Soul...
. The premiere production was A Successful Calamity, a comedy with William Gillette
William Gillette
William Hooker Gillette was an American actor, playwright and stage-manager in the late nineteenth and early twentieth centuries who is best remembered today for portraying Sherlock Holmes....
and Estelle Winwood
Estelle Winwood
Estelle Winwood was an English stage and film actress who moved to the United States in mid-career and became celebrated for her longevity.-Early life and early career:...
.

The limited engagement drama A Steady Rain, which starred Daniel Craig
Daniel Craig
Daniel Wroughton Craig is an English actor. His early film roles include Elizabeth, The Power of One, A Kid in King Arthur's Court and the television episodes Sharpe's Eagle, Zorro and The Young Indiana Jones Chronicles: Daredevils of the Desert...
and Hugh Jackman
Hugh Jackman
Hugh Michael Jackman is an Australian actor and producer who is involved in film, musical theatre, and television.Jackman has won international recognition for his roles in major films, notably as action/superhero, period and romance characters...
, achieved the box office record for the Gerald Schoenfeld Theatre. The production grossed $1,292,210 over eight performances, for the week ending December 6th, 2009.