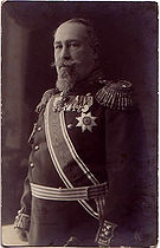 Encyclopedia
Georgi Stoyanov Todorov (born on 10 August 1858 in Bolgrad (contemporary Ukraine
Ukraine
Ukraine is a country in Eastern Europe. It has an area of 603,628 km², making it the second largest contiguous country on the European continent, after Russia...
); died on 16 November 1934 in Sofia
Sofia
Sofia is the capital and largest city of Bulgaria and the 12th largest city in the European Union with a population of 1.27 million people. It is located in western Bulgaria, at the foot of Mount Vitosha and approximately at the centre of the Balkan Peninsula.Prehistoric settlements were excavated...
) was a Bulgarian
Bulgarians
The Bulgarians are a South Slavic nation and ethnic group native to Bulgaria and neighbouring regions. Emigration has resulted in immigrant communities in a number of other countries.-History and ethnogenesis:...
General who fought in the Russo-Turkish War (1877–1878), Serbo-Bulgarian War
Serbo-Bulgarian War
The Serbo-Bulgarian War was a war between Serbia and Bulgaria that erupted on 14 November 1885 and lasted until 28 November the same year. Final peace was signed on 19 February 1886 in Bucharest...
(1885), Balkan Wars
Balkan Wars
The Balkan Wars were two conflicts that took place in the Balkans in south-eastern Europe in 1912 and 1913.By the early 20th century, Montenegro, Bulgaria, Greece and Serbia, the countries of the Balkan League, had achieved their independence from the Ottoman Empire, but large parts of their ethnic...
(1912–1913) and First World War (1914–1918).

At the age of 19 he volunteered in the Bulgarian Corps (Opalchentsi
Opalchentsi
Opalchentsi were Bulgarian voluntary army units, who took part in the Serbo-Turkish War of 1876 and the Russo-Turkish War of 1877–1878. The people in these units were called opalchenets-pobornik meaning "volunteer combatant"....
) during the Russo-Turkish Liberation War. After the liberation he graduated the first course of the Military School in Sofia (1879). In 1882 he entered the Sankt Peterburg Academy but could not graduate it because he returned for the Unification of Bulgaria in 1885 and took part in the war that followed immediately after it. During the war against Serbia
Serbia
Serbia , officially the Republic of Serbia , is a landlocked country located at the crossroads of Central and Southeast Europe, covering the southern part of the Carpathian basin and the central part of the Balkans...
he commanded a unit which fought successfully against the enemy in the area of Vidin
Vidin
Vidin is a port town on the southern bank of the Danube in northwestern Bulgaria. It is close to the borders with Serbia and Romania, and is also the administrative centre of Vidin Province, as well as of the Metropolitan of Vidin...
and Kula
Kula, Bulgaria
Kula is a town in northwestern Bulgaria. It is the administrative centre of Kula Municipality part of Vidin Province. Located just east of the Serbian-Bulgarian border, it is the third largest town in the province after Vidin and Belogradchik. Kula lies 30 kilometres west of Vidin and 13...
.

After the war he participated in the dethroning of Alexander I and was dismissed from the Army in 1886 but only a year later he returned in office. On 13 August 1887 we was promoted a Major
Major
Major is a rank of commissioned officer, with corresponding ranks existing in almost every military in the world.When used unhyphenated, in conjunction with no other indicator of rank, the term refers to the rank just senior to that of an Army captain and just below the rank of lieutenant colonel. ...
and on 1 January 1896 Todorov became a Colonel
Colonel
Colonel , abbreviated Col or COL, is a military rank of a senior commissioned officer. It or a corresponding rank exists in most armies and in many air forces; the naval equivalent rank is generally "Captain". It is also used in some police forces and other paramilitary rank structures...
. He served in the Military School and as a chief of the Sevlievo
Sevlievo
Sevlievo is a town in north-central Bulgaria, part of Gabrovo Province. Sevlievo is known as one of the wealthiest towns in Bulgaria owing to the well developed local economy, high employment rate and major foreign investments, such as the American Standard Companies factory...
garrison. On 1 January 1910 he was promoted Major General
Major General
Major general or major-general is a military rank used in many countries. It is derived from the older rank of sergeant major general. A major general is a high-ranking officer, normally subordinate to the rank of lieutenant general and senior to the ranks of brigadier and brigadier general...
and a commander of the Seventh Rila Infantry Division.

During the First Balkan War
First Balkan War
The First Balkan War, which lasted from October 1912 to May 1913, pitted the Balkan League against the Ottoman Empire. The combined armies of the Balkan states overcame the numerically inferior and strategically disadvantaged Ottoman armies and achieved rapid success...
(1912–1913) as a commander of the Seventh Rila Infantry Division he advanced towards Solun
Thessaloniki
Thessaloniki , historically also known as Thessalonica, Salonika or Salonica, is the second-largest city in Greece and the capital of the region of Central Macedonia as well as the capital of the Decentralized Administration of Macedonia and Thrace...
and on 26 January 1913 he defeated the Ottomans in the battle of Bulair
Battle of Bulair
The battle of Bulair took place on 26 January 1913 between the Bulgarian Seventh Rila Infantry Division under General Georgi Todorov and the Ottoman 27th Infantry Division. The result was a Bulgarian victory.- Origins :...
.

During the Second Balkan War
Second Balkan War
The Second Balkan War was a conflict which broke out when Bulgaria, dissatisfied with its share of the spoils of the First Balkan War, attacked its former allies, Serbia and Greece, on 29 June 1913. Bulgaria had a prewar agreement about the division of region of Macedonia...
(1913) he and his division participated in the battle of Kalimantsi
Battle of Kalimantsi
The Battle of Kalimanci was fought between Kingdom of Serbia and Kingdom of Bulgaria during the Second Balkan War. The battle started on the 18th and ended on the 19th of July 1913. The Bulgarian Army halted the Serbian Army from pushing them out of Macedonia and joining up the Greek Army at the...
where the Serbs
Serbs
The Serbs are a South Slavic ethnic group of the Balkans and southern Central Europe. Serbs are located mainly in Serbia, Montenegro and Bosnia and Herzegovina, and form a sizable minority in Croatia, the Republic of Macedonia and Slovenia. Likewise, Serbs are an officially recognized minority in...
were defeated.

After the accession of Bulgaria
Bulgaria
Bulgaria , officially the Republic of Bulgaria , is a parliamentary democracy within a unitary constitutional republic in Southeast Europe. The country borders Romania to the north, Serbia and Macedonia to the west, Greece and Turkey to the south, as well as the Black Sea to the east...
in the First World War he commanded the 2nd Army. He led the operations in Macedonia
Macedonian front (World War I)
The Macedonian Front resulted from an attempt by the Allied Powers to aid Serbia, in the autumn of 1915, against the combined attack of Germany, Austria-Hungary and Bulgaria. The expedition came too late and in insufficient force to prevent the fall of Serbia, and was complicated by the internal...
which ended with the defeat of the Serbs in the battle of Ovche Pole
Battle of Ovche Pole
The Ovche Pole Offensive Operation was an operation of the Bulgarian Army that occurred between 14 October 1915 and 15 November 1915 as part of the Serbian Campaign...
. With that success the Bulgarians did not allow the meeting of the Serbian Army and the Anglo-French
France
The French Republic , The French Republic , The French Republic , (commonly known as France , is a unitary semi-presidential republic in Western Europe with several overseas territories and islands located on other continents and in the Indian, Pacific, and Atlantic oceans. Metropolitan France...
forces who embarked in Solun. In February 1917 he was in command of the 3rd Army and defeat the Romanians
Romanians
The Romanians are an ethnic group native to Romania, who speak Romanian; they are the majority inhabitants of Romania....
in Dobrudzha. From 8 September 1918 the became commander-in-chief of the Bulgarian Army after the illness of General Nikola Zhekov
Nikola Zhekov
Nikola Todorov Zhekov was the Minister of War of Bulgaria in 1915 and served as Commander-in-Chief from 1915 to 1918 during World War I.-Biography:...
. He participated in the battle of Dobro Pole
Battle of Dobro Pole
The Battle of Dobro Pole was a World War I battle, fought on 15 September 1918. The battle resulted in a decisive Entente victory, with a defeated Bulgaria left to sign an armistice, which removed it from World War I....
. He was dismissed in 1919.