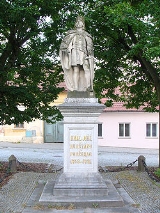 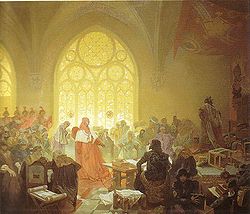 George of Kunštát
Kunštát
Kunštát is a town in the South Moravian Region of the Czech Republic. It has around 2,600 inhabitants.Villages Hluboké u Kunštátu, Rudka, Sychotín, Touboř and Újezd are administrative parts of Kunštát....
and Poděbrady
Podebrady
Poděbrady is a historical spa town in the Central Bohemian Region, Czech Republic. It lies on the river Labe 50 km east of Prague on the D11 highway. A historic milestone in the life of the town was the year 1905, when it was visited by the German estate owner Prince von Bülow...
(23 April 1420 – 22 March 1471), also known as Poděbrad or Podiebrad , was King of Bohemia
Bohemia
Bohemia is a historical region in central Europe, occupying the western two-thirds of the traditional Czech Lands. It is located in the contemporary Czech Republic with its capital in Prague...
(1458–1471). He was leader of the Hussite
Hussite
The Hussites were a Christian movement following the teachings of Czech reformer Jan Hus , who became one of the forerunners of the Protestant Reformation...
s.

George was the son of Victor of Kunštát and Poděbrady
Victor of Kunštát and Poděbrady
Victor of Kunštát and Poděbrady was a Bohemian-Moravian nobleman and a member of the House of Poděbrady...
, a Bohemian nobleman, one of the leaders of the Orphans
Sirotčí
Sirotčí , was a radical wing of the followers of Hussites. The association, founded in 1423 consisted mostly of city nobles, who joined with Jan Zizka and joined the East Bohemian Hussites, the so-called Orebites. From 1428, they were led by the priest Andreas Prokop...
or Utraquists, the more moderate faction of the Hussites during the Hussite Wars
Hussite Wars
The Hussite Wars, also called the Bohemian Wars involved the military actions against and amongst the followers of Jan Hus in Bohemia in the period 1419 to circa 1434. The Hussite Wars were notable for the extensive use of early hand-held gunpowder weapons such as hand cannons...
. At the age of fourteen, George himself took part in the Battle of Lipany
Battle of Lipany
The Battle of Lipany or Lipan, also called the Battle of Česky Brod, was fought at Lipany 40 km east of Prague on 30 May 1434 and virtually ended the Hussite Wars...
, which marked the downfall of the more radical Taborites.

Early in life, as one of the leaders of the Hussite
Hussite
The Hussites were a Christian movement following the teachings of Czech reformer Jan Hus , who became one of the forerunners of the Protestant Reformation...
party, he defeated the Austria
Austria
Austria , officially the Republic of Austria , is a landlocked country of roughly 8.4 million people in Central Europe. It is bordered by the Czech Republic and Germany to the north, Slovakia and Hungary to the east, Slovenia and Italy to the south, and Switzerland and Liechtenstein to the...
n troops of the King Albert II, who had succeeded King Sigismund
Sigismund, Holy Roman Emperor
Sigismund of Luxemburg KG was King of Hungary, of Croatia from 1387 to 1437, of Bohemia from 1419, and Holy Roman Emperor for four years from 1433 until 1437, the last Emperor of the House of Luxemburg. He was also King of Italy from 1431, and of Germany from 1411...
as King of Bohemia, Germany and Hungary. George soon became a prominent member of the Hussite party, and after the death of Hynek Ptáček of Pirkstein
Hynek Ptáček of Pirkstein
Hynek Ptáček of Pirkstein was a Bohemian Nobleman, the highest Hofmeister and Münzmeister of Bohemia and regent of Bohemia's royal cities.- Life :...
its leader.

King Albert was succeeded by his posthumously born son Ladislaus, during whose reign Bohemia was divided into two parties: the party faithful to Rome, led by Oldřich of Rosenberg (1403–1462), and the Hussite party, led by George.

After various attempts at reconciliation, George sought a military decision. He gradually raised an armed force in north-eastern Bohemia, where the Hussites were strong and where his ancestral castle Litice
Litice nad Orlicí
This article is about village Litice nad Orlicí which is part od municipality Záchlumí. For information about castle Litice, see Litice ...
was situated. In 1448, he marched this army, about 9000 strong, from Kutná Hora
Kutná Hora
Kutná Hora is a city in Bohemia, now the Czech Republic in the Central Bohemian Region.-History:The town began in 1142 with the settlement of the first Cistercian Monastery in Bohemia, Kloster Sedlitz, brought from the Imperial immediate Cistercian Waldsassen Abbey...
to Prague
Prague
Prague is the capital and largest city of the Czech Republic. Situated in the north-west of the country on the Vltava river, the city is home to about 1.3 million people, while its metropolitan area is estimated to have a population of over 2.3 million...
, and obtained possession of the capital almost without resistance.

Civil war, however, broke out, but George succeeded in defeating the nobles who remained faithful to Rome. In 1451 the emperor Frederick III
Frederick III, Holy Roman Emperor
Frederick the Peaceful KG was Duke of Austria as Frederick V from 1424, the successor of Albert II as German King as Frederick IV from 1440, and Holy Roman Emperor as Frederick III from 1452...
, as guardian of the young king Ladislaus, entrusted Poděbrad with the administration of Bohemia. In the same year a diet assembled at Prague also conferred the regency on George.

The struggle of the Hussites against the papal party continued uninterruptedly, and the position of George became a very difficult one when the young king Ladislaus, who was crowned in 1453, expressed his pro-Roman sympathies, though he had recognized the compacts and the ancient privileges of Bohemia. In 1457 King Ladislaus died suddenly and some voices accused George of having poisoned him. (Research in 1985 gave acute leukemia
Acute leukemia
Acute leukemia or acute leukaemia is a generic term used to describe a family of serious medical conditions relating to an original diagnosis of leukemia...
as the cause of death.)

On 27 February 1458 the estates
Estates of the realm
The Estates of the realm were the broad social orders of the hierarchically conceived society, recognized in the Middle Ages and Early Modern period in Christian Europe; they are sometimes distinguished as the three estates: the clergy, the nobility, and commoners, and are often referred to by...
of Bohemia unanimously chose George as king. Even the adherents of the papal party voted for him, some in honour of his moderate policies, some out of deference to popular feeling, which opposed the election of a foreign ruler.

George attempted to rule in a moderate manner based on the Compacta of Prague. He won the loyalty of some Catholics, but had to contend with the opposition of Pius II
Pope Pius II
Pope Pius II, born Enea Silvio Piccolomini was Pope from August 19, 1458 until his death in 1464. Pius II was born at Corsignano in the Sienese territory of a noble but decayed family...
, which proved one of the most serious obstacles to Poděbrad's rule. Pius declared the Compacta null and void in 1462 and wished George to consent to this. George rejected this demand but endeavoured to curry favour with the Roman See by punishing the more extreme Hussites.

George attempted to secure peace with Rome by a radical suggestion, which some consider to have been a proposal before its time of a European Union. He proposed a treaty among all Christian powers, with Germany (then including Bohemia), France, and Italy and its princes the founding members, but others, especially the Hispanic powers, joining later. The member states would pledge to settle all differences by exclusively peaceful means. There was to be a common parliament and other common institutions and supranational insignia. George couched the proposal in Christian terms ("Europe" is not explicitly mentioned) as a way to stop the "abominable Turk" who had conquered Constantinople in 1453. He sent Leo of Rozmital
Leo of Rozmital
Zdeniek Lev Lord of Rosental aka Zdeniek Lev von Rosental was a Bohemian noble, royal ambassador, judge and the Highest Burgrave of Prague....
on a tour of European courts with a draft treaty of The message of peace
Treaty on the Establishment of Peace throughout Christendom
The Tractatus pacis toti Christianitati fiendae, or Treaty on the Establishment of Peace throughout Christendom, was the unsuccessful project of universal peace initiated by King George of Bohemia in the 15th century. For its realization, serious diplomatic negotiations took place among European...
to promote this idea. George hoped that the treaty would come into effect in 1464.

That did not happen. All George's endeavours to establish peace with Rome proved ineffectual, although Pius II's plan of a crusade against Bohemia remained unexecuted.

After Pius' death in 1464, George attempted to negotiate with the new Pope, Paul II
Pope Paul II
Pope Paul II , born Pietro Barbo, was pope from 1464 until his death in 1471.- Early life :He was born in Venice, and was a nephew of Pope Eugene IV , through his mother. His adoption of the spiritual career, after having been trained as a merchant, was prompted by his uncle's election as pope...
but Paul proved to be an equally determined opponent.

George made enemies among the nobles of the papal party, who assembled at Zelená Hora (Grüneberg) on 28 November 1465 to voice their grievances and conclude an alliance against the king. This alliance was from the outset supported by Pope Paul II and on 23 December 1466 the Pope excommunicated George and pronounced his deposition as king of Bohemia, releasing all subjects of the Bohemian crown from their oaths of allegiance to George. Emperor Frederick III, and King Matthias of Hungary
Matthias Corvinus of Hungary
Matthias Corvinus , also called the Just in folk tales, was King of Hungary and Croatia from 1458, at the age of 14 until his death...
, George's former ally, joined the insurgent Bohemian nobles. King Matthias conquered a large part of Moravia
Moravia
Moravia is a historical region in Central Europe in the east of the Czech Republic, and one of the former Czech lands, together with Bohemia and Silesia. It takes its name from the Morava River which rises in the northwest of the region...
, and was crowned King by the papal party in the Moravian ecclesiastical metropolis Olomouc
Olomouc
Olomouc is a city in Moravia, in the east of the Czech Republic. The city is located on the Morava river and is the ecclesiastical metropolis and historical capital city of Moravia. Nowadays, it is an administrative centre of the Olomouc Region and sixth largest city in the Czech Republic...
, as king of Bohemia on 3 May 1469.

George was successful against Matthias but, contrary to the wishes of his followers, came to an agreement with the Hungarian king in 1470.

He died on 22 March 1471 and his followers chose Vladislaus II
Vladislaus II of Bohemia and Hungary
Vladislaus II, also known as Ladislaus Jagiellon ; was King of Bohemia from 1471 and King of Hungary from 1490 until his death in 1516...
, the son of the Polish King, as his successor to continue the fight against Matthias.

After Kunigunde died in 1449, he remarried to Johana of Rožmitál in 1450, they had the following children: