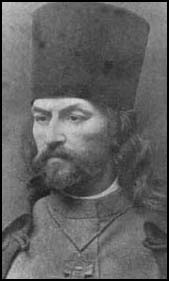 Georgiy Apollonovich Gapon was a Russian Orthodox
Russian Orthodox Church
The Russian Orthodox Church or, alternatively, the Moscow Patriarchate The ROC is often said to be the largest of the Eastern Orthodox churches in the world; including all the autocephalous churches under its umbrella, its adherents number over 150 million worldwide—about half of the 300 million...
priest
Priest
A priest is a person authorized to perform the sacred rites of a religion, especially as a mediatory agent between humans and deities. They also have the authority or power to administer religious rites; in particular, rites of sacrifice to, and propitiation of, a deity or deities...
and a popular working class
Working class
Working class is a term used in the social sciences and in ordinary conversation to describe those employed in lower tier jobs , often extending to those in unemployment or otherwise possessing below-average incomes...
leader before the Russian Revolution of 1905
Russian Revolution of 1905
The 1905 Russian Revolution was a wave of mass political and social unrest that spread through vast areas of the Russian Empire. Some of it was directed against the government, while some was undirected. It included worker strikes, peasant unrest, and military mutinies...
.

Father Gapon organized the Assembly of Russian Factory and Mill Workers of St. Petersburg, which was patronized by the Department of the Police and the St. Petersburg Okhrana (secret police
Secret police
Secret police are a police agency which operates in secrecy and beyond the law to protect the political power of an individual dictator or an authoritarian political regime....
). The Assembly's objectives were to defend workers' rights and to elevate their moral and religious status. Only persons of Russian Orthodox denomination were eligible to join its ranks. Soon the organization had twelve branches and 8,000 members, and Gapon tried to expand activities to Kiev
Kiev
Kiev or Kyiv is the capital and the largest city of Ukraine, located in the north central part of the country on the Dnieper River. The population as of the 2001 census was 2,611,300. However, higher numbers have been cited in the press....
and Moscow
Moscow
Moscow is the capital, the most populous city, and the most populous federal subject of Russia. The city is a major political, economic, cultural, scientific, religious, financial, educational, and transportation centre of Russia and the continent...
. Gapon was not simply an obedient instrument of the police; cooperating with them, he tried to realize his own plans.

From the end of 1904, Gapon started to cooperate with radicals, who had championed the abolition of the Tsar's autocracy
Autocracy
An autocracy is a form of government in which one person is the supreme power within the state. It is derived from the Greek : and , and may be translated as "one who rules by himself". It is distinct from oligarchy and democracy...
.

On , the day after the general strike burst out in St. Petersburg, Gapon organized a workers' procession to present a petition to the Czar, which ended tragically (Bloody Sunday 1905). Gapon's life was saved by Pinchas Rutenberg, who took Gapon away from gun fire.

Following the Bloody Sunday, Gapon anathematized the Tsar and called upon the workers to take action against the regime, but soon after escaped abroad, where he had close ties with the Socialist-Revolutionary Party
Socialist-Revolutionary Party
thumb|right|200px|Socialist-Revolutionary election poster, 1917. The caption in red reads "партия соц-рев" , short for Party of the Socialist Revolutionaries...
. Gapon and Rutenberg fled abroad, being welcomed in Europe both by prominent Russian emigrants Georgy Plekhanov, Vladimir Lenin
Vladimir Lenin
Vladimir Ilyich Lenin was a Russian Marxist revolutionary and communist politician who led the October Revolution of 1917. As leader of the Bolsheviks, he headed the Soviet state during its initial years , as it fought to establish control of Russia in the Russian Civil War and worked to create a...
, Pyotr Kropotkin, and French socialist leaders Jean Jaurès
Jean Jaurès
Jean Léon Jaurès was a French Socialist leader. Initially an Opportunist Republican, he evolved into one of the first social democrats, becoming the leader, in 1902, of the French Socialist Party, which opposed Jules Guesde's revolutionary Socialist Party of France. Both parties merged in 1905 in...
and Georges Clemenceau
Georges Clemenceau
Georges Benjamin Clemenceau was a French statesman, physician and journalist. He served as the Prime Minister of France from 1906 to 1909, and again from 1917 to 1920. For nearly the final year of World War I he led France, and was one of the major voices behind the Treaty of Versailles at the...
. He found sanctuary in Geneva
Geneva
Geneva In the national languages of Switzerland the city is known as Genf , Ginevra and Genevra is the second-most-populous city in Switzerland and is the most populous city of Romandie, the French-speaking part of Switzerland...
and in London at 33 Dunstan House, Stepney
Stepney
Stepney is a district of the London Borough of Tower Hamlets in London's East End that grew out of a medieval village around St Dunstan's church and the 15th century ribbon development of Mile End Road...
, with anarchists Peter Kropotkin
Peter Kropotkin
Prince Pyotr Alexeyevich Kropotkin was a Russian zoologist, evolutionary theorist, philosopher, economist, geographer, author and one of the world's foremost anarcho-communists. Kropotkin advocated a communist society free from central government and based on voluntary associations between...
and Rudolf Rocker
Rudolf Rocker
Johann Rudolf Rocker was an anarcho-syndicalist writer and activist. A self-professed anarchist without adjectives, Rocker believed that anarchist schools of thought represented "only different methods of economy" and that the first objective for anarchists was "to secure the personal and social...
. After the October Manifesto
October Manifesto
The October Manifesto was issued on 17 October, 1905 by Tsar Nicholas II of Russia under the influence of Count Sergei Witte as a response to the Russian Revolution of 1905....
, before the end of 1905, Gapon returned to Russia and resumed contact with the Okhrana.


Suspected as an agent provocateur 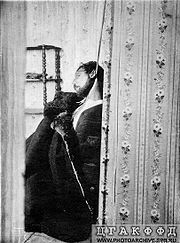 Gapon soon revealed to Rutenberg his contacts with the police and tried to recruit him, too, reasoning that double loyalty is helpful to the workers' cause. However, Rutenberg reported this provocation to his party leaders, Yevno Azef (who was himself a secret police spy) and Boris Savinkov
Boris Savinkov
Boris Viktorovich Savinkov was a Russian writer and revolutionary terrorist...
. On March 26, 1906 Gapon arrived to meet Rutenberg in the rented cottage out of St. Petersburg, and after a month he was found there hanged. Rutenberg asserted later that Gapon was condemned by the comrades' court. In reality, three S.R. party combatants overheard their conversation from the next room. After Gapon had repeated his collaboration proposal, Rutenberg called the comrades into the room and left. When he returned, Gapon was dead.

He was portrayed by Julian Glover
Julian Glover
Julian Wyatt Glover is a British actor best known for such roles as General Maximilian Veers in Star Wars Episode V: The Empire Strikes Back, the Bond villain Aristotle Kristatos in For Your Eyes Only, and Walter Donovan in Indiana Jones and the Last Crusade.-Personal life:Glover was born in...
in the 1971 film Nicholas and Alexandra
Nicholas and Alexandra
Nicholas and Alexandra is a 1971 biographical film which tells the story of the last Russian monarch, Tsar Nicholas II of Russia, and his wife, Tsarina Alexandra....
and by Kenneth Colley
Kenneth Colley
Kenneth Colley is an English actor. A long-time character actor, he came to wider prominence through his role as Admiral Piett in Star Wars Episode V: The Empire Strikes Back and Star Wars Episode VI: Return of the Jedi....
in the 1974 miniseries Fall of Eagles
Fall of Eagles
Fall of Eagles is a 13-part British television drama aired by the BBC in 1974. The series was created by John Elliot and produced by Stuart Burge....
. Coincidentally, both men would later play imperial officers in The Empire Strikes Back.