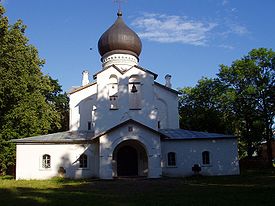 Gdov is a town and the administrative center of Gdovsky District
Gdovsky District
Gdovsky District is an administrative and municipal district , one of the 24 in Pskov Oblast, Russia....
of Pskov Oblast
Pskov Oblast
Pskov Oblast is a federal subject of Russia . Pskov Oblast borders the countries of Estonia and Latvia, as well as Belarus. It is the westernmost federal subject of contiguous Russia . Its major cities are the administrative center Pskov and Velikiye Luki . Area: 55,300 km²...
, Russia
Russia
Russia or , officially known as both Russia and the Russian Federation , is a country in northern Eurasia. It is a federal semi-presidential republic, comprising 83 federal subjects...
, situated on the Gdovka River, just 2 kilometres (1.2 mi) from its outflow into Lake Peipus
Lake Peipus
Lake Peipus, ) is the biggest transboundary lake in Europe on the border between Estonia and Russia.The lake is the fifth largest in Europe after Lake Ladoga and Lake Onega in Russia north of St...
. Population:

Gdov was founded in the 14th century, as an outpost guarding the city of Pskov
Pskov
Pskov is an ancient city and the administrative center of Pskov Oblast, Russia, located in the northwest of Russia about east from the Estonian border, on the Velikaya River. Population: -Early history:...
. Between 1431 and 1434, Pskovians built a fortress
Gdov Kremlin
The Gdov Kremlin is located on a bank of the Gdovka River, overlooking the Russian town of Gdov.- Origin :Gdov was established as an outpost of the Pskov Republic. It occupied a strategically important position, being close to Lake Peipus, separating Livonia and Rus. Located on an important road...
there, the remains of which can still be seen. It was attacked on numerous occasions by Swedes
Sweden
Sweden , officially the Kingdom of Sweden , is a Nordic country on the Scandinavian Peninsula in Northern Europe. Sweden borders with Norway and Finland and is connected to Denmark by a bridge-tunnel across the Öresund....
and Poles
Poland
Poland , officially the Republic of Poland , is a country in Central Europe bordered by Germany to the west; the Czech Republic and Slovakia to the south; Ukraine, Belarus and Lithuania to the east; and the Baltic Sea and Kaliningrad Oblast, a Russian exclave, to the north...
(e.g., during the Russo–Swedish War (1590–1595) and Ingrian War
Ingrian War
The Ingrian War between Sweden and Russia, which lasted between 1610 and 1617 and can be seen as part of Russia's Time of Troubles, is mainly remembered for the attempt to put a Swedish duke on the Russian throne...
), but was finally returned to Russia in 1617.

In 1780, Gdov was granted town status; its coat of arms
Coat of arms
A coat of arms is a unique heraldic design on a shield or escutcheon or on a surcoat or tabard used to cover and protect armour and to identify the wearer. Thus the term is often stated as "coat-armour", because it was anciently displayed on the front of a coat of cloth...
was granted on May 28, 1781. Between 1874 and 1912, Gdov issued Zemstvo stamp
Zemstvo stamp
A Zemstvo stamp was a Russian local stamp used widely in rural areas from 1865. It was named after the Zemstvo local administrative districts created in 1864. The stamps ceased at about the time of the 1917 Russian revolution.- Background :...
s. The first stamp, worth two kopeck
Russian ruble
The ruble or rouble is the currency of the Russian Federation and the two partially recognized republics of Abkhazia and South Ossetia. Formerly, the ruble was also the currency of the Russian Empire and the Soviet Union prior to their breakups. Belarus and Transnistria also use currencies with...
s, appeared on April 16, 1874. Stamp production ceased, however, with the coming of World War I
World War I
World War I , which was predominantly called the World War or the Great War from its occurrence until 1939, and the First World War or World War I thereafter, was a major war centred in Europe that began on 28 July 1914 and lasted until 11 November 1918...
. On May 1919, the Northern Army, under General Rodzianko, captured Gdov, along with Pskov and Yamburg.

In 1944, the Wehrmacht
Wehrmacht
The Wehrmacht – from , to defend and , the might/power) were the unified armed forces of Nazi Germany from 1935 to 1945. It consisted of the Heer , the Kriegsmarine and the Luftwaffe .-Origin and use of the term:...
deliberately destroyed Gdov's churches, which have been ranked among the loveliest specimens of Pskovian medieval architecture. The town's historic monuments have been partly restored after World War II
World War II
World War II, or the Second World War , was a global conflict lasting from 1939 to 1945, involving most of the world's nations—including all of the great powers—eventually forming two opposing military alliances: the Allies and the Axis...
.