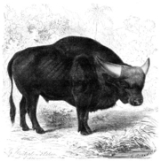 Encyclopedia
Gayal or mithun is the domestic
Domestication
Domestication or taming is the process whereby a population of animals or plants, through a process of selection, becomes accustomed to human provision and control. In the Convention on Biological Diversity a domesticated species is defined as a 'species in which the evolutionary process has been...
gaur
Gaur
The gaur , also called Indian bison, is a large bovine native to South Asia and Southeast Asia. The species is listed as vulnerable on the IUCN Red List since 1986 as the population decline in parts of the species' range is likely to be well over 70% over the last three generations...
, probably a gaur-cattle
Cattle
Cattle are the most common type of large domesticated ungulates. They are a prominent modern member of the subfamily Bovinae, are the most widespread species of the genus Bos, and are most commonly classified collectively as Bos primigenius...
hybrid breed.

In his first description of 1804, Aylmer Bourke Lambert
Aylmer Bourke Lambert
Aylmer Bourke Lambert was a British botanist, one of the first fellows of the Linnean Society.He is best known for his work A description of the genus Pinus, issued in several parts 1803-1824, a sumptuously illustrated folio volume detailing all of the conifers then known...
applied the binomial
Binomial nomenclature
Binomial nomenclature is a formal system of naming species of living things by giving each a name composed of two parts, both of which use Latin grammatical forms, although they can be based on words from other languages...
Bos frontalis to a domestic specimen probably from Chittagong
Chittagong
Chittagong ) is a city in southeastern Bangladesh and the capital of an eponymous district and division. Built on the banks of the Karnaphuli River, the city is home to Bangladesh's busiest seaport and has a population of over 4.5 million, making it the second largest city in the country.A trading...
.

In 2003, the International Commission on Zoological Nomenclature
International Commission on Zoological Nomenclature
The International Commission on Zoological Nomenclature is an organization dedicated to "achieving stability and sense in the scientific naming of animals". Founded in 1895, it currently comprises 28 members from 20 countries, mainly practicing zoological taxonomists...
has fixed the first available
specific name based on a wild population that the name for this wild species is valid by virtue of its being antedated by a name based on a domestic form. Most authors have adopted the binomial Bos frontalis for the domestic species as valid for the taxon
Taxon
|thumb|270px|[[African elephants]] form a widely-accepted taxon, the [[genus]] LoxodontaA taxon is a group of organisms, which a taxonomist adjudges to be a unit. Usually a taxon is given a name and a rank, although neither is a requirement...
.

To the Adi people
Adi people
The Adi, or Bangni-Bokar Lhoba people is a major collective tribe living in the Himalayan hills of Arunachal Pradesh, and they are found in the temperate and sub-tropical regions within the districts of East Siang, Upper Siang, West Siang and Dibang Valley. The older term Abor is a deprecated...
(Bangni-Bokar Lhoba
Lhoba
Lhoba is a term of obscure origin which has come to apply to a diverse amalgamation of Tibeto-Burman tribespeople living in and around "Pemako" , including Mainling, Medog, Zayü counties of Nyingchi Prefecture and Lhünzê County of Shannan Prefecture...
s), the possession of gaur is the traditional measure of a family's wealth. In the Adi language, gaur are called tadok and in Apatani and Nishi called subu often referred to as mithun. Gaur are not milked or put to work but given supplementary care while grazing in the woods, until they are slaughtered in ritual or for the local consumption.

The gaur, or mithun as it is commonly known in the northeast region of India
India
India , officially the Republic of India , is a country in South Asia. It is the seventh-largest country by geographical area, the second-most populous country with over 1.2 billion people, and the most populous democracy in the world...
, is the state animal of Arunachal Pradesh
Arunachal Pradesh
Arunachal Pradesh is a state of India, located in the far northeast. It borders the states of Assam and Nagaland to the south, and shares international borders with Burma in the east, Bhutan in the west, and the People's Republic of China in the north. The majority of the territory is claimed by...
and Nagaland
Nagaland
Nagaland is a state in the far north-eastern part of India. It borders the state of Assam to the west, Arunachal Pradesh and part of Assam to the north, Burma to the east and Manipur to the south. The state capital is Kohima, and the largest city is Dimapur...
.
The source of this article is wikipedia, the free encyclopedia.  The text of this article is licensed under the GFDL.