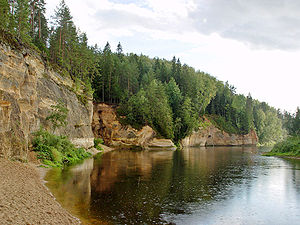 The Gauja is one of the longest river
River
A river is a natural watercourse, usually freshwater, flowing towards an ocean, a lake, a sea, or another river. In a few cases, a river simply flows into the ground or dries up completely before reaching another body of water. Small rivers may also be called by several other names, including...
s in Latvia
Latvia
Latvia , officially the Republic of Latvia , is a country in the Baltic region of Northern Europe. It is bordered to the north by Estonia , to the south by Lithuania , to the east by the Russian Federation , to the southeast by Belarus and shares maritime borders to the west with Sweden...
, with a length of 452 kilometres (280.9 mi) and a catchment area of 8900 square kilometres (3,436.3 sq mi). Its source is in the hills southeast of Cēsis
Cesis
Cēsis , is a town in Latvia located in the northern part of the Central Vidzeme Upland. Cēsis is on the Gauja River valley, and is built on a series of ridges above the river overlooking the woods below...
. It first flows east and north and forms the border with Estonia
Estonia
Estonia , officially the Republic of Estonia , is a state in the Baltic region of Northern Europe. It is bordered to the north by the Gulf of Finland, to the west by the Baltic Sea, to the south by Latvia , and to the east by Lake Peipsi and the Russian Federation . Across the Baltic Sea lies...
for about 20 kilometres (12.4 mi). South of Valga and Valka
Valka
Valka is a town in northern Latvia, on the border with Estonia.Valka and the Estonian town Valga are twins, separated by the Estonian/Latvian border but using the slogan "One Town, Two States". The border dividing the Livonian town of Walk was marked out in 1920 by an international jury headed by...
, it turns west towards Valmiera
Valmiera
Valmiera is the largest city of the historical Vidzeme region, Latvia, with a total area of 18.1 km². It is the center of the Valmiera District. As of 2002, Valmiera had a population of 27,323, and in 2008 – 27,569....
, continuing southwest near Cēsis and Sigulda
Sigulda
Other twinnings: Keila, Estonia chiatura Georgia-References:* , , , , , and -External links:*...
. The Gauja flows into the Baltic Sea
Baltic Sea
The Baltic Sea is a brackish mediterranean sea located in Northern Europe, from 53°N to 66°N latitude and from 20°E to 26°E longitude. It is bounded by the Scandinavian Peninsula, the mainland of Europe, and the Danish islands. It drains into the Kattegat by way of the Øresund, the Great Belt and...
northeast of Riga
Riga
Riga is the capital and largest city of Latvia. With 702,891 inhabitants Riga is the largest city of the Baltic states, one of the largest cities in Northern Europe and home to more than one third of Latvia's population. The city is an important seaport and a major industrial, commercial,...
.

In Cesis district
Cesis District
Cēsis District was an administrative division of Latvia, located in the Vidzeme region, in the country's north-east. It bordered the former districts of Valmiera and Valka to the north, Limbaži and Riga to the west, Gulbene to the east, Ogre and Madona to the south. It was organized into two...
and Riga district
Riga District
Riga District was an administrative division of Latvia, located in Semigallia and Vidzeme regions, in the centre of the country. The district had the two cities of Riga and Jūrmala with the Gulf of Riga to the north. Beginning from the west and counterclockwise to the east, Riga District had...
the Gauja has shaped the deepest river valley in Latvia with banks up to 90 metres (295.3 ft) high . This part of the Gauja valley contains numerous natural and cultural landmarks and was declared a national park (Gauja National Park
Gauja National Park
The Gauja National Park in Vidzeme is the largest national park in Latvia, with an area of 917.45 km² running from north-east of Sigulda to south-west of Cēsis along the valley of the Gauja River, from which the park takes its name. It was established on 14 September 1973 and is thus also the...
) in 1973.

The Latvian-born explorer Aleksandrs Laime
Aleksandrs Laime
Aleksandrs Laime was a famous Latvian-born explorer. He is most noted for being the first recorded human to reach Angel Falls, located in Venezuela, by foot...
gave the name Gauja to the river that feeds Angel Falls in Venezuela
Venezuela
Venezuela , officially called the Bolivarian Republic of Venezuela , is a tropical country on the northern coast of South America. It borders Colombia to the west, Guyana to the east, and Brazil to the south...
.
The source of this article is wikipedia, the free encyclopedia.  The text of this article is licensed under the GFDL.