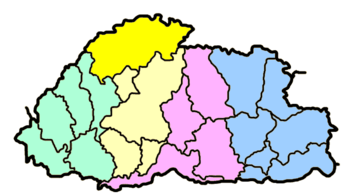 Gasa District or Gasa Dzongkhag (Dzongkha: མགར་ས་རྫོང་ཁག་; Wylie
Wylie transliteration
The Wylie transliteration scheme is a method for transliterating Tibetan script using only the letters available on a typical English language typewriter. It bears the name of Turrell V. Wylie, who described the scheme in an article, A Standard System of Tibetan Transcription, published in 1959...
: Mgar-sa rdzong-khag) is one of the 20 dzongkhag
Dzongkhag
A dzongkhag is an administrative and judicial district of Bhutan. The twenty dzongkhags of Bhutan are further divided into 205 gewogs. Some larger dzongkhags have one or more of an intermediate judicial division, known as dungkhags , which themselves comprise two or more gewogs...
s (districts) comprising Bhutan
Bhutan
Bhutan , officially the Kingdom of Bhutan, is a landlocked state in South Asia, located at the eastern end of the Himalayas and bordered to the south, east and west by the Republic of India and to the north by the People's Republic of China...
. Its capital is Gasa Dzong
Gasa Dzong
Gasa Dzong or Gasa Tashi Tongmön Dzong near Gasa is the administrative center of Gasa Dzongkhag in the northwestern region of Bhutan. The Dzong was built in the 17th century by Tenzin Drukdra the second Druk Desi over the site of a meditation place established by Drubthob Terkungpa in the 13th...
near Gasa
Gasa, Bhutan
Gasa is a town near Gasa Dzong in Gasa District in northwestern Bhutan.Population 3116 ....
. It is located in the far north of the county and spans the Middle and High Himalayas
Himalayas
The Himalaya Range or Himalaya Mountains Sanskrit: Devanagari: हिमालय, literally "abode of snow"), usually called the Himalayas or Himalaya for short, is a mountain range in Asia, separating the Indian subcontinent from the Tibetan Plateau...
. The dominant language of the district is Dzongkha, the national language. Related languages, Layakha and Lunanakha, are spoken by semi-nomadic communities in the north of the district.

Gasa was formerly a drungkhag (sub-district) of the Punakha
Punakha District
Punakha District is one of the 20 dzongkhags comprising Bhutan. It is bordered by Thimphu, Gasa, and Wangdue Phodrang Districts...
dzongkhag (district). It became a separate dzongkhag in 1992, the start of 7th Five Year Plan
Five-Year Plans of Bhutan
The Five Year Plans of Bhutan are a series of national economic development plans created by the government of Bhutan since 1961.The government of Bhutan has played a pervasive role in its economy and development...
.

Gasa has become a tourist destination
Tourist destination
A tourist destination is a city, town, or other area that is dependent to a significant extent on the revenues accruing from tourism. It may contain one or more tourist attractions and possibly some "tourist traps."...
because of its pristine forests and the exceptionally scenic location of its Dzong. In 2008 a massive flood on the Mo Chhu
Mo Chhu
Mo Chhu is a major river in Bhutan. The word "Chhu" means "river" or "water" in Dzongkha, the official national language in Bhutan. The river rises in Gasa Dzongkhag near the border between Bhutan and Tibet. From there, the Mo Chhu flows generally southward to Punakha in central Bhutan, where it...
(Female River) destroyed a popular hot spring complex, which is under restoration and may re-open in late 2011. The high altitude makes farming difficult, although government programs seek to establish mustard
Mustard plant
Mustards are several plant species in the genera Brassica and Sinapis whose small mustard seeds are used as a spice and, by grinding and mixing them with water, vinegar or other liquids, are turned into the condiment known as mustard or prepared mustard...
and summer vegetable planting programs. Residents herd yak
Yak
The yak, Bos grunniens or Bos mutus, is a long-haired bovine found throughout the Himalayan region of south Central Asia, the Tibetan Plateau and as far north as Mongolia and Russia. In addition to a large domestic population, there is a small, vulnerable wild yak population...
s and dzo
Dzo
A dzo is a hybrid of yak and domestic cattle. The word dzo technically refers to a male hybrid, while a female is known as a dzomo or zhom. Alternative Romanizations of the Tibetan names include zho and zo. In Mongolian it is called khainag...
s, and a small number benefit from the nascent tourism industry. A narrow dirt road was completed in December of 2010, making it possible to hike to the Dzong in less than two hours. The majority of the known herds of wild Takin
Takin
The Takin , also called cattle chamois or gnu goat, is a goat-antelope found in the Eastern Himalayas. There are four subspecies: B. taxicolor taxicolor, the Mishmi Takin; B. taxicolor bedfordi, the Shanxi or Golden Takin; B. taxicolor tibetana, the Tibetan or Sichuan Takin; and B. taxicolor...
occur in Gasa. Electricity is also being supplied to some of the gewog
Gewog
A gewog, or geog refers to a group of villages in Bhutan. Gewogs form a geographic administrative unit below dzongkhag districts , and above thromde municipalities. Bhutan comprises 205 gewogs, which average 230 km² in area...
s and all electrification programmes are expected to be complete by 2012.

Gasa is most famous for its Layap
Layap
The Layap are an indigenous people inhabiting the high mountains of northwest Bhutan in the village of Laya, in the Gasa District, at an altitude of , just below the Tsendagang peak. Layaps also live in northern Thimphu and Punakha Districts...
people, and for the Snowman Trek, one of the most challenging treks in the Himalayas.