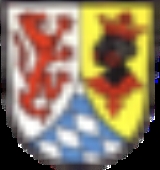 Overview
Garmisch-Partenkirchen is a district in Bavaria
Bavaria
Bavaria, formally the Free State of Bavaria is a state of Germany, located in the southeast of Germany. With an area of , it is the largest state by area, forming almost 20% of the total land area of Germany...
, Germany
Germany
Germany , officially the Federal Republic of Germany , is a federal parliamentary republic in Europe. The country consists of 16 states while the capital and largest city is Berlin. Germany covers an area of 357,021 km2 and has a largely temperate seasonal climate...
. It is bounded by (from the west and clockwise) the districts of Ostallgäu
Ostallgäu
Ostallgäu is a district in Bavaria, Germany. It is bounded by the districts of Oberallgäu, Unterallgäu, Augsburg, Landsberg, Weilheim-Schongau and Garmisch-Partenkirchen, and by the Austrian state of Tyrol...
, Weilheim-Schongau
Weilheim-Schongau
Weilheim-Schongau is a Kreis in the south of Bavaria, Germany. Neighboring districts are Landsberg, Starnberg, Bad Tölz-Wolfratshausen, Garmisch-Partenkirchen and Ostallgäu.-Geography:...
and Bad Tölz-Wolfratshausen
Bad Tölz-Wolfratshausen
Bad Tölz-Wolfratshausen is a district in Bavaria, Germany. It is bounded by Austria and the districts of Garmisch-Partenkirchen, Weilheim-Schongau, Starnberg, Munich and Miesbach.- History :...
, and by the Austria
Austria
Austria , officially the Republic of Austria , is a landlocked country of roughly 8.4 million people in Central Europe. It is bordered by the Czech Republic and Germany to the north, Slovakia and Hungary to the east, Slovenia and Italy to the south, and Switzerland and Liechtenstein to the...
n state of Tyrol
Tyrol (state)
Tyrol is a state or Bundesland, located in the west of Austria. It comprises the Austrian part of the historical region of Tyrol.The state is split into two parts–called North Tyrol and East Tyrol–by a -wide strip of land where the state of Salzburg borders directly on the Italian province of...
.
In medieval times the alpine lands were owned by the bishops of Freising and the abbots of Ettal Abbey
Ettal Abbey
Ettal Abbey is a Benedictine monastery in the village of Ettal close to Oberammergau and Garmisch-Partenkirchen in Bavaria, Germany. With a community of more than 50 monks, with another five at Wechselburg, the Abbey is one of the largest Benedictine houses and is a major attraction for...
. In 1803, when the clerical states of Germany were dissolved, the region was acquired by Bavaria.
The district is located in the Bavarian Alps
Alps
The Alps is one of the great mountain range systems of Europe, stretching from Austria and Slovenia in the east through Italy, Switzerland, Liechtenstein and Germany to France in the west....
and includes the highest mountain of Germany, the Zugspitze
Zugspitze
The Zugspitze, at 2,962 metres above sea level, is the highest peak of the Wetterstein Mountains as well as the highest mountain in Germany. It lies south of the town of Garmisch-Partenkirchen, and the border between Germany and Austria runs over its western summit. South of the mountain is...
(2962 m).

Is this a common thing in Garmisch? I'm 63 years old . Last Friday we ariived in Garmisch as tourists . I was astonished by the most unwarm and arr...
More
x