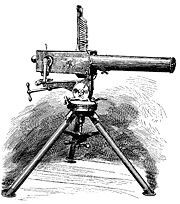 The Gardner gun was an early type of mechanical machine gun
Machine gun
A machine gun is a fully automatic mounted or portable firearm, usually designed to fire rounds in quick succession from an ammunition belt or large-capacity magazine, typically at a rate of several hundred rounds per minute....
. It had one or two barrel
Gun barrel
A gun barrel is the tube, usually metal, through which a controlled explosion or rapid expansion of gases are released in order to propel a projectile out of the end at a high velocity....
s, was fed from a vertical magazine or hopper and was operated by a crank. When the crank was turned, a feed arm positioned a cartridge
Cartridge (firearms)
A cartridge, also called a round, packages the bullet, gunpowder and primer into a single metallic case precisely made to fit the firing chamber of a firearm. The primer is a small charge of impact-sensitive chemical that may be located at the center of the case head or at its rim . Electrically...
in the breech, the bolt closed and the weapon fired. Turning the crank further opened the breechblock and extracted the spent casing.

The Gardner machine gun was invented in 1874 by William Gardner of Toledo, Ohio
Toledo, Ohio
Toledo is the fourth most populous city in the U.S. state of Ohio and is the county seat of Lucas County. Toledo is in northwest Ohio, on the western end of Lake Erie, and borders the State of Michigan...
formerly a Captain in the Union army during the American Civil War
American Civil War
The American Civil War was a civil war fought in the United States of America. In response to the election of Abraham Lincoln as President of the United States, 11 southern slave states declared their secession from the United States and formed the Confederate States of America ; the other 25...
. After producing a prototype he went to the Pratt and Whitney
Pratt & Whitney Measurement Systems
Pratt & Whitney Measurement Systems is a multinational corporation that specializes in producing high-precision measuring instruments and systems.-History:...
company, who after a year of development produced a military version of the weapon.

A demonstration to officers at the United States Navy yard in 1875 was successful, however they recommended that Pratt and Whitney continue with development of the system, incorporating improvements to the feed system, which were designed by E.G. Parkhurst, an engineer at Pratt and Whitney. The army attended the tests, but showed no interest in the weapon.

Parkhurst added many improvements to the gun's firing mechanism which made it more reliable. During 1877 additional tests took place with a .45 calibre (11.4 mm) version of the weapon, which determined its muzzle velocity to be 1,280 feet per second (390 m/s).

On 17 June 1879 a further demonstration was carried out at the Navy Yard, during which the weapon was presented by Francis A. Pratt
Francis A. Pratt
Francis Ashbury Pratt was a Connecticut mechanical engineer, inventor, and co-founder of Pratt & Whitney.Pratt was born in Peru, New York. In the early 1850s, he designed a milling machine for George S...
and Amos Whitney
Amos Whitney
Amos Whitney was a mechanical engineer and Connecticut inventor.Born in Biddeford, Maine, in 1860 he partnered with Francis Pratt to organize the Pratt & Whitney company to manufacture machine tools, tools for the makers of sewing machines, and gun making machinery for use by the Union Army...
. The weapon fired a total of 10,000 rounds during the test, taking a total elapsed time of 27 minutes 36 seconds, with breaks between firing to resolve an issue with one of the extractors. While the test was not without issues the weapon managed to fire 4,722 rounds before the first stoppage , and after the stoppage was resolved it fired approximately 5,000 rounds without incident.

On 15 January and 17 March 1880 duplicate tests were conducted at Sandy Hook
Sandy Hook
Sandy Hook is a barrier spit along the Atlantic coast of New JerseySandy Hook may also refer to:-Places:United States* Sandy Hook , a village in the town of Newtown, Connecticut* Sandy Hook, Kentucky, a city in Elliott County...
Proving ground in front of an Army review board. The weapon performed well, and they recommended that the Army buy a limited number for field evaluation, noting the low cost of the weapon. However the Army declined to purchase.

At this point, the British Royal Navy
Royal Navy
The Royal Navy is the naval warfare service branch of the British Armed Forces. Founded in the 16th century, it is the oldest service branch and is known as the Senior Service...
, which had successfully deployed the Gatling gun
Gatling gun
The Gatling gun is one of the best known early rapid-fire weapons and a forerunner of the modern machine gun. It is well known for its use by the Union forces during the American Civil War in the 1860s, which was the first time it was employed in combat...
, became interested in the weapon, and Gardner was invited to England to exhibit his invention. The Admiralty were so impressed by the demonstrations that they adopted the weapon and purchased the rights to produce it in England. Gardner would remain in England to supervise the construction of the weapons.

The British Army
British Army
The British Army is the land warfare branch of Her Majesty's Armed Forces in the United Kingdom. It came into being with the unification of the Kingdom of England and Scotland into the Kingdom of Great Britain in 1707. The new British Army incorporated Regiments that had already existed in England...
then took an interest in machine guns and after a series of trials selected the Gardner gun. During these tests a five-barrelled Gardner gun fired 16,754 rounds before a failure occurred, with only 24 stoppages. When operator-induced errors were taken into account, there were only 4 malfunctions in 10,000 rounds fired. The Army adopted the weapon, although its introduction was delayed because of opposition from the Royal Artillery
Royal Artillery
The Royal Regiment of Artillery, commonly referred to as the Royal Artillery , is the artillery arm of the British Army. Despite its name, it comprises a number of regiments.-History:...
. It saw action in the Mahdist War
Mahdist War
The Mahdist War was a colonial war of the late 19th century. It was fought between the Mahdist Sudanese and the Egyptian and later British forces. It has also been called the Anglo-Sudan War or the Sudanese Mahdist Revolt. The British have called their part in the conflict the Sudan Campaign...
(in Sudan
Sudan
Sudan , officially the Republic of the Sudan , is a country in North Africa, sometimes considered part of the Middle East politically. It is bordered by Egypt to the north, the Red Sea to the northeast, Eritrea and Ethiopia to the east, South Sudan to the south, the Central African Republic to the...
), notably at the Battle of Abu Klea
Battle of Abu Klea
The Battle of Abu Klea took place between the dates of 16 and 18 January 1885, at Abu Klea, Sudan, between the British Desert Column and Mahdist forces encamped near Abu Klea...
, where its mechanism proved vulnerable to the environmental conditions of loose sand and dust.

There was also the .577/450 Martini-Henry
.577/450 Martini-Henry
The .577/450 Martini-Henry was a black powder, centerfire round used by the British and British Empire militaries prior to the adoption of the .303 calibre cartridge used in the Lee-Metford, Martini-Enfield, and Lee-Enfield series of rifles alongside the Nepalese Bira gun...
calibre Bira gun
Bira gun
The Bira gun was a .577/450 Martini-Henry calibre machine gun designed and manufactured in Nepal during the latter part of the 19th Century. It was a development of, and based upon, the American Gardner gun. It was double barreled, but fed through an overhead drum magazine similar to the later...
, based upon the Gardner gun but with dual barrels, an overhead drum magazine, and designed in Nepal
Nepal
Nepal , officially the Federal Democratic Republic of Nepal, is a landlocked sovereign state located in South Asia. It is located in the Himalayas and bordered to the north by the People's Republic of China, and to the south, east, and west by the Republic of India...
.