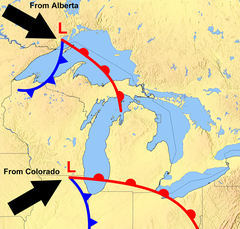 A gale is a very strong wind
Wind
Wind is the flow of gases on a large scale. On Earth, wind consists of the bulk movement of air. In outer space, solar wind is the movement of gases or charged particles from the sun through space, while planetary wind is the outgassing of light chemical elements from a planet's atmosphere into space...
. There are conflicting definitions of how strong a wind must be to be considered a gale. The U.S. government
Federal government of the United States
The federal government of the United States is the national government of the constitutional republic of fifty states that is the United States of America. The federal government comprises three distinct branches of government: a legislative, an executive and a judiciary. These branches and...
's National Weather Service
National Weather Service
The National Weather Service , once known as the Weather Bureau, is one of the six scientific agencies that make up the National Oceanic and Atmospheric Administration of the United States government...
defines a gale as 34–47 knots  of sustained surface winds. Forecasters typically issue gale warning
Gale warning
A gale warning is a warning issued by weather services in maritime locations about the existence of winds of gale force or above or the imminent occurrence of gales at sea...
s when winds of this strength are expected.

Other sources use minimums as low as 28 knots (54.9 km/h) and maximums as high as 90 knots (176.4 km/h). Through 1986, the National Hurricane Center
National Hurricane Center
The National Hurricane Center , located at Florida International University in Miami, Florida, is the division of the National Weather Service responsible for tracking and predicting weather systems within the tropics between the Prime Meridian and the 140th meridian west poleward to the 30th...
used the term gale to refer to winds of tropical  force for coastal areas, between 33 knots (64.7 km/h) and 63 knots (123.5 km/h). The 90 knots (176.4 km/h) definition is very non-standard. A common alternative definition of the maximum is 55 knots (107.8 km/h).

The most common way of measuring winds is with the Beaufort scale
Beaufort scale
The Beaufort Scale is an empirical measure that relates wind speed to observed conditions at sea or on land. Its full name is the Beaufort Wind Force Scale.-History:...
. It is an empirical measure for describing wind speed based mainly on observed sea conditions. Its full name is the Beaufort wind force scale.
The source of this article is wikipedia, the free encyclopedia.  The text of this article is licensed under the GFDL.