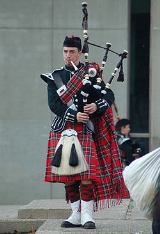 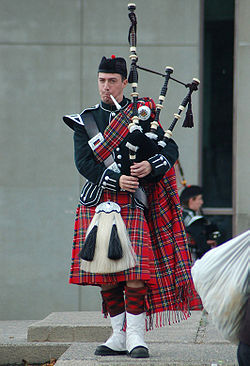 A full plaid is a long piece of tartan
Tartan
Tartan is a pattern consisting of criss-crossed horizontal and vertical bands in multiple colours. Tartans originated in woven wool, but now they are made in many other materials. Tartan is particularly associated with Scotland. Scottish kilts almost always have tartan patterns...
fabric, traditionally worn as part of a full highland dress uniform. It usually matches the tartan of the kilt
Kilt
The kilt is a knee-length garment with pleats at the rear, originating in the traditional dress of men and boys in the Scottish Highlands of the 16th century. Since the 19th century it has become associated with the wider culture of Scotland in general, or with Celtic heritage even more broadly...
. A full plaid is pleat
Pleat
A pleat is a type of fold formed by doubling fabric back upon itself and securing it in place. It is commonly used in clothing and upholstery to gather a wide piece of fabric to a narrower circumference....
ed the whole way, with half of its length sewn shut (so that the pleats cannot open). Its length is almost twice the height of the wearer (about twice the distance from the ground to the wearer's shoulder).

A full plaid is typically only seen on members of pipe bands which elect to wear full dress (military styled) uniforms, and occasionally as formal highland dress.