Encyclopedia
Fuddruckers is an American fast casual
Fast casual restaurant
A fast casual restaurant is a type of restaurant that does not offer full table service, but promises a higher quality of food and atmosphere than a fast food restaurant. In the US, it is a relatively new and growing concept positioned between fast food and casual dining...
, franchised
Franchising
Franchising is the practice of using another firm's successful business model. The word 'franchise' is of anglo-French derivation - from franc- meaning free, and is used both as a noun and as a verb....
, restaurant chain that specializes in hamburger
Hamburger
A hamburger is a sandwich consisting of a cooked patty of ground meat usually placed inside a sliced bread roll...
s. In 2011 Fuddruckers had 56 company-operated restaurants and 129 franchises across the United States with one in Saskatchewan, Canada and four in Puerto Rico
Puerto Rico
Puerto Rico , officially the Commonwealth of Puerto Rico , is an unincorporated territory of the United States, located in the northeastern Caribbean, east of the Dominican Republic and west of both the United States Virgin Islands and the British Virgin Islands.Puerto Rico comprises an...
. Company headquarters is in Houston, Texas.

Fuddruckers was founded as Freddie Fuddruckers in 1979 by Philip J. Romano in San Antonio, Texas
San Antonio, Texas
San Antonio is the seventh-largest city in the United States of America and the second-largest city within the state of Texas, with a population of 1.33 million. Located in the American Southwest and the south–central part of Texas, the city serves as the seat of Bexar County. In 2011,...
, in a location converted to a restaurant from an old bank. He started the chain because he thought that the "world needed a better hamburger." The Fuddruckers concept was to offer large hamburgers in which the meat was ground on-site and buns were baked on the premises and hamburgers and other dishes were offered with "lots of fresh sliced tomatoes, onions, lettuce and vats of cheese sauce." In California, Fuddruckers competed at the high end of the fast food market against chains such as Flakey Jake's, sometimes with head-to-head competitions in places such as Northridge, California. By 1988, there were 150 restaurants in the chain, according to a report in The New York Times
The New York Times
The New York Times is an American daily newspaper founded and continuously published in New York City since 1851. The New York Times has won 106 Pulitzer Prizes, the most of any news organization...
. Romano left the chain in 1988 to found Romano's Macaroni Grill
Romano's Macaroni Grill
Romano's Macaroni Grill is an Italian-style chain of casual dining restaurants with locations throughout the United States, Mexico, and Canada. The first restaurant was founded by Texas restaurateur Philip J. Romano in Leon Springs, Texas, on April 19, 1988. Brinker International bought the...
. In an interview, Romano stated that "I just felt I had done all I could for the concept."

Fuddruckers was purchased in November 1998 by Michael Cannon, and later it was purchased by Magic Brands
Magic Brands
Magic Brands, LLC was the owner of Fuddruckers and Koo Koo Roo and was based in Austin, Texas. The company acquired Fuddruckers in 1998. On April 22, 2010, Magic Brands filed for Chapter 11 bankruptcy protection. On June 18, 2010, Luby's announced it was buying Fuddruckers and Koo Koo Roo, and the...
. The restaurant sometimes made controversial decisions; for example, in 2010 it began enforcing a no-weapons policy, which insisted that patrons should not carry "visible pistols" unless they were security officials. Laws in some U.S. states allow people to carry guns visibly in public. The move was controversial; Fuddruckers management had been concerned that the presence of armed patrons might deter unarmed ones from visiting, but the move caused controversy among pro-gun advocates who threatened to retaliate with boycotts of Fuddruckers restaurants.

The recession beginning in the late 2000s hit the restaurant industry hard, including Fuddruckers. On April 22, 2010, the parent of Fuddruckers, Austin-based Magic Brands LLC, announced plans to file for Chapter 11 bankruptcy protection. It originally planned to sell most of its assets, including Fuddruckers and the Koo Koo Roo brand eateries, to the Tavistock Group
Tavistock Group
Tavistock Group is an international private investment company founded by British businessperson Joe Lewis. The U.S. headquarters is located in Tavistock House in unincorporated Orange County, Florida....
for $40 million. On the same day, the firm announced that 24 Fuddruckers restaurants would be closed.

On June 18, 2010, Tavistock was outbid by Luby's
Luby's
As of March 2011, Luby's, Inc. operates restaurants under the brands Luby's, Fuddruckers and...
for Fuddruckers' assets at auction, with a $61 million winning bid. A second estimate was that the sale amount was for $63 million. Luby's acquisition of Fuddruckers and Koo Koo Roo was finalized during the summer of 2010.

During 2011, there were controversies with previous franchise owners regarding the use of the Fuddruckers brand name, according to the Wall Street Journal. 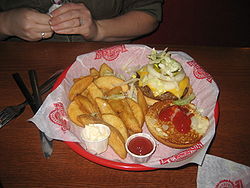 The chain offered the Original Fudds Burger in various sizes, from 1/3 pound, to 1/2 pound, to 2/3 pound, to 1 pound. The primary focus is on hamburgers, but entrees based on poultry and other alternatives were offered.

The firm garnered positive publicity in 2006 by making a very large burger at one of its restaurants. Foxwoods Resort Casino
Foxwoods Resort Casino
Foxwoods Resort Casino is a hotel-casino in Mashantucket, Connecticut, United States. Together with the MGM Grand at Foxwoods, it is one of the largest casino complexes in the world in terms of floor space for gaming. The entire resort comprises of space. The casino has over 380 gaming tables...
's executive sous chef, Scott Ferguson, and Mark Collins made one of the largest commercially available hamburgers — weighing 29.6 pounds and costing US $250 — for the Fuddruckers restaurant in the casino. The burger was 18.5 inches wide and 8 inches tall. According to two sources, this creation was the world's largest commercially available burger in 2006. In 2008, there was a report that the world's biggest burger title had shifted to a sports bar in Michigan
Michigan
Michigan is a U.S. state located in the Great Lakes Region of the United States of America. The name Michigan is the French form of the Ojibwa word mishigamaa, meaning "large water" or "large lake"....
.

The chain experimented with different types of burgers. For example, one restaurant offered an elk burger, but a food critic writing for Slate Magazine, visiting a restaurant in Washington, D.C., was disappointed with the taste and described it as looking "completely grey", and complained about the chain's standards of consistency.

In May 2011, the firm brought back two hamburgers entitled The Southwest and the Swiss Melt as well as another burger entitled the Inferno Burger.

The firm has moved its headquarters location several times. In 2011, the headquarters is the Near Northwest district of Houston, Texas
Houston, Texas
Houston is the fourth-largest city in the United States, and the largest city in the state of Texas. According to the 2010 U.S. Census, the city had a population of 2.1 million people within an area of . Houston is the seat of Harris County and the economic center of , which is the ...
. It has been there since the acquisition by Luby's in the autumn (Northern Hemisphere
Northern Hemisphere
The Northern Hemisphere is the half of a planet that is north of its equator—the word hemisphere literally means “half sphere”. It is also that half of the celestial sphere north of the celestial equator...
) of 2010.

From 2005-2010, Fuddruckers was headquartered in southwest Austin, Texas
Austin, Texas
Austin is the capital city of the U.S. state of :Texas and the seat of Travis County. Located in Central Texas on the eastern edge of the American Southwest, it is the fourth-largest city in Texas and the 14th most populous city in the United States. It was the third-fastest-growing large city in...
; before that, in One Corporate Place in Danvers, Massachusetts
Danvers, Massachusetts
Danvers is a town in Essex County, Massachusetts, United States. Located on the Danvers River near the northeastern coast of Massachusetts, Danvers is most widely known for its association with the 1692 Salem witch trials, and for its famous asylum, the Danvers State Hospital.-17th century:The land...
; before that, in Beverly, Massachusetts
Beverly, Massachusetts
Beverly is a city in Essex County, Massachusetts, United States. The population was 39,343 on , which differs by no more than several hundred from the 39,862 obtained in the 2000 census. A resort, residential and manufacturing community on the North Shore, Beverly includes Beverly Farms and Prides...
. When it shifted headquarters from the Boston area to Austin in 2005, it spent $1 million and laid off 30 employees which allowed the firm to operate more "efficiently" according to chief financial officer Matt Pannek.

Within six weeks of the move, the company hired 30 new employees for the Austin headquarters. By September 2005 the company employed 80 people in 16000 square foot of space in two temporary offices in the Monterey Oaks Corporate Park in southwest Austin. By December of 2005 the company planned to move into about 16000 square foot-17000 square foot of space in an adjacent building and turn one of the original Austin facilities into a training center and test kitchen. Pannek said that the central location of the headquarters allows the company to more easily communicate with its franchisees across the United States.