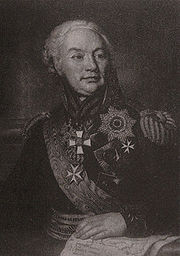 Friedrich Wilhelm Count von Buxhoevden (September 14, 1750 – August 23, 1811) was a Russian
Russian Empire
The Russian Empire was a state that existed from 1721 until the Russian Revolution of 1917. It was the successor to the Tsardom of Russia and the predecessor of the Soviet Union...
Infantry
Imperial Russian Army
The Imperial Russian Army was the land armed force of the Russian Empire, active from around 1721 to the Russian Revolution of 1917. In the early 1850s, the Russian army consisted of around 938,731 regular soldiers and 245,850 irregulars . Until the time of military reform of Dmitry Milyutin in...
General
General
A general officer is an officer of high military rank, usually in the army, and in some nations, the air force. The term is widely used by many nations of the world, and when a country uses a different term, there is an equivalent title given....
and a government official. Buxhoeveden commanded the Russian armies during the Finnish War
Finnish War
The Finnish War was fought between Sweden and the Russian Empire from February 1808 to September 1809. As a result of the war, the eastern third of Sweden was established as the autonomous Grand Duchy of Finland within the Russian Empire...
.

The Buxhoevedens were a Baltic German
Baltic German
The Baltic Germans were mostly ethnically German inhabitants of the eastern shore of the Baltic Sea, which today form the countries of Estonia and Latvia. The Baltic German population never made up more than 10% of the total. They formed the social, commercial, political and cultural élite in...
family from Estonia
Estonia
Estonia , officially the Republic of Estonia , is a state in the Baltic region of Northern Europe. It is bordered to the north by the Gulf of Finland, to the west by the Baltic Sea, to the south by Latvia , and to the east by Lake Peipsi and the Russian Federation . Across the Baltic Sea lies...
, with roots tracing to Bexhövede, Lower Saxony
Lower Saxony
Lower Saxony is a German state situated in north-western Germany and is second in area and fourth in population among the sixteen states of Germany...
. His wife, countess Natalie, was the illicit daughter of Grigori Orlov by a lady of the court, but her mother – contrary to some claims – was not Empress Catherine, instead just a member of the Apraksin family. Buxhoeveden's granddaughter Varvara Nelidova
Varvara Nelidova
Varvara Arkadyevna Nelidova was a mistress of Nicholas I of Russia from 1832 until his death in 1855. Her aunt Yekaterina Nelidova was a mistress of Nicholas's father Paul, and her maternal grandfather was Count Friedrich Wilhelm von Buxhoeveden.Nelidova's liaison with the Emperor was kept more or...
was a mistress of Nicholas I of Russia
Nicholas I of Russia
Nicholas I , was the Emperor of Russia from 1825 until 1855, known as one of the most reactionary of the Russian monarchs. On the eve of his death, the Russian Empire reached its historical zenith spanning over 20 million square kilometers...
for no less than 17 years.

Buxhoevden took part in the Battle of Austerlitz
Battle of Austerlitz
The Battle of Austerlitz, also known as the Battle of the Three Emperors, was one of Napoleon's greatest victories, where the French Empire effectively crushed the Third Coalition...
as a commander, contributing to the Allied failure to defeat Napoleon by being drunk during the battle. In 1808 he served as Commander-in-Chief in conquest of Finland
Finland
Finland , officially the Republic of Finland, is a Nordic country situated in the Fennoscandian region of Northern Europe. It is bordered by Sweden in the west, Norway in the north and Russia in the east, while Estonia lies to its south across the Gulf of Finland.Around 5.4 million people reside...
and led Russian troops during the initial battles of Finnish War
Finnish War
The Finnish War was fought between Sweden and the Russian Empire from February 1808 to September 1809. As a result of the war, the eastern third of Sweden was established as the autonomous Grand Duchy of Finland within the Russian Empire...
.

He received the castle and lands of Koluvere, after Duchess Augusta of Brunswick-Wolfenbüttel had deceased there in 1786 as outcome of foul play. Another of his manors was Ligovo
Ligovo
Ligovo is historical area of the federal city of Saint Petersburg . It is located in the southern part of the city on the road leading to Petergof....
near St. Petersburg.