Freedom Square in Kharkiv
Kharkiv
Kharkiv or Kharkov is the second-largest city in Ukraine.The city was founded in 1654 and was a major centre of Ukrainian culture in the Russian Empire. Kharkiv became the first city in Ukraine where the Ukrainian Soviet Socialist Republic was proclaimed in December 1917 and Soviet government was...
is the 6-th largest city-centre square in Europe
Europe
Europe is, by convention, one of the world's seven continents. Comprising the westernmost peninsula of Eurasia, Europe is generally 'divided' from Asia to its east by the watershed divides of the Ural and Caucasus Mountains, the Ural River, the Caspian and Black Seas, and the waterways connecting...
.

Originally named (1926–1996) Dzerzhinsky Square after Felix Dzerzhinsky, the founder of the Bolshevik secret police (the Cheka
Cheka
Cheka was the first of a succession of Soviet state security organizations. It was created by a decree issued on December 20, 1917, by Vladimir Lenin and subsequently led by aristocrat-turned-communist Felix Dzerzhinsky...
, precursor to the KGB
KGB
The KGB was the commonly used acronym for the . It was the national security agency of the Soviet Union from 1954 until 1991, and was the premier internal security, intelligence, and secret police organization during that time.The State Security Agency of the Republic of Belarus currently uses the...
), it was renamed after Ukraine became independent in 1991.
A monumental statue of Lenin was erected in 1964 and continues to dominate the square. 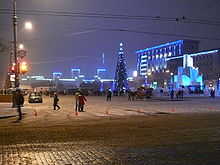