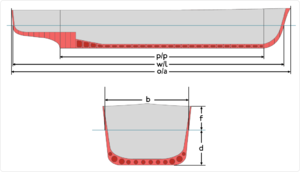 In sailing
Sailing
Sailing is the propulsion of a vehicle and the control of its movement with large foils called sails. By changing the rigging, rudder, and sometimes the keel or centre board, a sailor manages the force of the wind on the sails in order to move the boat relative to its surrounding medium and...
and boating
Boating
Boating is the leisurely activity of travelling by boat, or the recreational use of a boat whether powerboats, sailboats, or man-powered vessels , focused on the travel itself, as well as sports activities, such as fishing or water skiing...
, freeboard
means the distance from the waterline
Waterline
The term "waterline" generally refers to the line where the hull of a ship meets the water surface. It is also the name of a special marking, also known as the national Load Line or Plimsoll Line, to be positioned amidships, that indicates the draft of the ship and the legal limit to which a ship...
to the upper deck
Deck (ship)
A deck is a permanent covering over a compartment or a hull of a ship. On a boat or ship, the primary deck is the horizontal structure which forms the 'roof' for the hull, which both strengthens the hull and serves as the primary working surface...
level, measured at the lowest point of sheer
Sheer (ship)
The sheer is a measure of longitudinal main deck curvature, in naval architecture.The practice of building sheer into a ship dates back to the era of small sailing ships. These vessels were built with the decks curving upwards at the bow and stern in order to increase stability by preventing the...
where water can enter the boat
Boat
A boat is a watercraft of any size designed to float or plane, to provide passage across water. Usually this water will be inland or in protected coastal areas. However, boats such as the whaleboat were designed to be operated from a ship in an offshore environment. In naval terms, a boat is a...
or ship
Ship
Since the end of the age of sail a ship has been any large buoyant marine vessel. Ships are generally distinguished from boats based on size and cargo or passenger capacity. Ships are used on lakes, seas, and rivers for a variety of activities, such as the transport of people or goods, fishing,...
. In commercial vessels, the latter criteria measured relative to the Ship's load line, regardless of deck arrangements is the mandated and regulated meaning.

In yachts, a low freeboard is often found on racing boats
Boat racing
-Types:* Canoe racing, competitive forms of canoeing and kayaking* Drag boat racing, a form of drag racing which takes place on water rather than land* Dragon boat racing, a type of human-powered watercraft racing...
, for weight reduction and therefore increased speed. A higher freeboard will give more room in the cabin
Cabin (ship)
A cabin or berthing is an enclosed space generally on a ship or an aircraft. A cabin which protrudes above the level of a ship's deck may be referred to as a "deckhouse."-Sailing ships:...
, but will increase weight and may compromise speed. A higher freeboard also helps weather waves and reduce the likelihood of green seas on the weather deck. A low freeboard boat is susceptible to swamping in rough seas. Freighter ships and warship
Warship
A warship is a ship that is built and primarily intended for combat. Warships are usually built in a completely different way from merchant ships. As well as being armed, warships are designed to withstand damage and are usually faster and more maneuvrable than merchant ships...
s use high-freeboard designs to increase internal volume which also allows them to satisfy IMO
International Maritime Organization
The International Maritime Organization , formerly known as the Inter-Governmental Maritime Consultative Organization , was established in Geneva in 1948, and came into force ten years later, meeting for the first time in 1959...
damage stability regulations due to increased reserved buoyancy.
The source of this article is wikipedia, the free encyclopedia.  The text of this article is licensed under the GFDL.