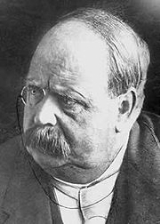 Encyclopedia
The Free Trade Party which was officially known as the Australian Free Trade and Liberal Association, also referred to as the Revenue Tariff Party in some states and renamed the Anti-Socialist Party in 1906, was an Australia
Australia
Australia , officially the Commonwealth of Australia, is a country in the Southern Hemisphere comprising the mainland of the Australian continent, the island of Tasmania, and numerous smaller islands in the Indian and Pacific Oceans. It is the world's sixth-largest country by total area...
n political party, formally organised between 1889 and 1909. It advocated the abolition of protectionism
Protectionism
Protectionism is the economic policy of restraining trade between states through methods such as tariffs on imported goods, restrictive quotas, and a variety of other government regulations designed to allow "fair competition" between imports and goods and services produced domestically.This...
, especially protective tariffs and other restrictions on trade, arguing that this would create greater prosperity for all. However, many members also advocated use of minimal tariffs for government revenue
Revenue
In business, revenue is income that a company receives from its normal business activities, usually from the sale of goods and services to customers. In many countries, such as the United Kingdom, revenue is referred to as turnover....
purposes only.

In the elections for the first Commonwealth Parliament
Parliament of Australia
The Parliament of Australia, also known as the Commonwealth Parliament or Federal Parliament, is the legislative branch of the government of Australia. It is bicameral, largely modelled in the Westminster tradition, but with some influences from the United States Congress...
, the Free Traders, who campaigned in some states as the "revenue tariff party", formed the second largest group in the Australian House of Representatives
Australian House of Representatives
The House of Representatives is one of the two houses of the Parliament of Australia; it is the lower house; the upper house is the Senate. Members of Parliament serve for terms of approximately three years....
, with 25 seats. Reid became the Parliament's first Opposition Leader with William McMillan
William McMillan (Australian politician)
Sir William McMillan KCMG was an Australian politician and businessman. Alfred Deakin said he was a "thoughtful, educated businessman, narrow and cold after the manner of the Manchester School … business-like in manner and incisive in debate".McMillan was born in Derry, Ireland and...
as his deputy, later becoming Prime Minister
Prime Minister of Australia
The Prime Minister of the Commonwealth of Australia is the highest minister of the Crown, leader of the Cabinet and Head of Her Majesty's Australian Government, holding office on commission from the Governor-General of Australia. The office of Prime Minister is, in practice, the most powerful...
in 1904-05. Joseph Cook
Joseph Cook
Sir Joseph Cook, GCMG was an Australian politician and the sixth Prime Minister of Australia. Born as Joseph Cooke and working in the coal mines of Silverdale, Staffordshire during his early life, he emigrated to Lithgow, New South Wales during the late 1880s, and became General-Secretary of the...
became deputy leader of the party on McMillan's retirement in 1903.

A separate Tasmanian Revenue Tariff Party contested the 1903 federal election in Tasmania and won two seats but also sat and merged with the Free Trade Party in federal parliament.

After the question of tariffs had largely been settled, Reid cast around for another cause to justify his party's existence. He settled on opposition to socialism
Socialism
Socialism is an economic system characterized by social ownership of the means of production and cooperative management of the economy; or a political philosophy advocating such a system. "Social ownership" may refer to any one of, or a combination of, the following: cooperative enterprises,...
, criticising both the Australian Labor Party
Australian Labor Party
The Australian Labor Party is an Australian political party. It has been the governing party of the Commonwealth of Australia since the 2007 federal election. Julia Gillard is the party's federal parliamentary leader and Prime Minister of Australia...
and the support offered to it by the Protectionist Party
Protectionist Party
The Protectionist Party was an Australian political party, formally organised from 1889 until 1909, with policies centred on protectionism. It argued that Australia needed protective tariffs to allow Australian industry to grow and provide employment. It had its greatest strength in Victoria and in...
, led by Alfred Deakin
Alfred Deakin
Alfred Deakin , Australian politician, was a leader of the movement for Australian federation and later the second Prime Minister of Australia. In the last quarter of the 19th century, Deakin was a major contributor to the establishment of liberal reforms in the colony of Victoria, including the...
. The Free Trade Party was eventually renamed the Anti-Socialist Party (ASP) before the 1906 federal election. The Labor Party and the FTP/ASP continued to grow in electoral strength at the expense of the Protectionist vote. Some Protectionists continued their exodus to Labor and the ASP. 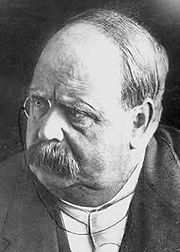