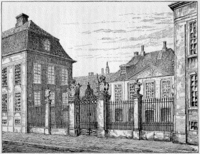 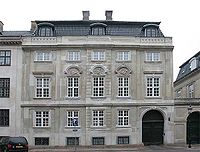 The royal Frederiks Hospital was Denmark
Denmark
Denmark is a Scandinavian country in Northern Europe. The countries of Denmark and Greenland, as well as the Faroe Islands, constitute the Kingdom of Denmark . It is the southernmost of the Nordic countries, southwest of Sweden and south of Norway, and bordered to the south by Germany. Denmark...
's first hospital
Hospital
A hospital is a health care institution providing patient treatment by specialized staff and equipment. Hospitals often, but not always, provide for inpatient care or longer-term patient stays....
in the present-day meaning of the word. It was founded by king Frederik V
Frederick V of Denmark
Frederick V was king of Denmark and Norway from 1746, son of Christian VI of Denmark and Sophia Magdalen of Brandenburg-Kulmbach.-Early life:...
and financed by the earnings from the Norwegian Postal Service
Posten (Norway)
Posten Norge or Norway Post is the name of the Norwegian postal service. The word posten means the post or the mail in Norwegian. The company, owned by the Norwegian Ministry of Transport and Communications holds a monopoly on distribution of mail throughout the country.-History:Posten was founded...
.

The buildings, situated in Bredgade
Bredgade
Bredgade is one of the most prominent streets in Copenhagen, Denmark. Running in a straight line from Kongens Nytorv for just under one kilometre to the intersection of Esplanaden and Grønningen, it is one of the major streets in Frederiksstaden, a Rococo district laid out in the middle of the...
in Copenhagen
Copenhagen
Copenhagen is the capital and largest city of Denmark, with an urban population of 1,199,224 and a metropolitan population of 1,930,260 . With the completion of the transnational Øresund Bridge in 2000, Copenhagen has become the centre of the increasingly integrating Øresund Region...
and currently housing the Danish Museum of Art & Design, were, along with the rest of Frederiksstaden
Frederiksstaden
Frederiksstaden is a district in Copenhagen, Denmark. Constructed during the reign of Frederick V in the second half of the 18th century and it is considered to be one of the most important rococo complexes in Europe....
, designed by Nicolai Eigtved
Nicolai Eigtved
Nicolai Eigtved, also known as Niels Eigtved, , Danish architect, introduced and was the leading proponent of the French rococo style in Danish architecture during the 1730s-1740s. He designed and built some of the most prominent buildings of his time, a number of which still stand to this day...
and Lauritz de Thurah
Lauritz de Thurah
Laurids Lauridsen de Thurah, known as Lauritz de Thurah , was a Danish architect and architectural writer. He became the most important Danish architect of the late baroque period...
and built in 1752-1757. It opened on March 31, 1757 on the birthday of Frederick V.

Until 1848 Frederiks Hospital was managed by the Danish Chancellory, from 1848 to 1871 by the Ministry of Justice and from there on by the Ministry of Church and Education. On November 11, 1855, the philosopher Søren Kierkegaard
Søren Kierkegaard
Søren Aabye Kierkegaard was a Danish Christian philosopher, theologian and religious author. He was a critic of idealist intellectuals and philosophers of his time, such as Georg Wilhelm Friedrich Hegel, Friedrich Wilhelm Joseph Schelling and Karl Wilhelm Friedrich Schlegel...
died here.